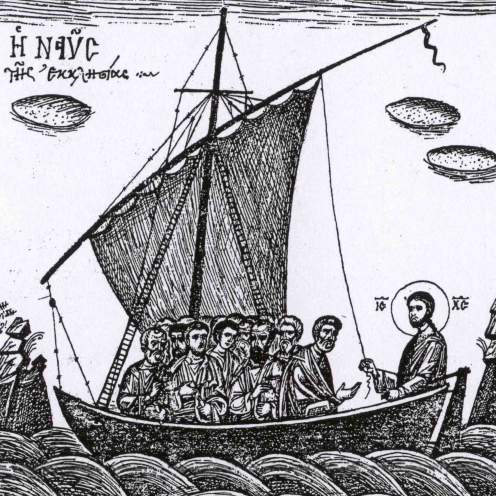 “What we have heard, what we have seen with our eyes, what we looked upon and touched with our hands—We proclaim now to you” (1 St. John 1:1).

Behold, such is the apostolic preaching! The apostles do not speak as worldly sages, nor like philosophers and even less as theoreticians who make suppositions about something in order to discover something. The apostles speak about things which they have not sought but which unexpectedly surrounded them; about the fact which they did not discover but, so to speak, unexpectedly found them and seized them. They did not occupy themselves with spiritual researches nor have they studied psychology, neither did they, much less, occupy themselves with spiritism. Their occupation was fishing – one totally experiential physical occupation. While they were fishing, the God-Man [Jesus] appeared to them and cautiously and slowly introduced them to a new vocation in the service of Himself. At first, they did not believe Him but they, still more cautiously and slowly with fear and hesitation and much wavering, came toward Him and recognized Him. Until the apostles saw Him many times with their own eyes and until they discussed Him many times among themselves and, until they felt Him with their own hands, their experienced fact is supernatural but their method of recognizing this fact is thoroughly sensory and positively learned. Not even one contemporary scholar would be able to use a more positive method to know Christ. The apostles saw not only one miracle but numerous miracles. They heard not only one lesson but many lessons which could not be contained in numerous books. They saw the resurrected Lord for forty days; they walked with Him, they conversed with Him, they ate with Him, and they touched Him. In a word: they personally and first handedly had thousands of wondrous facts by which they learned and confirmed one great fact, i.e., that Christ is the God-Man, the Son of the Living God, the Man-loving Savior of mankind and the All-Powerful Judge of the living and the dead.

O Resurrected Lord confirm us in the faith and ardor of Your Holy Apostles.

christ in our midst!