by Monk Joseph of Dionysiou Monastery 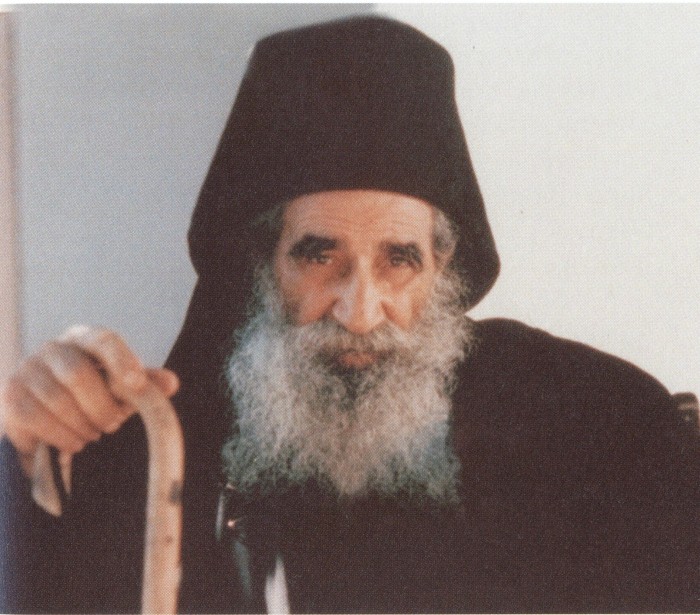 It is not easy to describe in a few pages the life and works of a great ascetic of the might of blessed Elder Arsenios. He was born in Pontos. While still young he was burning with Holy zeal. He decided to leave his country and walk from Russia to Constantinoupole and from there to the Holy Land, where he served at the Holy Sepulchre and at other Holy places for almost ten years. 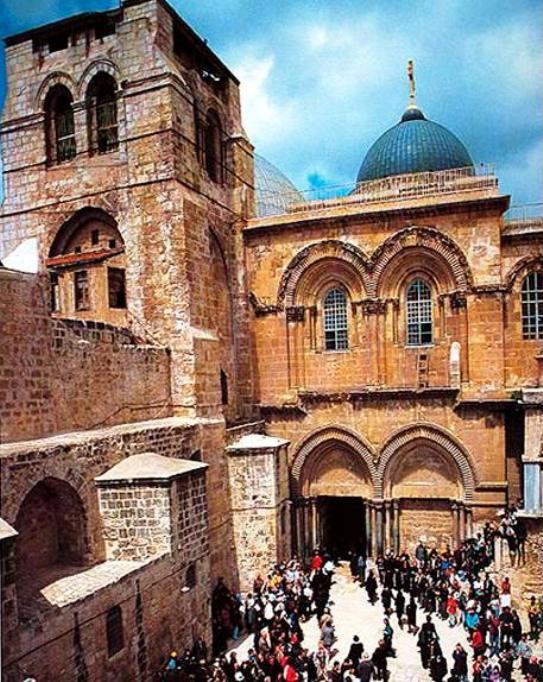 The Church of the Holy Resurrection in Jerusalem, where blessed Elder Arsenios served for more than ten years (among other Holy places)

There, it was God’s will to meet with the well known great ascetic of Egina, Ieronymos, from whom he received the higher teachings of monastic life. 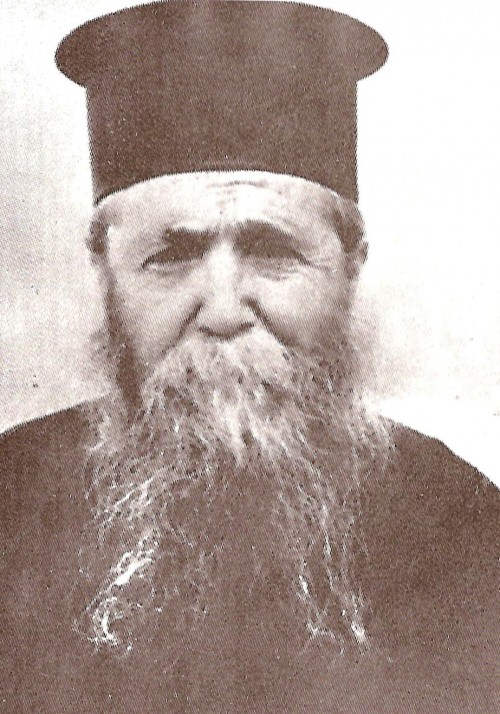 His soul, thirsty and burning with Holy adoration, was calling together with David: “Truly my soul waits upon God, from Him comes my salvation. He alone is my rock and my salvation, He is my fortress, I shall never be shaken”. He then left the wiles of the world and ascended to Mount Athos, the Holy garden of our Lady.

While totally submitting himself to the guidance of the Holy Spirit, initially he stayed for a few years at the Holy Monastery of Stavronikita where he received the holy schema of the monk and was renamed Arsenios from Anatolios, which was the name he received at his tonsure in Jerusalem. 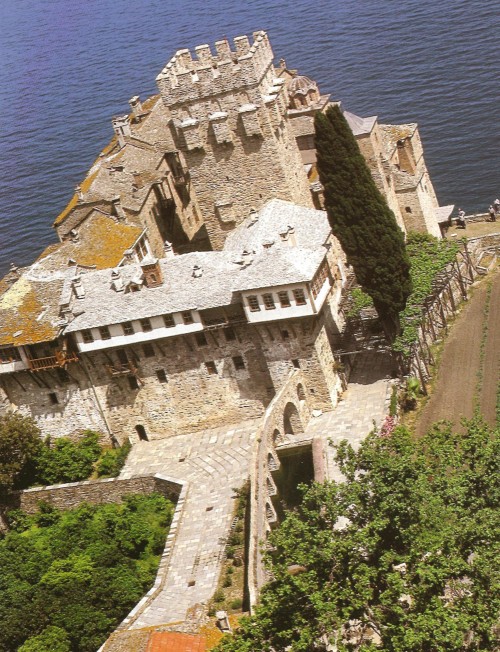 Fr Arsenios took advantage of the then unruly state of the monastery and he began practicing tougher and higher struggles by himself.

However, he was so keen for more difficult struggles that he decided to reach deeper into the slopes of the Holy Mountain, to look for ascetics who would be able not only to teach but also show him the road to perfection.

The Lord saw his genuine desire, and did not take long to reveal to him that which he most wanted. And what he wanted was another young man, who was also looking for the same thing with the same fervor. These two young people met for the first time high on the summit of Mount Athos. As the magnet captures the iron, likewise the Holy Spirit drew them together. They then remained together in Spirit as companions and never parted from one another in accordance with the promise they made until death separated them.

The other young man, was the later renowned great ascetic of the 20th Century, Joseph the Hesychast, who was then called by his Christian name, Franciscos (Francis) Kottis. 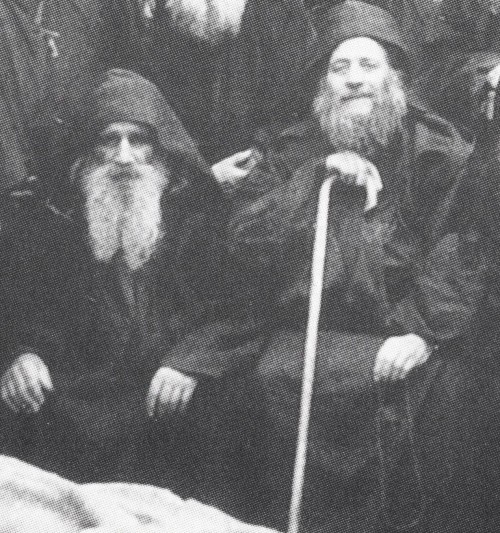 The blessed elders Arsenios( on the left) and Joseph ( on the right), Spileotes and Hesychasts, who remained together for 40 years. This is a detail of a larger picture

These two young people, became like bees and collected whatever exceptional goodness they could find in the desert of the Holy Mountain in order to harvest the sweetest fruits of the Holy Spirit.

They first met with the well known elder Daniel Kantounakioti, with Kallinikos the Hesychast, with Yerasimos, Ignat and other sweet smelling flowers of the desert. 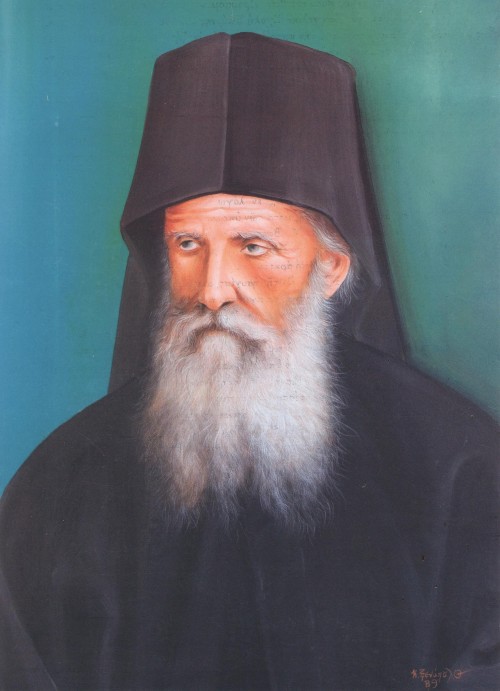 In one of his letters, Father Joseph writes:”I counted the caves of the entire Mount Athos step by step, looking for a spiritual father who was going to teach me the spiritual theory and practice”.

Finally they encountered the most special rose of the desert, Fr Daniel the Hesychast, who was living high in the cave of St Peter’s.

This ascetic was having the Holy liturgy every midnight, lasting 3-4 hours. It was taking this long because he was feeling great reverence and was taking small breaks while the earth was getting muddy from his constant tears. This elder had many virtues among them the charisma of foreseeing. For the whole year he was eating uncooked food once a day only.

This was copied by elders Joseph and Arsenios as well as the all night vigils which they performed every night for the rest of their lives.

During the all night vigil, Fr Arsenios confided in me that he was kneeling three thousand times every night. For the rest of the evening he was standing up. Neither of them ever rested on a bed. However, after the end of the vigil they would only allow themselves to sit at a small bench to rest.

Their food usually consisted of some dried bread, most of the time stale and molded and was eaten only once a day. During the weekend they would eat whatever was available, except meat and even that only once a day. 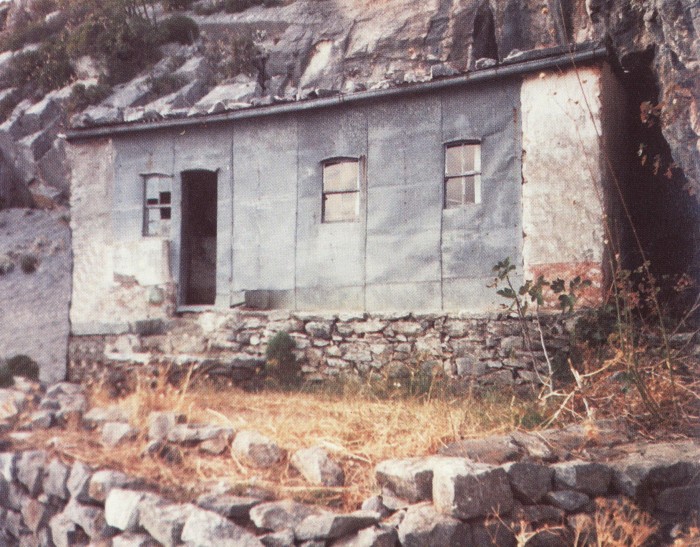 The chapel of St John the Baptist, Prodromos, at the Skete of Saint Basil

Fr Arsenios was also undertaking all the manual work. During their first years high at Saint Basil cave, Fr Arsenios was going up and down the mountain, which meant 1-2 hours steep climb, ferrying supplies not only for themselves but also for all the other ascetics. He was also carrying on his shoulders stones and other building materials to repair and conserve the stone fences and huts.

Since this hard work was beyond human ability, I once asked him how did he do it and he confided that as soon as he would ask for his elder’s blessing, the load would get lighter and a mighty force would push him so that he would easily ascend the steep mountain; even more so during the mighty heat of the summer. At the same time he would whisper the Jesus prayer nonstop.

As for their clothing, the two ascetics were dressed with rugs in winter or summer and were without shoes, so that many were regarding them as “crazy”. They were not crazy in the common meaning of the word but ”crazy” in Christ.

In the words of St Paul: “They went about in sheepskins and goatskins, destitute, persecuted and ill treated- the world was not worthy of them”. (Heb.11.37-38) 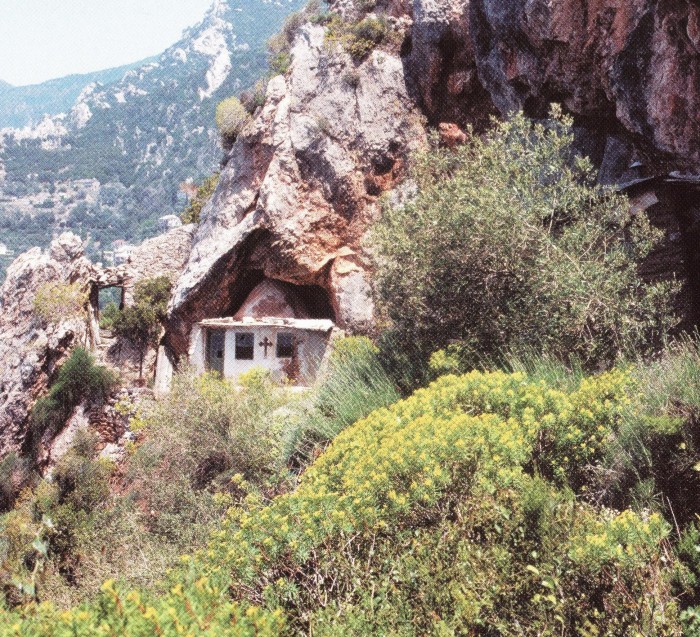 The chapel of Saint John the Baptist, Prodromos, in the cave of Saint Anne

In 1938, these two great ascetics having lived for twenty years high in the Skete of Saint Basil, decided to descend to the Little Saint Anne together with their small brotherhood who had already been assembled . They stayed there until 1953. Afterwards they descended even lower towards the New Skete. The great ascetic Joseph had already gone to Heaven in 1959. I never had the blessing to meet him. But in 1964 I was blessed in getting to meet Fr Arsenios. 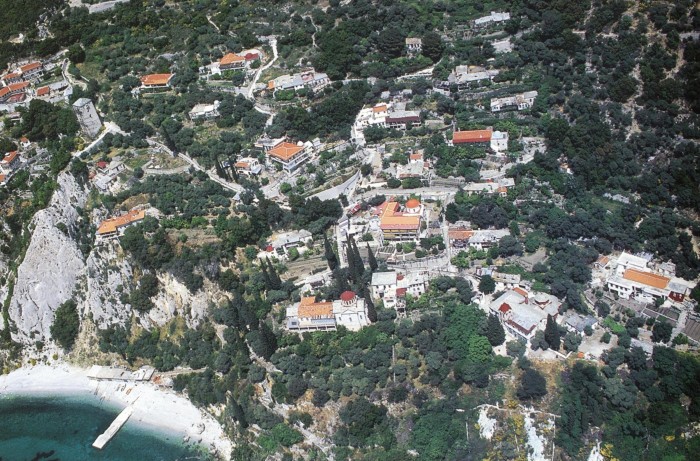 I lived with Fr Arsenios for eighteen years. I got to be acquainted with his virtues, the rich fruits of the Holy Spirit: love, happiness, peacefulness etc but especially his blessed simplemindedness and lack of animosity, his straightforwardness, sincerity and great humility, his enormous love for discipline and many others.

I will be left with no time if I was to describe the incredible life of this great ascetic. But the limited space will not allow me to do this. As a conclusion, however, I will recite instead some pages from the book: “ Elder Arsenios Spileotis” written by another special member of their group, blessed Elder Joseph of Vatopedi:

“One could apply to Elder Arsenios what the Scriptures said “here is a true Israelite, in whom there is nothing false”. He was by nature direct, simple, harmless, meek, obedient and an extraordinary, hard working spiritual fighter, who had not a single material possession. One could say that he was simply a “Yes” or a “No” man.

He was meticulous in his obedience and because of this and his absolute faith in his Elder, he lived his days beyond the laws of nature.

When he was holding an all night vigil, he would start in the early evening and wear himself out kneeling thousands of times with the face down and standing up all night until the morning.

He was concentrating on saying Jesus prayer so intensely that on several occasions it was time to start work and he would not let go of the prayer. Then we had to call him from outside his window and we would see that he was standing up and elevated.

-Yeronda, it is time to start work. And father Arsenios coming to himself would curiously ask:

-Is it morning already?” 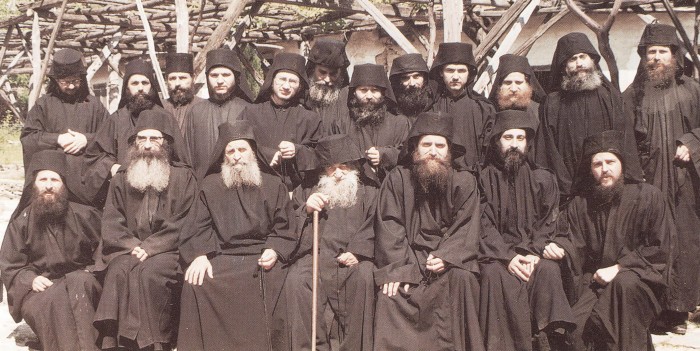 The brotherhood of Fr Arsenios the Hesychast near Karyes, at the cell of Saint Nicholas Bourazeri (belongs to Holy Monastery of Hilandariou), during 1967-1979

I lived three years with this holy grandpa in New Skete; twelve years at the Hilandarino house “Bourazeri” and during the last three years of his life at the charitable monastery of Dionysiou, whereby my blessed father Charalambos was invited to be in charge and become the Abbot because of its lack of monks. This monastery is named after Saint John the Baptist. 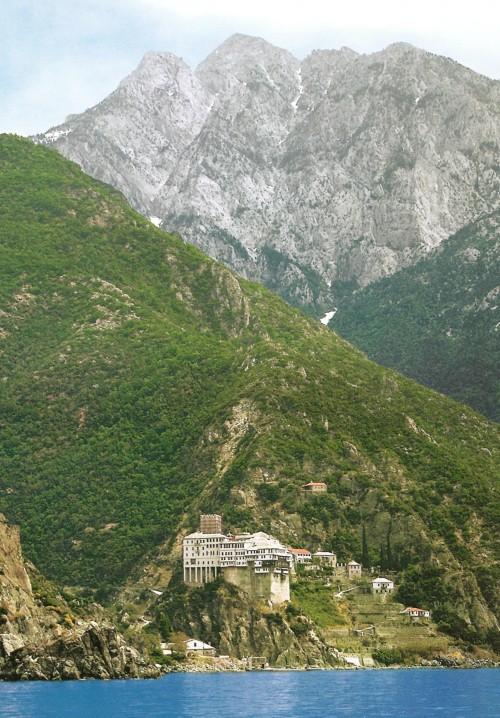 Let us have his prayers. 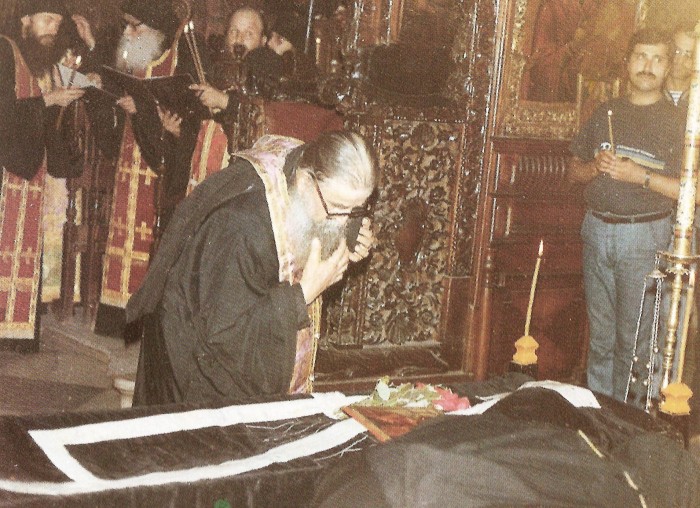 The Most Holy Archmandrite Charalambos (then Abbot) of the Holy Monastery of Dionysiou gives the last embrace to the late, blessed elder Arsenios