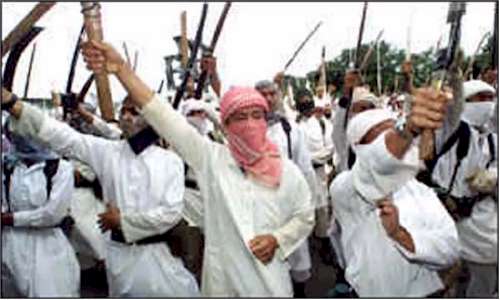 The Muslim assassin Mehmet Ali Agca wrote before shooting John Paul II: “I have decided to kill John Paul II, the supreme commander of the Crusades.” [!!!]

How many days have we awakened recently to news of another attack on Christians? The attacks have accelerated alarmingly. To name but a few sites where persecution has occurred: Nigeria, India, Pakistan, Egypt, Iran.

In Nigeria near Jos, just one month ago, Islamic assailants killed 300 or more Christians. The slaughter of mostly women and children was carried out by machete wielding Muslims. They burned some 75 houses. This rampage was only the latest in a series of attacks in the region. The Muslim minority has been contesting ownership of some lands. As police conducted investigations, they arrested Christians for questioning.

In Islamabad, also in March, suspected Islamic militants armed with guns and grenades stormed the offices of World Vision International, a Christian relief and development organization working with children, families and communities to overcome poverty. The Muslims killed six and wounded seven other employees. “They gathered all of us in one room,” said an administrator who was in the office at the time. “Gunmen, some of whom had their faces covered, dragged people one by one to an adjacent room and shot and killed them.”

Coptic Christians have been victims of attack in Egypt for many decades. In late November 2009 several days of looting, vandalizing and burning of Coptic properties occurred. According to many witnesses the mob in Favshoot, 300 miles from Cairo, made wooden crosses and burnt them in the streets. Nearly 3,000 angry Muslims damaged and looted 50 shops — all owned by Christians. A Coptic priest, Rev. Benjamin Noshi, was beaten and is hospitalized with a skull fracture.

In Iraq, thousands of Christians have fled the country to escape violent persecution. Currently, in Iran, authorities have detained more than a dozen Christians who are held without substantiated charges. Iran’s constitution defines Islam as the state religion.

These are only a sample of the horrors being perpetrated on Christians in the name of Allah.

Our friend, William Kilpatrick, believes our elites cover up for what really goes on. Elites in government and schools take a mistaken view of the causes of Islamic militancy, subscribing to the view of history that somehow the Crusades are responsible for militant hatred toward Christians.

Robert Louis Wilkin, professor emeritus of the history of Christianity at the University of Virginia, concurs. “The recorded past and remembered past are seldom the same,” he recently wrote. In his view the understanding of the Crusades today is largely invented or imagined. The new paradigm is that the Crusades were Western Christian aggression, not a defensive movement of Christian piety. Wilkin fears the writings of mere historians can do little to undo the damage.

Jonathan Riley Smith, an historian of the Crusades, has said he had given up hope that scholarly writing could make a difference. Try watching the History Channel on the topic or ask a school age student what he learned of the Crusades. It is most likely a tale of knightly butchery. Yet the Crusades offer a cornucopia of stories and images — of bravery and cruelty, honor and duplicity — that can be used to serve different ends.

Perhaps we should bone up on key events such as the capture of Jerusalem by the Franks in 1099, the retaking of the city by the Muslims, and the Fourth Crusade on Constantinople; the personalities of Richard the Lionhearted, the Holy Roman Emperor Frederick II and Saladin, the Muslim leader.

In the year 600, the Middle East — from present-day Turkey to Iraq, including Egypt and the southern Mediterranean coast — was Christian, and its principal cities including Alexandria, Antioch, Damascus and Jerusalem were vibrant centers of Christian life. But, in a century, the entire region came under Muslim rule. The Crusades were, in fact, a counter-offensive of Western Christians to come to the aid of Eastern Christians in defending their lands against further expansion of Islam and to free the holy city of Jerusalem from Muslim rule.

Islam is clearly on the march again and we Christians need to understand its history. Fortunately there are two new books on the subject: “Holy Warriors” by Jonathan Phillips and “The Crusades” by Thomas Asbridge. At the very least, these books offer a rebuttal to the current orthodoxy on the issue being presented in our schools and on television.

Kevin and Marilyn Ryan edited “Why I Am Still a Catholic” [Riverhead Books, 1998] and live in Chestnut Hill, Mass.