The human soul without Him becomes hell.

The human soul without Him becomes hell. 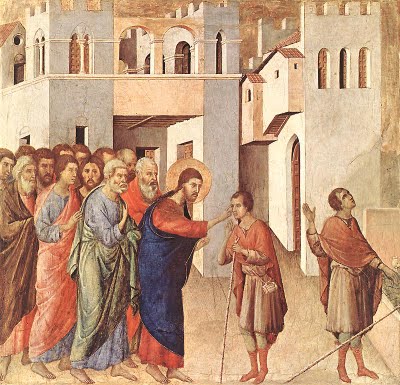 Sunday of the blind man

What does it mean to have Christ as the light of the world or, on a more personal level, to have Christ as the light of our lives? In order to understand what it means to have Christ as our light, we must first acknowledge our own blindness. Like the man in the Gospel, most of us have been born blind when it comes to God and His Christ. We are unable to see that which is directly in front of us. Our Lord describes this type of blindness in the Gospel of Saint Mark: “That seeing they may see, and not perceive; and hearing they may hear, and not understand; lest at any time they should be converted, and their sins should be forgiven them.” (Mark 4:12) This is truly describes our state of spiritual blindness.

Did mankind always have this spiritual blindness, or what changed to create this blindness? This question is similar to the disciples question in the Gospel: “Who sinned, this man or his parents, that he was born blind?” (John 9:2) Our Lord’s answer to this question is: “Neither this man nor his parents sinned, but that the works of God should be revealed in him.” (John 9:3) In the beginning, God created the world. The world came forth from God and was created from God. The Gospel of Saint John reminds us that just before the moment of creation when it says, “In the beginning was the Word, and the Word was with God, and the Word was God. (John 1:1) Then God spoke the Word and said let there be light. God not only spoke the Word and there was light, but God spoke the Word and there was all of creation.

What or, more properly, who is this Word?

This Word is our Lord God and Savior Jesus Christ. We are reminded of this in the hymn of the second antiphon: “Only begotten Son and immortal Word of God…”

Thus, everything that is created is of Christ and one with Him in its naturally created state. When Adam and Eve exerted their own will over the will of their creator, they changed this natural relationship. The result was a world in which death and sickness ruled.

The Son of God, the incarnate Word of God, entered into this world created by man, through the exertion of mans will over God’s, to restore it back to its natural created state.

In today’s Gospel, we see the action of the Word of God. We see the Word as creator through Jesus’ action of taking clay and anointing the man’s eyes with it. The fathers speak of this action taken by Jesus, saying that He created eyes for this man by taking the same actions that were taken when man was first created. Through the clay that was formed from the spittle from the Lord’s mouth, we see the creative action that that proceeds from the mouth of God through His Word.

The Lord Jesus after anointing the man’s eyes sends him to the pool of Siloam to wash. This first shows that we must cooperate with God in order to receive the gifts of God. God loves us and wants us to receive salvation through Him, but if we fail to take action we will never obtain salvation.

Secondly, this washing shows all healing comes from our Lord Jesus Christ. This is seen through the interpretation of the name Siloam given in the Gospel. That interpretation is of Siloam is “sent.” The blessed Theophylact describes the pool of Siloam as a figure of Christ in the following manner: “Just as Christ is the spiritual rock, so He is the spiritual Siloam.” Our Lord continually declares Himself to be this spiritual Siloam in the Gospels by saying, “The Father has sent Me.” (Matthew 10:40, Mark 9:37, Luke 10:16, John 5:36-37, etc.)

While light is being given to this man by the Light of the world, our Lord Jesus Christ, the Pharisees show their own blindness and the darkness in which they live by attacking this miracle of Christ. They accuse Jesus of being a great sinner for healing this man on the Sabbath. They accuse the man of lying about his blindness.

If we look at the world around us, we can see the truth of the words of Saint Nikolaj. The words of the Lord, “for without me you can do nothing,” (John 15:5) are confirmed by these difficulties that we see around us, as the world around us tries to live without Christ. It is only through our actions as followers of Christ that we make Christ real in this world. When we bear witness to Him, we bring the restorative action of the Word in to the world.