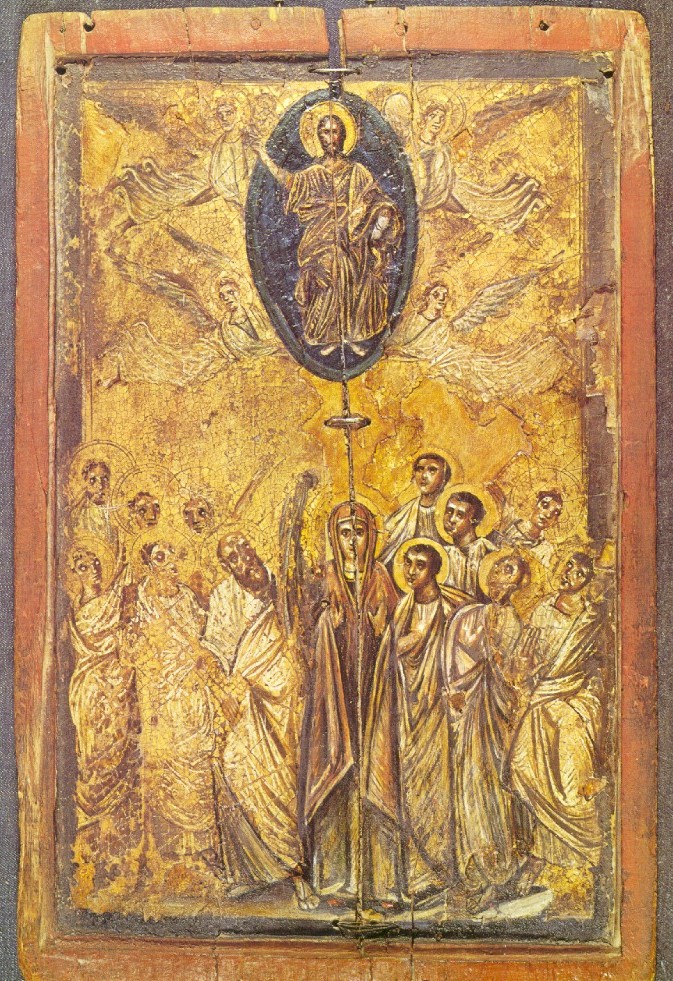 The Ascension. 7th century icon from the Monastery of Mt Sinai.

For the last time Jesus blessed the group of the faithful. Then they saw Him soar above the earth, rising by His own power, From the Mount of Olives, He saw, round about, the places which He sojourned while on earth, from birth to death, which had been sanctified by his presence; the pale brown desert of Judea the River Jordan; Mount Calvary; the plains of Bethlehem.

The Apostles had forgotten everything about them. Straining their eyes, they continued to seek out a gleam of His presence. They would have followed Him anywhere He went on earth; they would have cast themselves into the depths of the sea and perished with Him in the waters, but on this aerial path they could not follow Him. Speechless and surprised with admiration, they watched the Divine Master mount higher and higher to heaven till finally He disappeared in a cloud. While they were gazing up to heaven, two men stood by them in white garments, and said to them: “Men of Galilee, why do you stand looking up into Heaven? This Jesus who has been taken up from you into Heaven, shall come in the same way as you have seen Him going up to Heaven.”

Having prayed in silence, the Apostles returned to Jerusalem, glowing with melancholy joy. They were alone now, alone against the enemy called the world. But heaven is not cut off from the earth as before the coming of Christ; the mystic ladder of Jacob is no longer a lonely man’s dream, but is set up on the earth, on this earth which we tread, and above there is an Intercessor who does not forget those destined to eternal life. The Apostles returned to Jerusalem with the words of Our Blessed Lord ringing in their minds: “I will not leave you alone.”

The departure of Our Blessed Lord was sad, but what joy took place in heaven when He entered! All the angels of the heavenly choirs came out to meet Him. In one voice they cried out in the words of David: “Lift your heads, O Gates, and be lifted up, O Ancient doors, that the King of glory may come in!” Jesus mounted higher and higher above all the choirs of angels, till He came and sat at the right hand of God the Father Almighty. What a beautiful picture of imperishable peace is presented to us as Christ sits at the right hand of God! The throne of Jesus is in heaven where the gates stand open day and night — open, because He has prepared a place for us.

All the beauty we have on earth is just a reflection of heaven. Think of the fairest scenes you have ever seen on earth; of rolling landscapes, of calm lakes and of winding streams, of fragrant meadows and of attractive gardens. Beautiful are the scenes of earth: yet this earth compared to heaven is a prison and a place of probation. No wonder people will cry out, “If our prison is so beautiful, what must heaven our palace be like!” All the joys and beauties of earth would blush in shame if they were put side by side with the joys and beauties of heaven.

Jesus ascended into heaven, and ever since that day we grew homesick for our heavenly home. With heaven as our goal, no trials on earth should over-shadow the vision of our future home. Like Columbus who forgot the trials and hardships of the voyage on his journey to a new land, so we should forget them on our journey to heaven. What matters how the winds of trials may blow upon us. All the earth’s frosts and snows should not cool our heart’s desire for heaven. In all trials may we look up to heaven where the Divine Master ascended for there, through His Ascension, He has prepared a place for us. “If it were not so,” said He, ‘‘I would have told you.”