The Assumption of our Lord

The Assumption of our Lord 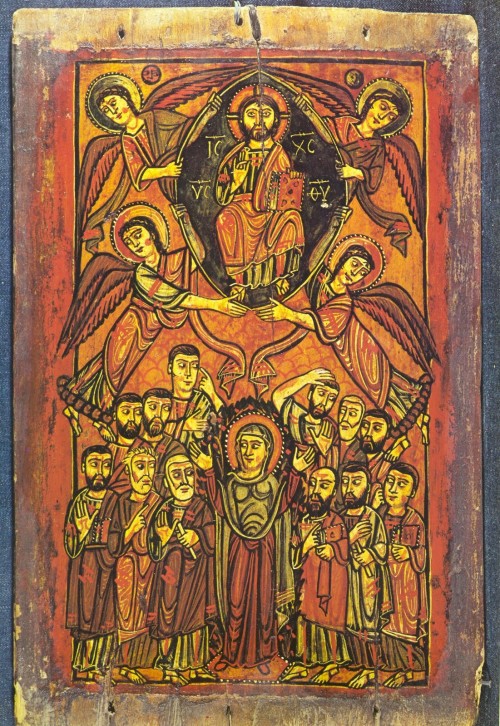 On the Thursday of the sixth week from Pascha, we celebrate the Assumption of our Lord and God and Saviour Jesus Christ.

When he was with his Disciples before his passion, he promised them the coming of the all-holy Spirit, saying, ‘It is right that I go away. For if I do not go away, the Paraclete will not come’. And again, ‘When he comes, he will teach you all truth. Therefore, after rising from the dead, he appeared to them for forty days, not the whole time, but at intervals, eating and drinking with them, proving the resurrection more surely. Finally, after promising many things about the kingdom of God, he ordered them not to leave Jerusalem, but to wait there to receive the coming of the all-holy Spirit, and they would also be baptised through him. For they had formerly only been baptised in water by John (though later Epiphanios of Cyprus recounted that John the Theologian baptised the Mother of God, while Peter and he baptised the rest of the Apostles). He ordered them to remain in Jerusalem so that the first proclamation of the Gospel might be confirmed there, lest, by leaving for foreign places, they might be easily misrepresented. And because it was necessary, as it is for soldiers, for them to be armed with the weapons of the Spirit and so go out to battle with the enemies of Christ.

When the moment came for the assumption, he led them out to the Mount of Olives (so called because it was planted with many olive trees). He talked with them of the preaching to the ends of the earth and also of his perpetual kingdom that was to come, and when he saw that they were about to ask him what was fitting, his most pure Mother being present also, he brought Angels to show them his ascent to heaven. And indeed, as the watched, he was lifted up from among them and a cloud received him. And so, escorted by the Angels, who exhorted one another to raise the doors of heaven and were amazed at scarlet of his flesh from his blood, he ascended and took his seat at the right hand of the Father, making his flesh divine and, I dare to say, making it equal to God. Through it we have been changed, now that the ancient enmity has been abolished. However, Angels appeared to the Apostles, in the form of men, and said, ‘Men of Galilee, why do you stand amazed, straining your gaze to heaven? The one whom you see in flesh, God Jesus, will come like this again in flesh. But not as before, in poverty and unknown, but with great glory, as you now see him, escorted by Angels’.

Then the Apostles, tired by gazing up, returned from the Mount of Olives, which is very near Jerusalem, about two thousand four hundred steps, for this is a Sabbath day’s journey. For so it was laid down by Moses as lawful to walk for this distance on Sabbath. Because the Tent of Witness was this number of steps distant from the Jewish camp. So it was possible for worshippers to go this far on Sabbath and not to walk further. And so it called a Sabbath day’s journey. Some have though because of this that Christ’s Assumption took place of Sabbath, which is incredible.