Half Million Greeks Were Massacred In Ottoman Turkey

Half Million Greeks Were Massacred In Ottoman Turkey 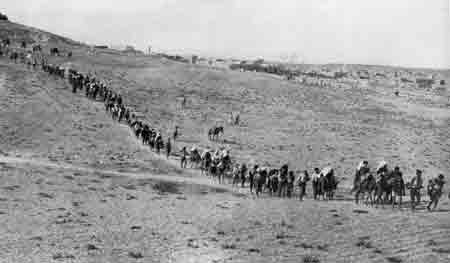 The first wave of repression against Greeks in the Ottoman Empire  began along with the genocide of Armenians and Assyrians at the  outbreak of World War II.

Mass deportations and killings of Greeks stated in 1916. Turkish  authorities did not even conceal that the violent massacres of the Greek population were plotted under the same scenario as was the Armenian Genocide.

After the end of the 1919-22 Greco-Turkish War most of the Greeks migrated or were transferred to Greece under the terms of the 1923  population exchange between Greece and Turkey.

In September, 1922, after the Turkish forces of Mustafa Kemal defeated  a Greek army that had recklessly occupied the Anatolian city of Smyrna, members of Smyrna’s Greek, Armenian, and expatriate communities were  killed, raped, and robbed.

“Turkey has been purified from traitors and alien and will hence belong to Turks,” said Kemal.

According to various sources, about 500 000 Greeks were assassinated during this period. Some of the survivors and expelled, especially those in Eastern provinces, took refuge in the neighbouring Russian Empire.

Recall, that on March 11, 2010 the Swedish Parliament passed a  resolution recognizing Armenian, Greek and Assyrian massacres by the Ottoman Turkey thus becoming the first country to recognize the genocide of Pontic Greeks.