St. Helen, Mother of Emperor Constantine, Equal of the Apostles

St. Helen, Mother of Emperor Constantine, Equal of the Apostles 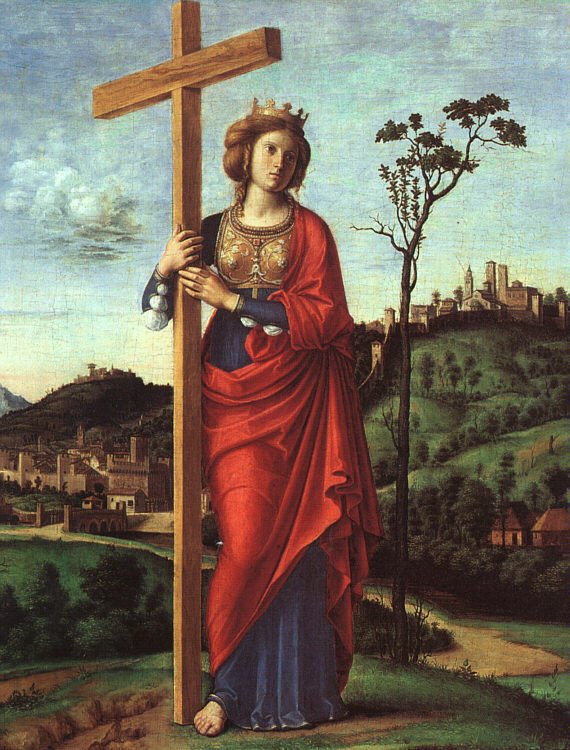 St. Helen was the mother of St. Constantine the Great, and was born at Drepanum (Helenopolis) in Asia Minor to parents of humble means. She married Constantius Chlorus, and their son Constantine was born in 274. Constantius divorced her in 294 in order to further his political ambitions by marrying a woman of noble rank. After he became emperor, Constantine showed his mother great honor and respect, granting her the imperial title “Augusta.”

After St. Constantine became the sole ruler of the Western Roman Empire, he issued the Edict of Milan in 313 which guaranteed religious tolerance for Christians. St. Helen, who was a Christian, may have influenced him in this decision. In 323, when he became the sole ruler of the entire Roman Empire, he extended the provisions of the Edict of Milan to the Eastern half of the Empire. After three hundred years of persecution, Christians could finally practice their faith without fear.

The emperor deeply revered the victory-bearing Sign of the Cross of the Lord, and wanted to find the actual Cross upon which our Lord Jesus Christ was crucified. He sent his mother, Helen, to Jerusalem, providing her with a letter to St. Macarius, Patriarch of Jerusalem.

Although St. Helen was already in her declining years, she set about completing the task with enthusiasm. Searching for the Life-Creating Cross, she questioned both Christians and Jews, but her search remained unsuccessful. However, in 326, she was directed to an elderly Hebrew named Jude who stated that the Cross was buried at the Temple of Venus. St. Helen ordered that the pagan temple be demolished. After praying, the ground began to be excavated. Soon, the Tomb of the Lord was uncovered. Not far from it were three crosses, a board with the inscription ordered by Pilate, and four nails which had pierced the Lord’s Body.

In order to determine the cross on which the Savior had been crucified, St. Macarius alternately touched the crosses to a corpse. When the dead man was touched by the True Cross of the Lord, the body came to life. Having beheld the raising of the dead, everyone was convinced that the Life-Creating Cross was found.

During the discovery of the Life-Creating Cross, another miracle took place – a grievously sick woman, beneath the shadow of the Holy Cross, was healed instantly. Elder Jude and other Jews came to believe in Christ and accepted Holy Baptism. Jude received the name Cyriacus and afterwards was consecrated Bishop of Jerusalem.

Christians came in huge throngs to venerate the Holy Cross, beseeching St. Macarius to elevate the Cross, so that even those far off might reverently contemplate it. The Patriarch and other spiritual leaders raised up the Holy Cross, and the people, saying “Lord have mercy,” reverently prostrated themselves before the Venerable Wood.

While in Jerusalem, St. Helen performed a variety of good works, including giving money to the poor. She also ordered that all places connected with the earthly life of the Lord and His All-Pure Mother be freed of all traces of paganism, and directed that churches be built at each of these places. St. Helen gave the Life-Creating Cross to the Patriarch for safe-keeping, and took part of the wood and nails back to Constantinople.

St. Helen continued to journey to the holy places connected with the earthly life of the Savior, building more than eighty churches – at Bethlehem at the birthplace of Christ; on the Mount of Olives where the Lord ascended to Heaven; and at Gethsemane where the Savior prayed before His sufferings and where the Mother of God was buried.

Emperor Constantine gave orders to build at Jerusalem a majestic and spacious church in honor of the Resurrection of Christ, also including under its roof the Life-Giving Tomb of the Lord and Golgotha. The temple was constructed in about ten years.

St. Helen did not survive to see the dedication of this temple. She entered into the Eternal Kingdom in 327. However, the church was consecrated on September 13, 335. On the following day, September 14, the festal celebration of the Exaltation of the Venerable and Life-Creating Cross was established.

The Orthodox Church commemorates the Uncovering of the Precious Cross and the Precious Nails by the Holy Empress Helen on March 6.

Because of her great service to the Church and her efforts in finding the Life-Creating Cross, Empress Helen is called “the Equal of the Apostles.”

Your servant Constantine, O Lord and only Lover of Man,
Beheld the figure of the Cross in the Heavens,
And like Paul, not having received his call from men,
But as an Apostle among rulers set by Your hand over the royal city,
He preserved lasting peace through the prayers of the Theotokos.

With his mother Helen, Constantine today brings to light the precious Cross: The shame of unbelievers,
The weapon of Orthodox Christians against their enemies,
For it is manifest for us as a great and fearful sign in struggle!