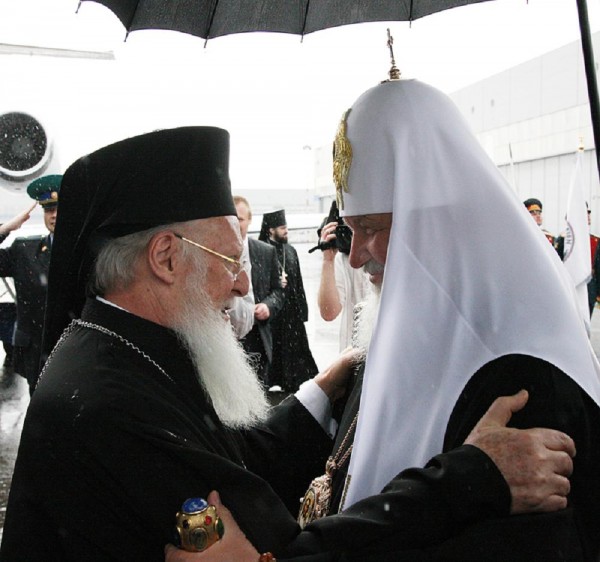 The official visit to the Patriarchate of Moscow and all the Russias by Ecumenical Patriarch Bartholomew Archontonis of Constantinople, traditionally, the first in honour amongst the Orthodox episcopate, will strengthen intra-Orthodox cooperation and, perhaps, advance the cause of a long-awaited Pan-Orthodox Synod, according to our source in the Moscow Patriarchate. On Saturday, the head of the Constantinopolitan Patriarchate will arrive in Moscow at the invitation of Patriarch Kirill Gundyaev of Moscow and all the Russias, and will spend more than a week in Russia. He will visit the Holy Trinity-St Sergius Lavra, which is considered the spiritual centre of Russian Orthodoxy, Transfiguration Monastery in Valaam monastery, which is often called a “Northern Athos”, and religious sites in St Petersburg. 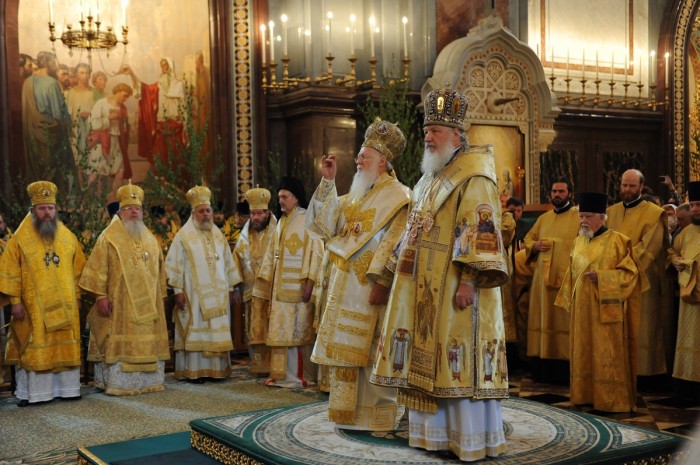 “This is not the first visit of Patriarch Bartholomew to our Church in Russia. His first official visit as Ecumenical Patriarch occurred in 1993, it was lengthy and involved visits to Moscow, the Holy Trinity-St Sergius Lavra, and St Petersburg. However, much has changed in the life of our Church and country over the past 17 years”, said Archpriest Nikolai Balashov, the deputy chairman of the Division of External Church Relations of the Moscow Patriarchate, an expert in the field of intra-Orthodox relations, on the eve of Bartholomew’s visit. In his view, it will be interesting for the EP delegation to become familiar with the monastic life in the MP today, especially the restored monastery on Valaam. It will provide our distinguished guests with a “to have a special opportunity during his stay in Russia, to engage not only in formal meetings and negotiations, but also in quiet and focused prayer”. Fr Nikolai went on to say that Patriarch Bartholomew and Patriarch Kirill “have a long-standing friendship”. While still young bishops, they often cooperated in solving problems that confronted former First Hierarchs of Constantinople and Moscow such as Patriarchs Dimitrios Papadopoulos, Pimen Izvekov, and Aleksei Rediger. In July 2009, the newly-elected Patriarch Kirill, following established Orthodox custom, paid first official visit to Patriarch Bartholomew. This meeting, according to the parties involved, opened a new page in relations between the two Local Churches. Fr Nikolai said, “Patriarch Kirill would like to recreate and deepen the atmosphere of fraternal cooperation and mutual understanding that prevailed during his first official visit to Constantinople  in 2009. 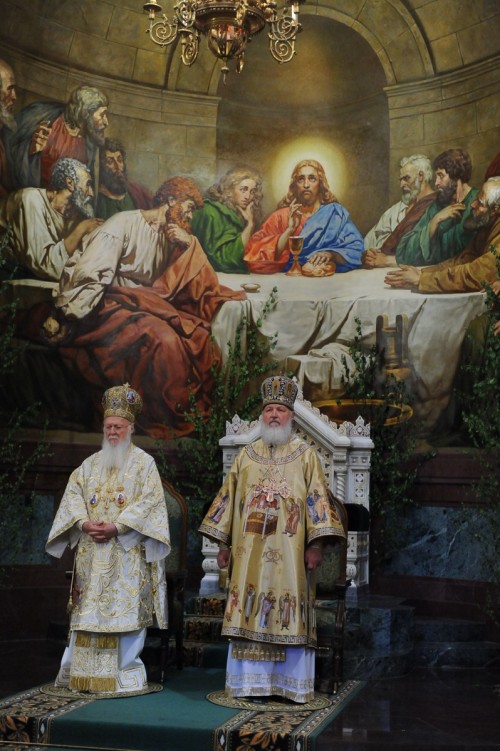 Fr Nikolai continued, “The Patriarch of Constantinople is the first of honour in the Orthodox world, whilst the Patriarch of Moscow heads the world’s largest Orthodox Church. The level of mutual understanding, confidence, and cooperation between these two men largely determines the larger issue of pan-Orthodox cooperation, and, in particular, the process of preparing any Pan-Orthodox Council”. He said that many had spoken of the need to undertake such a council “since the first decades of the 20th century”. Preparations for such a conclave began in the 1960s. At that time, Metropolitan Nikodim Rotov, who was then the head of the DECR, led the MP delegation to the Pan-Orthodox meetings convened to prepare for the council. Fr Nikolai said, “In the 1990s, the process of preparation for such a council, which was difficult enough previously (given the differences in the views of the Local Churches on various issues), stalled over the problem caused by the EP’s establishment of a parallel diocesan structure in Estonia, alongside that of the MP”. He said that it was only possible to clear this problem in the last year of Patriarch Aleksei’s life, with the active participation of the current Patriarch Kirill, who then headed the DECR. During the visit of Patriarch Aleksei to Istanbul in 2008 for a summit meeting of all the First Hierarchs and representatives of the Local Orthodox Churches, it was decided that, henceforth, Pan-Orthodox Pre-Conciliar Consultations would involve only autocephalous (fully independent and self-governing) Local Churches. Fr Nikolai said, “Thus, the problem with the status of the Orthodox Church in Estonia was withdrawn from the context of the Pre-Conciliar Consultations, so that we could continue a dialogue on the important issues of our time that require a collective response from the Orthodox Church as a whole”.

From the Programme of the Visit

On the Trinity feastday, which this year falls on Sunday 23 May, Patriarch Bartholomew shall serve liturgy at the Holy Trinity-St Sergius Lavra, the most renowned monastery in Russia, which was founded by St Sergius of Radonezh in Sergiev Posad near Moscow. Patriarchs Bartholomew and Kirill will concelebrate in the Cathedral of the Assumption at the Lavra. The next day, on 24 May, the two patriarchs will concelebrate liturgy at the Cathedral of Christ the Saviour in Moscow. There are several festivities marked on this date, the Day the Holy Spirit, which is the day after Pentecost, the commemoration of the Enlighteners of the Slavs, the brothers Ss Kirill and Mefody, which is traditionally combined with the celebration of the Days of Slavic Written Language and Culture, and the name day of Patriarch Kirill. After completing a festal Divine Liturgy, the patriarchs will attend the opening ceremony of the Days of Slavonic Literature and Culture. In the evening, the EP delegation is scheduled to attend a concert at the State Kremlin Palace. On 25 May, Patriarch Bartholomew will venerate the relics held at the Assumption Cathedral in the Kremlin. In the afternoon, Patriarch Kirill and the EP delegation shall leave for the patriarch’s residence outside Moscow in Peredelkino. The next day, 26 May, Patriarch Bartholomew will meet with Mayor Yuri Luzhkov of Moscow, and with professors and graduate students from throughout the Church, speaking on Ss Kirill and Mefody. Later on in the day, the visitors will venerate relics in Moscow churches and monasteries, and they shall visit the St Dmitri Nursing School. In the evening, the EP delegation, which mainly comprises clerics of Greek origin, will visit the Greek Ambassador to Russia, Michalis Spinellis.

On the morning of 27 May, the EP delegation will meet with the Ambassador of Turkey in Russia, Halil Akıncı. Then, Patriarch Bartholomew’s entourage will depart for Transfiguration Monastery in Valaam, where he will stay until the morning of 29 May. At Valaam, the delegation will be the guests of the abbot of the monastery, Bishop Pankraty Zherdev. Patriarch Bartholomew shall arrive in Kronshtadt on 29 May, where he shall inspect the restoration work being done on the Naval Cathedral. Then, the EP delegation will visit the Hermitage, along with churches and monasteries in St Petersburg. That evening, the Metropolia of St Petersburg will hold a reception in honour of the guests from Istanbul. On the feastday of All Saints, 30 May, Patriarchs Kirill and Bartholomew will serve Divine Liturgy together at St Isaac Cathedral, and the members of the MP Holy Synod will concelebrate with them. Following this, Patriarch Bartholomew will examine the restored Holy Synod building. That evening, a reception in the honour of the EP delegation shall be held at the Catherine Palace in Tsarskoe Selo. Patriarch Bartholomew and his delegation will leave Russia and return to Istanbul on 31 May. Accompanying Patriarch Bartholomew on this trip to Russia are Metropolitans Michael Staikos of Vienna and Austria/Hungary, Irinaios Ioannidis of Myriophyton and Peristasis, Emmanuel Adamakis of Paris and all France, Secretary General of the Holy Synod of the Patriarchate of Constantinople, and Archimandrite Elpidofor, amongst others.