The Sunday after Pentecost.

The Sunday after Pentecost. 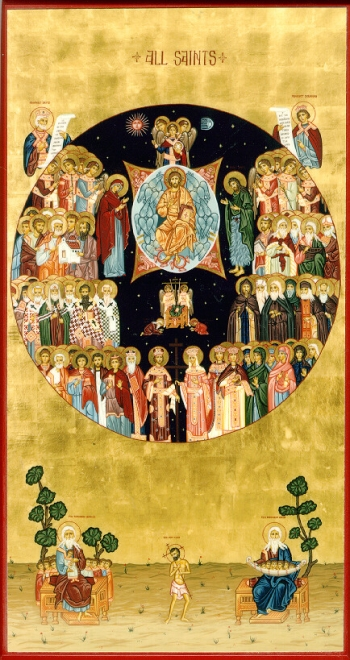 On this day, the Sunday after Pentecost, we celebrate the feast of all the Saints from throughout the inhabited world, in Asia, Libya and Europe, in North and South.

I sing the praise of each friend of my Lord,

If any would, let them now list them all.
Our most godlike Fathers decreed that we should celebrate the present feast after the descent of the All-holy Spirit, as showing in a certain way that the coming of the All-holy Spirit acted through the Apostles like this: sanctifying and making wise human beings taken from our mortal clay and, for the completion of that fallen angelic order, restoring them and through Christ sending them to God, some by the witness of martyrdom and blood, others by their virtuous conduct and way of life; and things beyond nature are achieved. For the Spirit descends in the form of fire, whose natural momentum is upwards; while dust, whose natural momentum is downwards, ascends on high, that dust which forms our mortal clay, the flesh added to and made divine by God the Word, which a short time before, had been exalted and taken its seat at the right hand of the Father’s glory. But he now also draws all those who wish, according to the promise, just as God the Word had manifested the works of reconciliation and what was the end, most suitable to its purpose, of his coming to us through flesh and of his dispensation, namely that he brings those who were rejected before to union and friendship with God — human nature offering to God the ungrateful people from the nations like first fruits —those who were outstandingly well-pleasing to him. This is one reason that we celebrate the feast of All Saints.

A second reason is because, though many people have been well-pleasing to God, they were through outstanding virtue unknown to humanity by name, or for some human reason or other, but nevertheless have great glory in God’s sight. Or again, because there are many who have lived following Christ in India, Egypt, Arabia. Mesopotamia and Phrygia and in the lands beyond the Black Sea, even as far as the British Isles themselves; in short, in both East and West, but it was not easy to honour them all properly because of their vast numbers, in the way that ecclesiastical custom has been received. And therefore, so that we may attract the help of them all, wherever on earth they were well-pleasing to God, and generally for those who would later become Saints, the most godly Fathers ordained that we should celebrate the feast of All Saints, honouring the earlier and later ones, the unknown and the known — all those in whom the Holy Spirit has dwelt he has made holy.
A third reason is this. It was necessary for the Saints who are celebrated individually day by day to be gathered together on one day, in order to demonstrate that, as they struggled for the one Christ and all ran the race in the same stadium of virtue, so they were all fittingly crowned as servants of one God and sustained the Church, having filled the world on high. They stir us also to accomplish the same struggle in its different and many forms, to the degree of power that each of us has to press onwards with all eagerness.
For all these Saints from every age the revered and wise Emperor Leo erected and vast and very beautiful church. This is very near the church of the holy Apostles, within the city of Constantine. He built it originally, it is said, for his first wife Theophano, who was outstandingly well-pleasing to God, which was indeed a marvel in the midst of turmoil and in royal palaces. When he informed the Church of his idea, he did not succeed in making it agree with his wishes.
The most wise Emperor, with the approval of the whole Church, dedicated to all the Saints everywhere in the world the building that had been erected, observing that ‘Since Theophano is a Saint, let her be numbered with the rest. ‘
Note that we are celebrating everything that the Holy Spirit, in giving good things, has made holy. I mean the highest and sanctifying Minds, that is to say the Nine Orders; the Ancestors and Patriarchs; the Prophets and sacred Apostles; the Martyrs and Hierarchs; the Priest Martyrs and Ascetic Martyrs; the Ascetics and the Just and all the choirs of holy women and all the other anonymous Saints, with them let there be all who will come afterwards. But before all, in all and with all, the Saint of Saints, the most holy and quite incomparably mightier than the angelic Orders, our Lady and Sovereign, Mary, Ever-Virgin.

At the prayers of your all-pure Mother, Christ God, and of all your Saints from every age, have mercy and save us, for you alone are good and love mankind. Amen.