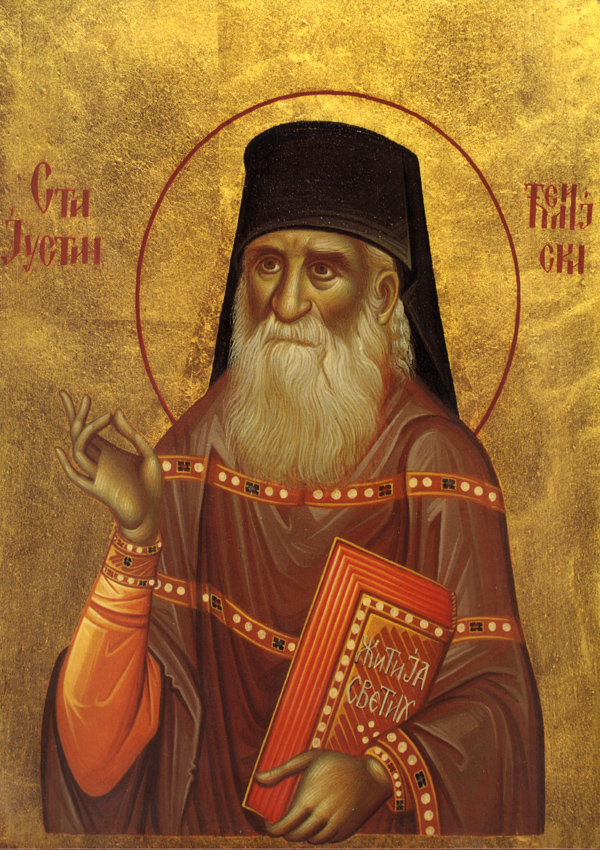 In 1952 there occurred a great miracle in the bakery of Chelije Monastery. In the monastery there were forty sisters, and Mother Nina was assigned to the kitchen. Having prepared bread for supper, she realized that there remained only one cup of flour. As she lamented this problem to the other sisters during dinner, Fr. Justin said: “Pray to Godthe Lord will take care of us!” Early the next morning, as Mother Nina entered the bakery, she found two large canisters of flour. Fr. Justin, Mother Sarah and all the other sisters witnessed this miracle, and all together gave thanks unto God.

The Year 1953
Stojka Jankovich from the village of Leskovac, in the vicinity of the city of Valjevo, had been ill for twelve years from demonic possession. She frequently saw demons, which beat, tortured and wounded her.
When her family censed the house, she saw the demons fleeing from the incense. She went frequently to Fr. Justin for Holy Confession and Communion, and was eventually healed. Later she accepted the mo-nastic vocation, and is now Sister Tatijana.

The Year 1959
The daughter of one Nicholas, from Strmne Gore near Lelich, was ill. For three years she lay immobile in her bed. Once, they took her by car to the monastery and, using a blanket, carried her into church. Fr. Justin read a prayer service over her. After the prayer service she was able to sit up, and after three years she was able to walk. As she had the first time, she again came to the monastery by car and was carried into church. After the prayer service, she walked back to the car by herself. The engine, however, would not start. The men began to push the car, but all was in vain. But when she got out of the car, the motor did start; however, as soon as she entered the car again, the motor stopped. Then she said, “I’ll walk up the hill” (there are a number of hills around the monastery). She was accompanied by a small child. Taking the child by the hand, she proceeded to walk up the highest of the hills.

The Year 1963
On the Feast of the Transfiguration, Fr. Justin was serving the Di-vine Liturgy. The church was full and all partook of Holy Communion. Present among the people was a Muslim who was in the employment of a construction company (“Zhegrap”) that was working on the railway from Belgrade to Bar (a coastal city in Montenegro). His name was Ismet, and until then Fr. Justin had never met him. When the people came forward for Holy Communion, he went forward with them. When he came before the Holy Chalice, Fr. Justin looked at him and said, “You cannot commune, since you’re not baptized.”

Radisha Miljokovich, a six-year-old boy from the village of Trlicha, in the vicinity of the town of Ub, suffered from fainting spells. Fr. Justin held a prayer service for him, and he was healed.

Slavko Molovich from the village of Pambukovice, in the vicinity of Ub, did not have children. He came to Fr. Justin for a prayer service. He was subsequently blessed with two sons.

Milovan from the village of Stave, in the vicinity of Valjevo, a teacher by profession, was severely sick spiritually. One evening, his mother brought him to Chelije Monastery for Vespers, and they spent the night there. At four in the morning they arose for Matins. Walking to the church with Sister Anisija, at the entrance Milovan became ill and fell unconscious. His mother knew that when this state came upon him, calamity and dangers followed, so she shouted to the sister to flee. At that time, the chapel was being built in the monastery, and twenty workers were present. Every morning, at four a.m., they first went to the church for services and then proceeded to work. Milovan began to throw stones at his mother, forcing her to flee to the building where the workers were staying and preparing to go to church. In front of the building there was a lamp. Throwing stones, Milovan damaged all the doors and walls of the building. He threw stones at it without ceasing, so that it was impossible for anyone to exit. Besides the workers, Frs. Makarije and Mardarije from the Rezhvich Monastery, the construction manager, and some other men were present in the building. The whole time he was throwing stones, Milovan was shrieking, “Black one, white one, yellow one, help! Strike! Rapid fire!”and he continued to heap stones before the door.
Above the monastery was a hill with a road on it. People who were traveling on the road heard what was happening. Their astonished voices could be heard in the monastery: “What’s happening in the monastery? This is something dangerous!”
For two hours, Fr. Mardarije and Fr. Makarije were unable to sub-due Milovan. When at last they caught him, they bound him and took him into the church. In the church they bound his hands and feet and, during the Divine Liturgy, five men guarded him. After the Divine Lit-urgy, Fr. Justin performed the Holy Mystery of Unction over him. For the first half of the service he showed no sign of change. At the halfway point, he said: “Untie my hands, they’re hurting me.” By the end of the service, he had fully recovered. He had breakfast with the tradesmen and returned home with his mother, completely healthy and normal. A few days later, Fr. Justin went to Belgrade. When he returned, Milovan, now completely normal and healthy, approached him with thanks. Thereafter, he and his mother came frequently to the monastery.

In the village of Stubo, in the vicinity of Valjevo, lived three sisters: Milenja, Obrenija and Krynija. All three suffered from neuroses. Milenja was the first to become ill and, after a few years, so did the other two. All three came to the monastery. Fr. Justin read prayers for them, confessed and communed them. All three recovered to full health, and Krynija became the nun Paraskeva.

The Year 1964
A mother from the village of Velika Plane brought her daughter Slavka, who suffered from demonic possession, to the monastery. Slavka was twenty-six years old, and the demon spoke through her. Fr. Justin prayed much for her. On the eve of the Feast of the Holy Archangel Michael, the church was filled with people, and Fr. Justin was reading the Holy Gospel, when the demon spoke through the girl. Fr. Justin stopped and said: “It is not she who is speaking, but the demon in her!” To this the demon replied: “I would enter into you, but I can t.
Slavka was in the monastery for a long time and Fr. Justin read prayers for her every day. Three times he performed the Holy Mystery of Unction over her. During this time she went to Holy Confession and Holy Communion, but her condition did not improve. Fr. Justin said: “I am ceasing my prayers; there is some great unconfessed sin here.” He instructed the sisters that perhaps Slavka did not know what sin encom-passed, and that they should converse with her regarding this.
In conversations with the sisters, Slavka confessed her sin: “My par-ents had myself and my brother. My brother became engaged to a girl named Dushica. She was an only child and worked as a telephone oper-ator, as did my brother. He asked my mother and me to come and see his future wife. The girl was fine and pretty, but she had a clubfoot; this was unacceptable to both of us, and we were against the engagement. My brother called her on the phone while she was at work and canceled the engagement. Later, her fellow workers said that although she had always gone home the same way, on this day she had gone down a road that crossed the railway. From a distance a train was approaching and she began to run. At that moment, an elderly gentleman (who later told of all this) approached her, grabbed her by the hand, and said: “Where are you going, child?” She freed herself from his grasp and at the last moment threw herself in front of the train. In relating this to the sisters, Slavka did not realize that she had committed a sin.
Afterwards, Slavka went to Confession, and sent an appeal to the bishop that a funeral service be held for Dushica. The funeral service was performed at Dushicas grave, and Fr. Justin served forty Divine Liturgies for the departed. When all was completed, Slavka then de-parted for home completely healthy.