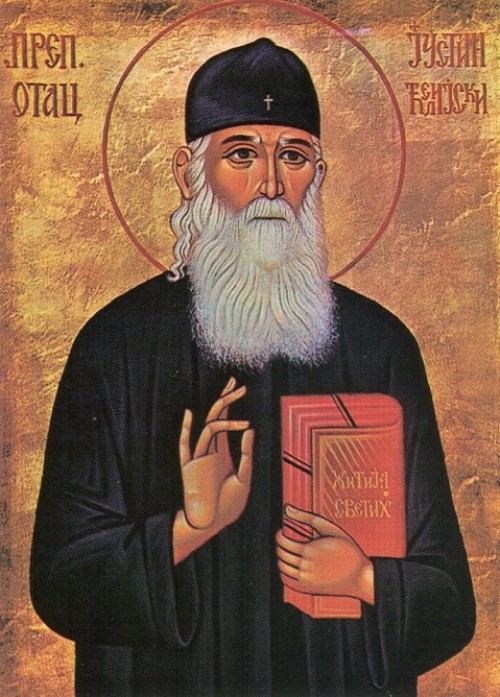 The Year 1972
Z. from Valjevo was very ill for six years. He had a certificate that he was a lunatic. He was brought to Fr. Justin, who read prayers for him. He departed with his health restored. Since that day he comes to the monastery two or three times a year, and performs voluntary labor.

Marija Petrovich from read more… Valjevo gave birth to a baby girl. In the hos-pital, the doctors informed her that the child’s right hand was paralyzed. At once, Marija became an amnesiac, and had no idea who she was. She underwent therapy in Valjevo and Belgrade, but her condition grew no better. During her sickness, she became hostile to those around her, beating people with stones and whatever else she could place her hands on. All fled from her. Once she threw herself into a well fifteen meters deep. She sank, but the water raised her to the surface and, by the will of God, she climbed out of the well by herself and without any injuries. She underwent therapy for another six years, but was finally committed to the mental hospital in Kovin, where she was given the strongest possible drugs. Even these did not help. Her mother heard about Fr. Justin, and she brought some of Marija’s clothes and some sugar to the monastery. Fr. Justin read prayers over the clothes and sugar, and her mother took these items to the hospital. Marija wore the clothes and ate the sugar. She recovered completely, and frequently comes to the monastery.

The Year 1976
Boshko Pashich from Futog, in the vicinity of Novi Sad, was ill for four years. He had frightful visions both while he slept and while he was awake, and therefore could not sleep. Fr. Justin read prayers for him, and he recovered completely.

The Year 1977
One Sunday, Fr. Justin was serving the Divine Liturgy. The church was filled with people, and among them was a Turk by the name of Rasim. Fr. Justin had never seen him before. When Rasim came for-ward to take antidoron, Fr. Justin explained to him: «You can’t receive antidoron, because you’re not baptized.»

The Year 1978
Ranka Begovich, a medical doctor from the village of Brezovice by the town of Ub, was suffering from a spiritual sickness. Fr. Justin often prayed for her and read prayers over her. She recovered completely and is employed in Belgrade as a doctor.

Zhivko and Malisha, stonecutters from the village of Divaca, located in the vicinity of the city of Valjevo, were not pious, and both enjoyed drinking. They often spent days and entire nights in cafes. Their relatives came to Fr. Justin asking for his intercessory prayers for them. His prayers freed them from their affliction. Upon renouncing alcohol, they came to Fr. Justin to express their gratitude. They sincerely repented for the time and money they had wasted in cafes. «Why did we not know to come here [to the monastery] before?» they said. These men became true Christians and often visit the monastery.
It is impossible to mention individually each of the many, many individuals who, thanks to Fr. Justin’s prayers, renounced alcohol. Against every evil in the worlddiscord, malice, broken marriages, children abandoning parents, parents degrading childrenFr. Justin’s prayers restored things to what they should be!

During the time that Fr. Justin was alive on earth, the following event occurred. A woman (Kovachevich), from the village of Lelich, was in the maternity ward of the Valjevo hospital. After giving birth, she suffered a nervous breakdown and was transferred to the psychiatric ward. When her husband arrived with their family, they were shocked by the turn of events. Obtaining her discharge from the hospital, they immediately brought her to Chelije, to Fr. Justin, that he might read prayers over her. At the conclusion of the prayers, she came to herself and felt better. She has since recovered both physically and mentally.

The Year 1979
On St. Sava’s Day there were many people in church. There were many childrenthirty-five of them recited short speeches. Fr. Justin gave the sermon and said: «Today we have gathered to celebrate St. Sava; may we all see one another in heavenall of us gathered around St. Sava! May we all celebrate him there, in heaven!» We all heard these words and, though their effect was chilling upon each of us, we passed over them in silence. When Fr. Justin fell asleep in the Lord, we remembered his words, and concluded that Fr. Justin knew he was going to die, and that this had been his last celebration of St. Sava here on earth. Many individuals said to the sisters that what Fr. Justin said on St. Sava’s DayMay we all meet in heaven!was a sign that he knew he was to die. In previous sermons he had always said: «Thanks be to God that many of you are here in church and, especially, many children. May we together celebrate St. Sava here on earth for many years!»
On the third day after Fr. Justin’s death, the first miracle occurred. We were all gathered around Fr. Justin’s coffin, reading telegrams of condolence. All the sisters were overcome with weeping and sobbing when, suddenly, like a wave, a strong, pleasant fragrance manifested it-self. We were all surprised and, simultaneously, we exhaled and ex-claimed: «A fragrance! Do you smell it?» A little later, the same fragrance was noticed again.
On the day of Fr. Justin’s funeral, Bishop Jovan of Shabac-Valjevo entered the church, venerated Fr. Justin, knelt down, and placed his head on the stand on which the coffin rested. For a long time he knelt and wept. When he arose, he said: «Fr. Justin is sleeping. He has not died.» Father’s face was radiant, even though he had died four days earlier.
On the day of Fr. Justin’s burial, Bishop Domentijan related in his sermon how Fr. Justin, upon meeting a person (previously unknown to Fr. Justin), had addressed that person by name. That individual had later related the story to Bishop Domentijan.

M. P. from Belgrade was seriously ill. He had an ulcer on the esophagus and was greatly anemic. He was treated for a number of years, and was finally directed to a hospital for an operation. At Fr. Justin’s fortieth-day memorial service, he prayed at Fr. Justin’s grave, and felt as though something was turning in his stomach. The next day he went to the hospital, where they performed the preparations for an operation (x-rays and analysis). However, a great miracle had occurred: the x-rays could not even find a scar, and all other analyses and examinations could not reveal any illness. The specialist-surgeons, all capable doctors, were amazed by the comparison of the old and new x-rays. Since then, M. has enjoyed perfect health.