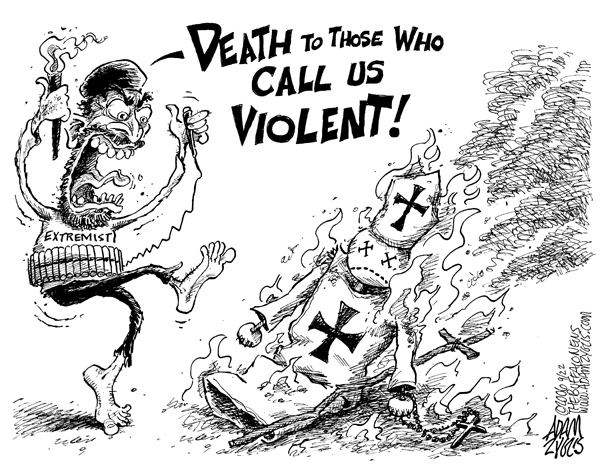 For all the attention Turkey has gotten lately, very few Americans are aware that the Roman Catholic bishop serving as apostolic vicar of Anatolia was stabbed to death and decapitated last month by an assailant shouting, “Allahu Akbar! I have killed the great Satan!”

There are fewer than 60 Catholic priests in all of Turkey, and yet Bishop Luigi Padovese was the fifth of them to be shot or stabbed in the last four years, starting with the murder of Fr. Andrea Santoro in 2006, also by an assailant shouting, “Allahu Akbar!” (An Armenian journalist and three Protestants working at a Christian publishing house — one of them German, the other two Turkish converts — were also killed during this period.)

What’s going on? Why has traditionally secularist Turkey, with its minuscule Christian community (less than 0.2 percent of the population), lately become nearly as dangerous for Christians as neighboring Iraq? And why has this disturbing pattern of events so far escaped notice in the West?

In a nutshell, all these violent acts reflect a popular culture increasingly shaped by Turkish media accounts deliberately promoting hatred of Christians and Jews.

As it happens, Bishop Padovese was murdered on the same day (June 3) that the Wall Street Journal published an eye-opening report on how Turkey’s press and film industry have increasingly blurred the distinction between fact and fantasy, especially since the Islamist Justice and Development Party (AKP) took power in 2002.

“To follow Turkish discourse in recent years has been to follow a national decline into madness.” That’s how Robert L. Pollock, editorial-features editor of the Journal, summed up the trajectory of the daily fare that shapes Turks’ attitudes toward the outside world — and toward non-Muslims in their midst. Indeed, much of what passes for fact in Turkish public discourse would be comical if not for the deadly consequences.

Take, for instance, the wildly popular 2006 film Valley of the Wolves, later serialized for television. An earlier Journal piece summing up the plot as “a cross between American Psycho in uniform and the Protocols of the Elders of Zion” hardly does it justice. The plot turns on blood-crazed American soldiers committing war crimes for fun and profit in Iraq. These include the harvesting of body parts from murdered Iraqi civilians on an industrial scale (overseen by a Jewish doctor, of course) for shipment in crates clearly labeled New York and Tel Aviv.

Valley of the Wolves is the most expensive and most commercially successful Turkish feature film ever. Worse yet, it comes with the endorsement of leading AKP figures, such as the speaker of the parliament (“absolutely magnificent”) and the mayor of Istanbul (“a great screenplay”). Mr. Pollock’s judgment? “It is no exaggeration to say that such anti-Semitic fare had not been played to mass audiences in Europe since the Third Reich.”

Unfortunately, this film — with its poisonous blood libel against Christians and Jews — falls well within what is now mainstream Turkish public discourse.

Consider only some of the wilder rumors given credence by the Turkish press — for example, how the United States intends to colonize the Middle East because of an impending asteroid strike on North America, or how the 2004 Asian tsunami was really caused by secret U.S. nuclear testing. The latter claim was so prevalent in the Turkish media that the U.S. ambassador at the time, Eric Edelman, actually organized a conference call with Turkish journalists to refute the calumny.

This is the overall context in which incendiary published accusations are made that Catholic priests, sometimes identified by name, are engaging in proselytism — that is, seeking to convert Muslims, often with cash payments. I happen to know just how implausible these claims are, based on my own experience as a Catholic seminarian living and working in the Middle East a decade ago. I found that pastors of the historic Middle Eastern churches almost always go out of their way to discourage prospective converts, rightly fearing agents provocateurs from the security services or Islamist groups. In the rare case where a conversion does occur, the person is generally baptized outside his home country, in a place where apostasy is not criminalized or barred by powerful social norms, such as preservation of family honor.

What local Christian clergy actually do is to tend shrinking flocks without seeking to add to their numbers. (These little congregations increasingly include migrants like the Filipina nurses and domestic workers who are ubiquitous throughout the Middle East.) Some also provide public goods such as education and health care for Muslims and Christians alike on a non-sectarian basis. Others serve the pastoral needs of pilgrims visiting places (like Turkey) where Christianity once flourished. Nearly all see themselves as silent witnesses for Gospel values in places where prudence now bars the Gospel’s open proclamation.

There are vanishingly few Christians and Jews in Turkey. So the numbers of non-Muslims in the country cannot begin to explain the mounting popular hostility — not simply toward Americans, Europeans, and Israelis, but toward Christians and Jews as such. Turkey’s population (roughly 77 million) is more than 99.8 percent Muslim, with its tiny Jewish and Christian populations (perhaps 25,000 and 150,000, respectively) looking like a rounding error. Yet more than two-thirds of all Turks (68 percent) expressed a negative view of Christians in the 2009 Pew Global Attitudes Survey, as opposed to the results in nearby Muslim-majority states with much larger Christian minorities, like Jordan (44 percent negative) and Egypt (49 percent). Hostility toward Jews, moreover, has spiked recently, with those self-identified as “very unfavorable” jumping from 32 percent in 2004 to 73 percent in 2009.

The short answer to the question why Christians keep getting attacked in Turkey is that ideas have consequences, with bad ones often leading to deadly consequences. In the current issue of Commentary, Michael Rubin offers a masterly step-by-step analysis of the way in which Turkey’s current Islamist rulers have systematically undermined and dismantled Atatürk’s secular legacy and have put in place an embryonic Islamist state. Ideas once expressed on the fringes of Turkish society have now become mainstream and respectable.

It is precisely this darkening climate of public opinion that provides the essential context for the spate of attacks against Catholic priests. Here it’s worth noting that, historically, Catholics were not regarded as enemies of modern Turkey in the way that Greeks and Armenians were. The Holy See was one of the first states to exchange ambassadors with the newly formed Turkish Republic in 1923; and one of its first ambassadors (from 1933 to 1944), still fondly remembered, was Angelo Roncalli, better known today as Blessed John XXIII.

So too is it a fact that Catholic clergy serving in trouble spots like Turkey have sometimes (though not always) enjoyed a certain immunity from violence or arbitrary arrest. That’s because the Vatican is widely perceived as a powerful entity that can command diplomatic and media attention (especially as compared to Christian evangelicals, who lack similar institutional support). That several Catholic priests have now been attacked in Turkey is a troubling new development that may reflect political Islam’s implacable hostility toward Pope Benedict XVI. Recall that what angered Islamists most about Benedict’s 2006 Regensburg lecture was not an injudicious quotation from a 14th-century Byzantine emperor. It was Benedict’s observation that while reason without faith leads to nihilism (Europe’s problem), faith without reason leads to fanaticism and violence (Islam’s problem).

But it’s also a fact that the killing of Catholic clerics in Muslim-majority states tends nowadays in the West to be passed over in silence or treated as business as usual. Imagine for a moment what would happen if — God forbid! — a very senior, foreign-born Muslim cleric were murdered in the U.S. in circumstances amounting to a hate crime. It is not difficult to imagine the likely aftermath: wall-to-wall media coverage, repeated international condemnations, and multiple presidential apologies.

In the case of Bishop Padovese, one close observer makes explicit the connection between pervasive media vilification and violence against Catholic clergy. Fr. Bernardo Cervellera, whose Asia News broke the story of the true facts surrounding the bishop’s murder, maintains that “there’s a campaign against Christian priests in Turkey. The government says it’s not true, the Turks say they don’t believe it, but it’s quite enough to watch television or read the newspapers to realize that indeed it is true.”

These facts — and their necessary implications — are a long way from the Islam-is-a-religion-of-peace happy talk peddled by both the Bush and Obama administrations. Little wonder that there’s practically no understanding in the U.S. that Turkey’s beleaguered religious minorities — and their co-religionists elsewhere in the region — serve as canaries in the coal mine, bellwethers for major policy shifts that our foreign-policy establishment is slow to grasp. Or indeed that the plight of these minorities mirrors, at least roughly, the state of U.S. interests and ideals in the region.

It wasn’t always the case that Americans paid no attention to the plight of Middle Eastern Christians. In the wake of World War I, the New York Times could safely assume a lively interest (and some Biblical literacy) among readers when editorializing in 1922 about the mass expulsion of ethnic Greek Christians from the new Turkish state: “Is this to be the end of the Christian minorities in Asia Minor — that land where, 13 centuries and more before the Turk came to rule, Paul had journeyed as a missionary through its length and breadth, and where the first ‘seven churches that are in Asia’ stood, to which the messages written in the Book of Revelation were sent?”

But that was then; and this is now.