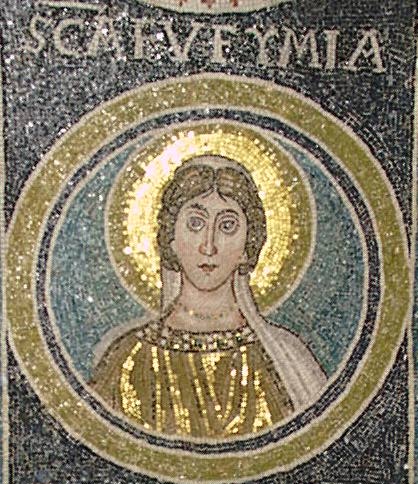 Byzantine mosaic of St. Euphemia of the 6th century. Porec, Basilica of Euphrasius.

Saint Euphemia is commemorated on September 16, the day on which she was martyred. On this day, however, is commemorated the miracle surrounding her honorable relics, which was manifested at the time of the Fourth Ecumenical Council in Chalcedon. This Council was convened during the reign of Emperor Marcian and the Empress Pulcheria in the year 451 A.D., after the death of Emperor Theodosius the Younger. The reason for summoning this Council was the heresy of Dioscorus, the Patriarch of Alexandria and Eutyches, an Archimandrite from Constantinople, who spread the false teaching that in Christ the Lord there were not two natures, divine and human, but only one, a divine nature. At this Council Anatolius, Patriarch of Constantinople, and Juvenal, Patriarch of Jerusalem, played the most prominent roles. Because a conclusion could not be reached through debates and testimonies from either side, Patriarch Anatolius motioned that the Orthodox and the heretics write down their confessions of faith and then place them in the sarcophagus where the relics of St. Euphemia reposed. They all agreed to this. Therefore, the two confessions of faith were written and placed on the bosom of the great female martyr. The sarcophagus was closed, sealed with the emperor’s seal and military guards were appointed. read more… All of them spent three days in prayer and fasting. When they opened the sarcophagus on the fourth day, they saw the Orthodox confession of faith in the right hand of the saint and the heretical confession of faith under her feet. Thus the dispute, through the power of God, was decided in favor of Orthodoxy. During the reign of Emperor Heraclius, the relics of St. Euphemia were translated from Chalcedon to Constantinople to the church dedicated to her near the Hippodrome. The iconoclastic Emperor Leo the Isaurian ordered that these relics be tossed into the sea but, in a miraculous manner, the sarcophagus was translated to the island of Lemnos and placed in the church of the great female martyr Glyceria. Then, during the reign of the Empress Irene, the sarcophagus with the relics of St. Euphemia was again returned to Constantinople to its former place. Blood flowed from these relics from time to time which helped those who were ill or in misery.