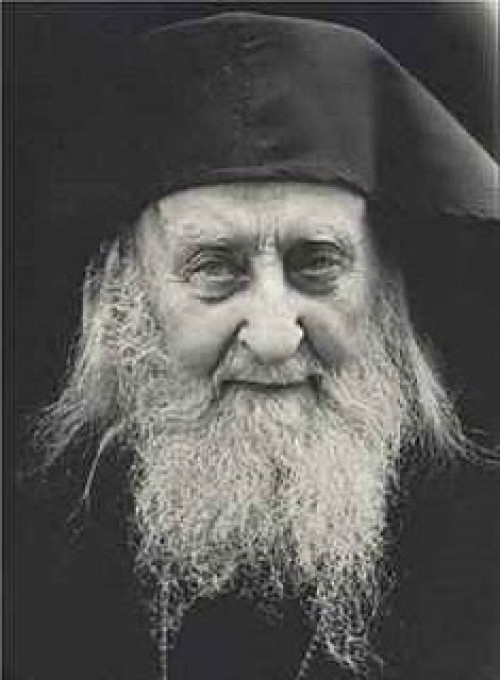 Four days before he died, he closed his eyes and did not want to talk to us anymore. His face was radiant but not sad; full of tension. He had the same expression like when he was ministering the Devine liturgy. He would not open his eyes, or utter any words, but he would lift up his hand and bless us. He was blessing us without words but I knew that he was going away. Before, I used to pray that God should let him leave longer, just as we pray during the liturgy of St. Vasilios: “prolong the time of the old”. However during those days, when I knew he was leaving, I started praying: “My Lord, give your servant a rich welcome into your Kingdom”. I was praying using St Peter’s words, as we read it in his second letter. (2 Peter 11)
Thus I was praying intensely: “Please God give your servant a rich entry into your Kingdom and place him among his Fathers”. Then, I would call the names of all his brothers, ascetics, in Ayio Oros, whom I knew he had connections with, beginning with Saint Silouanos and then all the others.  read more…On the last day, I went to visit him at six in the morning. It was Sunday and I was ministering the morning service, while Father Kyrillos and the other priests would minister the second service. I realized that he was going to leave us that day. I began the service at Ayia Prothesi. At seven o’clock the Hours would start, followed by the Devine Liturgy. I only uttered the prayers of Anaforas, because at our monastery we say these aloud. For the rest of the time, I continued to pray: “Lord give your servant a rich welcome”.
That service was different from all the others. When I called out: “The Holy to the Saints”, father Kyrillos came into the Sanctuary. We looked at each other; he began to cry and I realized that Fr Sofronios was gone. I asked him what time he died and I knew that he passed away during the time I was reading the Gospel. I stepped aside because he wanted to speak to me and he said: Give the Holy Communion to the faithful and then announce that Fr Sofronios has passed away , then minister the first Trisagio; I will also do this during the second service. Thus, I took the Holy Communion myself and then offered it to the faithful. Then I finished the service. I still do not know how I managed this. Afterwards, I went out of the Sanctuary and told those present: “My beloved brothers, our Christ, our Lord, is the wonder of God in all generations of our times, because in His words we find salvation and a solution to every human problem. Now we must do what the Devine Liturgy teaches us: to give thanks, to pray and to plead. Thus, let us thank God because he gave us such a Father , and let’s pray for his soul. “Blessed be our Lord” and thus I began the Trisagio.
We placed his body inside the church because the tomb had not been built yet. We allowed his body to remain uncovered for four days and we were constantly reading the Gospels from the beginning to the end, and then again, as it is customary to do when priests have passed away. We continued with several Liturgies, and he was there in the middle of the church for four days. It felt like Easter! It was such a wonderful and blessed atmosphere! No one came into hysterics, everyone prayed with inspiration.
I have a friend, Archimindrite, who used to spend several weeks at the monastery during the summer, Fr Ierotheos Vlachos, who wrote “A night at the desert of Ayio Oros”. He is now a Bishop of Nafpaktos. He arrived as soon as he learnt that Fr Sofronios was gone. He felt the same veneration and said to me: “If Fr Sofronios is not a Saint, then there are no Saints”.
It so happened that some monks from Ayio Oros were present as well, because they had come to see him but did not see him alive. Fr Tychon from Simonopetra was one of them. Every time Greeks would visit England for medical reasons, they would come to the monastery so that Fr Sofronios would bless them; many had been cured this way. During the third or fourth day of his passing, a family of four arrived at the monastery. They had a child of thirteen. He had a tumor in the brain and his operation was scheduled for the next day.
Fr Tychon said to me: “These people are very upset because they came and did not find Fr Sofronios alive”. Why don’t you read some prayers for the child?”
I said to him: “Let’s go together. You read from the book and we will read some prayers together at the other Chapel. We did just that and at the end Fr Tychon said to me: “You know something? Why don’t you pass the child under Fr Sofronios’ coffin? He will be cured. We are messing about reading prayers”. I answered that we couldn’t do this, because people would say that as soon as he had died we are trying to promote his sanctification. “You do it”, I said. “You are a monk from Ayio Oros. No one will say anything”.
He took the child by the hand and passed him under the coffin. The next day he was operated upon and the doctor found nothing. He closed up the brain and said: “It was a wrong diagnosis. It was probably an inflammation”. A Greek doctor was also accompanying the child and was carrying the x ray documents, which showed the tumor. He said to them: “I am sure you know very well what this ‘wrong diagnosis’ means”.
That child is now 27 years old and in a very good health.