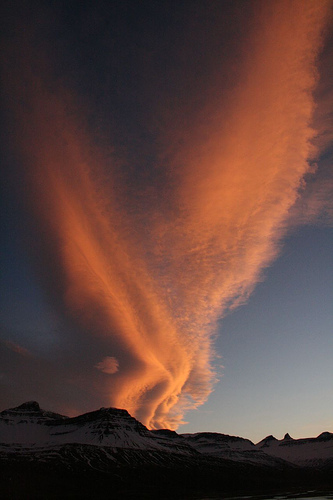 An elder once said that there was this hermit who was living in the deepest desert for many years and had achieved the visionary charisma to such an extent that he was also in company with angels. Then this is what happened:

Two brothers, monks, heard about this hermit and wished to meet him so that they could benefit from his acquaintance.   They abandoned their cells and headed towards the deserted looking for this servant of God, having in their hearts total confidence in him.

They asked him: “Who are you and what do you want?”

“You must tell the elder whom you are going to meet not to forget what I had asked him to do”.

The brothers found the elder, saluted him and falling on their knees they were asking him for some advice which would help them towards their salvation. Indeed, he taught them and they benefited a great deal. They also told him about the man they had seen while they had been on their way to the cave and about his request.

The elder knew for whom they were talking about but pretended he didn’t have a clue. Instead he said: “No other man lives here”. However, the brothers who were continuously bowing in front of him and grasping his legs, made him reveal who it was that they had seen.

The elder lifting them up, said to them: “Only if you give me your word that you will not talk about me as if I am a saint to anyone until I depart for my Lord, I will explain the situation”. They did as he had asked them to and he said:

“The man whom you have seen dressed in white is the Lord’s angel who came to poor little me and said: ‘Please beg the Lord on my behalf so that I may return to my place because the time designated by the Lord has come’. When I asked him what the reason for his penance was, he said: ‘It happened that in a regional town many people had been making the Lord angry with their sins for a long time. He sent me to punish them mercifully. However, when I saw how corrupt they had been, I imposed a heavier penance so that many of them perished. That is the reason why I was sent away from the face of my Lord, Who was the One to authorize this mission’. When I said to him: who am I to intercede to the Lord for an angel, he said: ‘If I didn’t know that the Lord accepts the prayers of his honest servants I would not be coming here to pester you’.

At that very moment I was astonished at the infinite mercy of the Lord and his infinite love for man. He made him worthy of talking to Him and seeing Him. He also designated His angels to serve men and be in contact with them, just like it happened with the blessed servants Zachariah and Kornelios and Prophet Elijah and other saints. I felt admiration with all these and thanked Him for his mercy”.

Shortly after this incident, our blessed father passed away. The brotherhood buried him with honor, chanting hymns and prayers. Let us try to imitate this hermit’s virtues with the power of our Lord Jesus Christ, Who wants everyone to be saved and acknowledge His truth.