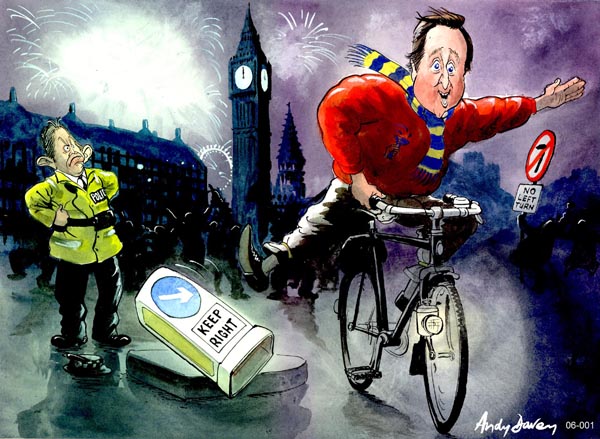 Britain’s Prime Minister, David Cameron, made an incredibly stupid speech in Turkey that displayed his ignorance of international affairs.

Calling Gaza a ‘prison camp’ his comments pointed to Israel as being totally responsible for the restraints and conditions there.

Hamas and other Islamic terror groups that prosper and operate in the Gaza Strip were airbrushed out of his speech. For Cameron, they do not exist. They are, for him, no part of the problem.

Cameron knows that the current accepted legal method of moving goods into Gaza in via the Israeli land route. This is accepted by all rational countries to protect Israel’s security after decades of Hamas terror against Israeli civilians.

Cameron knows that hundreds of tons of aid flow into Gaza on a daily basis.

Yet none of this was mentioned in his speech.

Cameron failed to address the obsessive hatred of Israel that is rampant in the Middle East and has spread, via a biased propaganda campaign, to public opinion that is rooted in his own country of Britain.

Cameron stated that Turkey is a friend of Israel. Not any more it isn’t. Israel trusted Turkey. Israel developed an intimate relationship with that country. It conducted close military exercises with Turkey. Israel supplied Turkey with a lot of advanced military equipment and intelligence information. Then Turkey turned around and bit Israel.

It is no secret in Israel that our military finds itself compromised militarily for being so forthcoming with Turkey during the good old days and now finding itself facing a potential enemy it supplied with excellent military equipment and strategic knowledge.

Turkey has shown it’s true extremist Islamic face in recent months. It has hardened its line on Cypriot occupied land. It has refused to accept its responsibility for the murder of one million Armenians. It is currently occupying Kurdish territory and killing Kurds.

Yet Cameron promised to speed up Turkey’s admission into the EU. Is this what Europe really wants? Not according to the views of countries like France, Germany, and Italy who reject Turkey’s entry into Europe under suspicion of the true nature of that country. They are right to be concerned.

Turkey defied world consensus against Iran by cozying up to Tehran. Erdogan eembarrassed the United States and those nations trying to build sanctions against Iran’s nuclear ambition by forging a nonsensical, non-applicable, agreement between Iran, Turkey, and Brazil.

Under the shadow of Turkey’s growing Islamisation, it’s newly developed friendships with Iran, Syria, Hamas, and even Hizbollah in Lebanon, it’s hateful actions and statements against Israel, and it’s violent history in the region, how could Cameron possibly claim that ‘Turkey can become a great European power’?

What sort of power does Cameron want Turkey to play in Europe? Isn’t Europe Islamic enough already? Does Cameron really want an Islamic Turkey, partnered with Iran, and other Islamic terror regimes, entrenched in the heart of Europe?

Is that the sort of Europe that Cameron visualises as he blames Israel for all the ills of the region centered on Gaza?

David Cameron needs to go back to first grade in international affairs, but not at the British Foreign Office which is brimming with anti-Semitic Arabists, and get himself an education.

Then, maybe, he will be able to give a fair and balanced speech that puts things in proportion, that speaks up for an ally in the region, if Israel is still considered an ally by Britain. The jury is still out of that question..

It would also enable him to criticise his Turkish host, in diplomatic language of course, for the dangerous foreign policies, based on his extremist religious belief, that is preventing his country from being accepted as a European nation.

Britain’s Prime Minister showed his lack of knowledge, lack of diplomacy. Whoever wrote his speech should be sacked, but Cameron himself could have, should have,regulated his words in a sensitive region where important leaders words resonate.

His speech has isolated Israel even further. His speech has encouraged the dangerous players in the region to dig in their heels. They interpret his words as encouraging them in their anti-Israel agenda. Turkey can continue its provocative and violent foreign policy as it has a champion of Britain’s Prime Minister. Hamas can continue its suppression of Gaza. It already receives huge amount of funding from Britain. Now Britain’s prime Minister gave Hamas a free pass, and kicked out at Israel.

Yes, Cameron made an incredibly stupid and dangerous speech in Turkey.