Press enter to begin your search
In EnglishΘεολογία και Ζωή 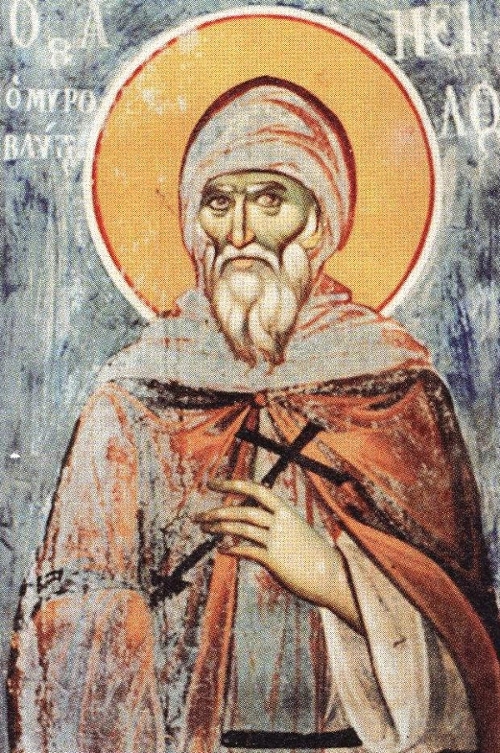 Saint Nilus the Myrrh-gusher. A fresco from the Holy Skete of St. Demetrios, Holy and Great Monastery of Vatopaidi, Holy Mount Athos

Saint Nilus lived in the 16th Century. He was born in a village near Tripolis in the Peloponnisos area in Greece. He became an ascetic on Mount Athos and died on the 12th November 1651. Fragrant myrrh was dripping out from his tomb and for this reason he is called Myrovlitis. read more…
“As we move from 1900 towards the middle of the 8th Century (5.508 years since Adam + 2000 A.C.= 7.508 years) the people of those days will become unrecognizable. When the advent of Antichrist draws near, people’s reasoning will be obscured because of carnal passions while profanity and indecency will prevail. People will become unrecognizable; people’s faces will be disfigured; men will not be distinguishable from women because of their shameless garments and the hair on their heads. Then they will become wild and will resemble the beasts because they will be seduced by Antichrist.
Respect for the parents and elders will be no more; love will perish; the Christians’ shepherds, Archpriests and priests, will be conceited and will no longer recognize the right path from the left.
During those days the customs and the traditions of the Christians and the Church will change. Prudence will be lost and profanity will prevail. Lies and the love of money will reach epidemic proportions. Woe to those who stockpile monies.
Fornication, adultery, homosexuality, thefts and murders will be an everyday occurrence during those days. As a result of the heavy sins and the widespread debauchery, people will be deprived of the grace of the Holy Spirit which they have received during their Baptism, as well as the compunction of their conscience.
The Lord’s Churches will be deprived of devout and pious shepherds. Woe to the Christians who will live those days because they will be faithless. They will have no opportunity to see the light of knowledge from anyone. Then they will leave the world and run to hide inside the holy catacombs in order to find solace for their souls’ tribulations but instead obstacles and hardship will be in their path. All these will take place because Antichrist will rule over everything and will be the leader of all humanity. He will perform imaginary signs and astonishing deeds; He will then dispense crafty wisdom to the wretched man so that he invents ways to speak to one another from one end of the earth to the other, fly in the air like birds and cross the bottom of the sea like fish.
The poor people will do all these and will live in comfort, not knowing that all are delusions by the Antichrist. The Evil one will enable science to achieve such huge imaginary advances so that people will be misled and no longer believe in the existence of the Triune God.
Then the Almighty God, seeing that mankind is heading for its demise, will shorten the days for the sake of those few who will be saved, since the Devil will try if possible to deceive even the chosen ones.
Then suddenly the two-edged sword will appear to destroy the deceiver and his followers…”