St. Alexander of Svir (30 August) and His Monastery in Russia (with many pictures)

St. Alexander of Svir (30 August) and His Monastery in Russia (with many pictures) 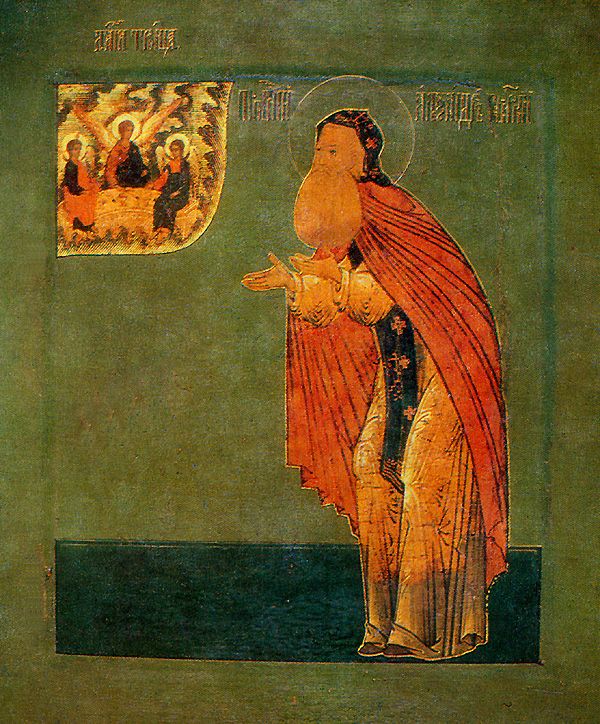 From a contemporary travel chronicle:*

We crossed the Svir River, arriving at the renowned Monastery of St. Alexander of Svir.

The Monastery is composed of two separate clusters of buildings. The older section no longer functions as a Monastery, but rather as a mental hospital. The newer section is renovated and well equipped. It has an enormous interior courtyard with a free-standing Katholikon [main church] in the center.

From the guided tour given to us by one of the monks, we will relate the most salient points about the history of the Monastery and the life of St. Alexander. 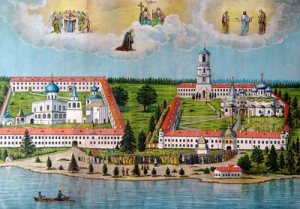 Following a Divine command, he left Valaam and came here, to the region of the Svir River.

He was a man of great faith and virtue; indeed, he was counted worthy of beholding the Holy Trinity. Everyone acknowledges that few have been vouchsafed such a vision of God in their lifetimes.

He gradually built the Monastery, which he dedicated to the Holy Trinity. Innumerable souls lived here as monastics and found their salvation near him. Many of these have been proclaimed Saints.

St. Alexander reposed in 1533. Throngs of believers began to flock to his grave, many of whom were miraculously healed.

The Monastery was destroyed by German and Lithuanian invaders in 1628. It began to be rebuilt later; shortly after this, the incorrupt Relics of the Saint were found among the ruins.

The Monastery underwent further tribulations during the reigns of Peter the Great and Catherine II, but it also experienced an extraordinary spiritual blossoming in the nineteenth century through the disciples of the great St. Paissy (Velichkovsky). 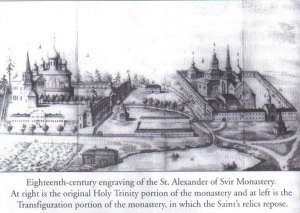 In this sanctified place, the Abbot Evgeny and five other monks received a martyric death in 1918.

The third day of Pascha, a group of Red Army soldiers entered the Monastery with blasphemies and curses. They peremptorily demanded that Abbot Evgeny, the sacristan, and the guestmaster hand over the keys to the Monastery sacristy, with the obvious intention of plundering whatever valuables they could find. The Fathers tried their best to reason with them, so as to dissuade them from their intention and to protect the Monastery property. Not only were the soldiers not persuaded, but they instead became even more enraged. Without any delay, and with summary procedures—something very typical of the time—they condemned them to death. First, they ordered the six Fathers to dig their own grave: a large pit in the middle of the Monastery courtyard, towards the right. When the Fathers had finished digging, the soldiers stood them next to the pit. The firing squad took position. At this tragic moment, the condemned Fathers asked for a favor: that they be allowed to chant “Christ is Risen.” Possessing no such sentiments in their hearts, the “Red” soldiers refused. The Fathers then quickly began to chant “Christ is Risen,” but the firing squad did not allow them to finish. Successive shots were heard and the Fathers fell dead into the pit. And something strange happened. The guestmaster had a long black beard, which instantly turned white when he was standing in front of the pit!

The soldiers did not stop there. They entered the church where the Relics of St. Alexander, the founder of the Monastery, lay. Seizing them, they threw them into the fire. The fire, however, preserved the Relics and did not consume them. In this way, St. Alexander suffered martyrdom after his death, as if he, also, wished to share in the martyrdom of the modern-day New Martyrs of his Monastery.

A certain Karelian Novice, John, who was hiding in the attic, saw and related all of these things. The Monastery of St. Alexander shared the same fate as the rest of the Monasteries in Russia. It was closed and used for other purposes. At first, it was turned into a “pedagogical technical institution,” in order to justify the seizure of its extensive library and other valuables, and then into a concentration camp. A rock crushing facility was also created, where the unfortunate prisoners were worked ruthlessly. 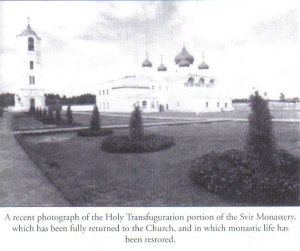 In 1995, the Monastery re-opened and the first monks settled in. Ten monks live here today, with Archimandrite Lukian as their Abbot.

From the moment that the monks arrived, they sought the Relics of St. Alexander. Fortunately, the Holy Relics were found at the Military Academy museum, where there was a museum of mummies. The monks asked to take the Holy Relics, but the Directors of the museum refused, under the pretext that the body had been embalmed: it was a “mummy,” like all of the others in the museum. The monks insisted, explaining that the body had not been embalmed. It had been found miraculously incorrupt several centuries earlier, and this incorruption was not attributable to human science. This was why his intestines had not been removed, as in the body of Lenin and other mummified bodies. In the face of the persistent refusal on the part of the Directors, the monks offered to bring an X-ray machine and to take radiographs. The Directors agreed, the body of the Saint was submitted to radiography, and the truth was established. The innards of the Saint were untouched, and consequently he had not been embalmed. The Directors of the museum were astonished and yielded to their request. Thus, after seventy-nine years of exile, the Saint returned to his Monastery in 1997. 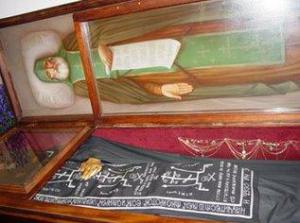 We entered the Katholikon, and the monk showed us the reliquary with the Relics of the Saint, which is situated to the left and in front of the north door of the Altar. Approaching to venerate it, we were astonished. The Saint’s body is covered by his rason and schema. Only his hands and one foot are visible. His body has preserved its natural color; one would think the Saint had just passed away. Neither the passage of the centuries since the Saint’s repose nor the fire by which the atheists attempted to destroy it in 1918 had brought about the slightest change. Both time and fire had preserved it. An Icon has been placed above the covered face of the Saint. (Out of respect, Russians generally cover the heads of Saints.) 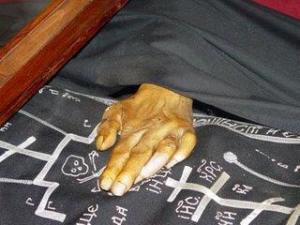 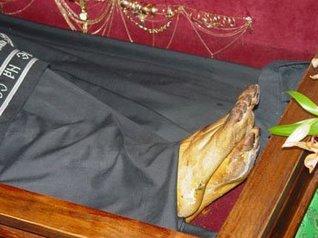 The monk who was with us said:

“At the beginning of the twentieth century, a certain Iconographer, having seen the Saint’s face, painted it exactly as it was. After the closure of the Monastery, this Icon disappeared. It was finally found in the hands of a merchant, who gave us the Icon when the Holy Relics returned to the Monastery, and we put it in its place.” 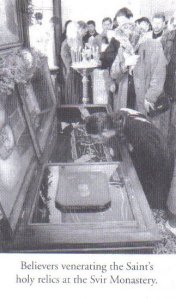 We venerated the Relics with deep emotion. “Truly wondrous is God in His Saints.” We then visited the older Monastery, dedicated to the Holy Trinity, which is located very close to the newer one. The greater portion of it is a mental hospital, whereas the two churches and the other buildings are undergoing initial renovations.

We entered the old Katholikon, which was built in the seventeenth century and is dedicated to the Holy Trinity. The Church had contained Iconography, but it was whitewashed to cover up the frescos.

The monk told us, among other things:

“This Church had been turned into a warehouse before being abandoned. There was no heating. The windows were broken, water came in from all sides. From the day that the Church began to be used again and prayers were offered up, we noticed something marvelous: the Icons began to clean themselves. Every day they improve and more details appear!”

We thanked our hospitable monastic guide and left for Olonets, where we stayed overnight.

Apolytikion in the Fourth Tone
Thou didst settle in the wilderness from thy youth eager to follow Christ’s footsteps, O Alexander. The Angels were amazed when they beheld thee struggling in the flesh and conquering onslaughts of passions. Dwelling on earth thou wast equal to the Angels. Pray to Christ our God to save our souls.