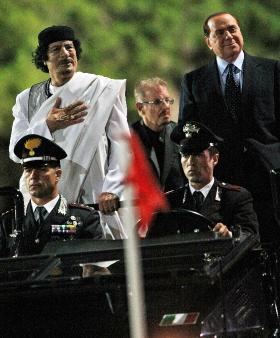 During a visit to Italy, Libyan leader Moammar Gadhafi enrages opposition parties by saying Islam must become ‘Europe’s religion’ and that Europe’s conversion would ‘begin when Turkey becomes an EU member.’ Gadhafi made the comments during a lecture to a group of 500 young women hired and paid by an agency to attend his talk.

Libyan leader Moammar Gadhafi’s visit to Rome has become mired in controversy after he said Europe should convert to Islam and the conversion would “begin when Turkey becomes an EU member,” daily Hürriyet reported Tuesday.

Gadhafi, who traveled to Italy to mark the second anniversary of Libya’s friendship treaty with its former colonizer, made the comments Sunday during a lecture to a group of 500 young women hired and paid by an agency to attend his talk.

“Islam should become the religion of all of Europe,” one of the women quoted Gadhafi as saying in the Italian press.

The Democratic Party and the Italy of Values Party criticized Prime Minister Silvio Berlusconi for welcoming Gadhafi, saying the Italian leader was appeasing his Libyan counterpart for monetary gain. A coalition partner, the North League, said Gadhafi had turned Italy into a media circus.

“Gadhafi is putting on a cultural show,” Berlusconi responded.

The North League also addressed Gadhafi’s comments about Turkey in a statement.

“The Libyan leader’s words about Turkey state a fact. Turkey is a danger for the European Union,” the statement read. “That is why we have been campaigning ‘No to Turkey’ for years.”

The agency paid the women, mainly students who hire themselves out for advertising of publicity events, 70 or 80 euros to attend and said it would not pay those who gave their names to the media, Agence France-Presse reported.

It also told them to dress conservatively for the lectures.

About 200 women gathered at the Libyan cultural center in Rome on Monday to attend a second lecture. One of the women present said Gadhafi had said at the gathering that “women are more respected in Libya than in the West” and offered assistance in finding Libyan husbands. “Islam is the last religion and if we are to have a single faith then it has to be in Mohammed,” he said, according to the participant.

Gadhafi’s comments also caused discomfort within the coalition of Berlusconi, a close ally of the Libyan leader.

“Gadhafi’s words show his dangerous Islamization project for Europe,” said Mario Borghezio, a member of the European Parliament with the anti-immigrant Northern League, a junior partner in the coalition, according to Il Messaggero.

Carlo Giovanardi, a government undersecretary, tried to stem the criticism, saying Gadhafi’s words were simply “a remark made during a private meeting.”

Gadhafi, who came to power after the overthrow of the monarchy 41 years ago, landed in Italy on Sunday to mark the second anniversary of a friendship treaty signed with Berlusconi that drew a line through the countries’ bitter colonial-era relationship.

Berlusconi and Gadhafi met privately for 30 minutes on Monday, during which Gadhafi confirmed the policy of opening Libya to Italian investment, a member of Berlusconi’s staff said. After the meeting, the two men toured a photography exhibition tracing the history of the Italian-Libyan relationship, including the bloody colonial period.

Speaking later alongside Berlusconi at a closing ceremony, Gadhafi suggested the European Union pay Libya “at least 5 billion euros a year” to put a halt to illegal migration from its Mediterranean shores. To do so would be in Europe’s interest, he said, if it wants to head off “the advance of millions of migrants” from Africa.

“There is also desirable immigration,” Gadhafi added. “There are Libyans who have money and I encourage them to come to Italy to invest.”

Berlusconi credited good relations between Italy and Libya “for countering with success the trafficking of illegal migrants from Africa to Europe controlled by criminal organizations.”

Ties between Rome and its former colony have deepened since the signing of the friendship accord, with Italy now the third-largest European investor in the North African country.

Italy has said it will invest $5 billion and build a 1,700-kilometer highway in Libya to compensate for its three decades of colonization from 1911 to 1943. The two countries also reached an agreement that allows the Italian navy to intercept illegal migrants at sea and return them to Libya, triggering sharp criticism from the United Nations’ refugee agency and human-rights groups.

Gadhafi traveled, as usual, with a Bedouin tent for his accommodation that was pitched in the gardens of the residence of the Libyan embassy in Rome. In a sign of protest against his visit, an opposition party planted a “tent of legality” in front of the embassy.

Gadhafi was set to return to Libya on Tuesday morning, according to sources with knowledge of the visit.