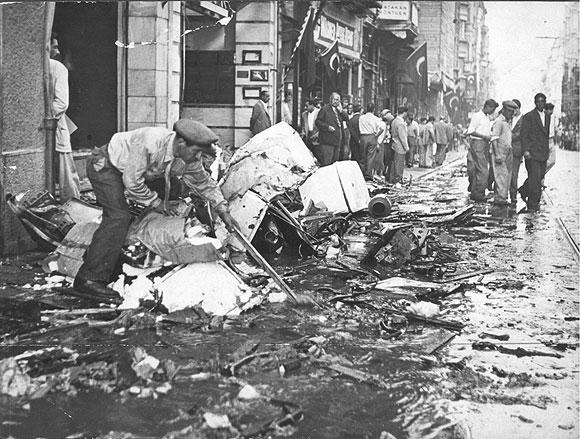 Today marks the 55th anniversary of the Sept. 6-7 İstanbul pogrom, when many houses and places of business belonging to non-Muslims in İstanbul were destroyed after a newspaper headline reported that Mustafa Kemal Atatürk’s home in Greece had been bombed by Greek militants.

An extensive campaign of plunder and lynching was launched against the Greeks and non-Muslims of İstanbul, particularly on the Princes’ Islands, during the two-day incidents. While many non-Muslims lost their lives in the riots, many others were injured and material damage was immense. According to reports, 73 Greek Orthodox churches in İstanbul were set on fire. The Turkish press reported 11 casualties, while the Greek press cited the number as 15.

Angry crowds plundered and damaged almost all places of business belonging to non-Muslims. The damage caused was estimated at around TL 1 billion. A total of 5,104 individuals who were involved in the incidents were detained.

Although the state’s security forces were informed about the developments that could take place, they failed to take any action to stop the angry crowds. Following the incidents, many non-Muslims and Greeks left everything they owned behind and moved from Turkey.

With the Greek population of Turkey dwindling, its influence on the economy also began to fade. Over time, many other Greeks left İstanbul, bringing the total number of Greeks in the city to around 2,500 today.

The cost of the Sept. 6-7 riots was paid by the Democrat Party (DP), which was removed from power following a military coup in 1960. DP administrators were punished for their complacency in the İstanbul pogrom when they were tried on Yassıada, an island off the coast of İstanbul. The prosecution claimed DP leader Adnan Menderes had allowed the incidents to spiral out of control.