13Sept.1922 : The Burning of Smyrna and the Destruction of Eastern Christianity

13Sept.1922 : The Burning of Smyrna and the Destruction of Eastern Christianity 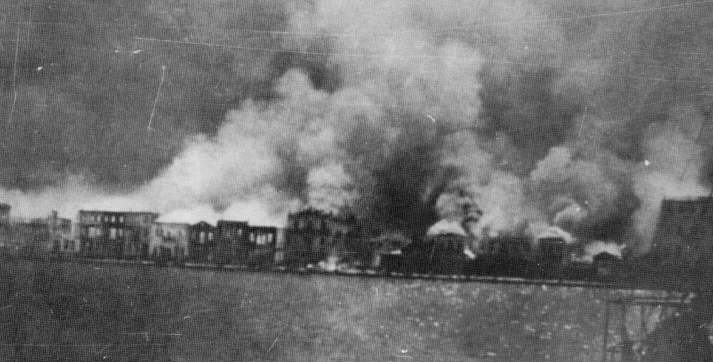 The Great Fire of Smyrna was a fire that destroyed much of the port city of Smyrna in September 1922. Eye-witness reports state that the fire began on 13 September 1922 and lasted for several days. It occurred four days after the Turkish forces under the leadership of Mustafa Kemal Pasha (“Ataturk”) regained control of the city on 9 September 1922. The Burning of Smyrna marked the last chapter in the destruction and Genocide of Anatolian Greeks and of Eastern Christianity in Asia Minor.

“THE last act in the fearful drama of the extermination of Christianity in theByzantine Empire was the burning of Smyrna by the troops of Mustapha Khemal. The murder of the Armenian race had been practically consummated during the years 1915-1916, and the prosperous and populous Greek colonies, with the exception of Smyrna itself, had been ferociously destroyed. The idea has been widely circulated, and seems to be gaining credence, that the Turk has changed his nature overnight” (The Blight of Asia by US Smyrna Counul George Horton)

“In September of 1922, Mustapha Kemal (Ataturk), the victorious revolutionary leader of Turkey, led his troops into Smyrna (now Izmir) a predominantly Christian city, as a flotilla of 27 Allied warships -including 3 American destroyers- looked on. The Turks soon proceeded to indulge in an orgy of pillage, rape and slaughter that the western powers anxious to protect their oil and trade interests in Turkey, condoned by their silence and refusal to intervene. Turkish forces then set fire to the legendary city and totally destroyed it. There followed a massive cover-up by tacit agreement of the Western Allies. By 1923 Smyrna’s demise was all but expunged from historical memory.” (The Destruction of a City by Marjorie Housepian Dobkin)

The Destruction of Smyrna 1922 [With English subtitles] [youtube=http://www.youtube.com/watch?v=1eR712sef5I]

“The Blight of Asia” : The Destruction of Smyrna (September 1922) by US Consul George Horton

“The Destruction of a City,” by Marjorie Housepian Dobkin

Martyrs of the Christian Holocaust