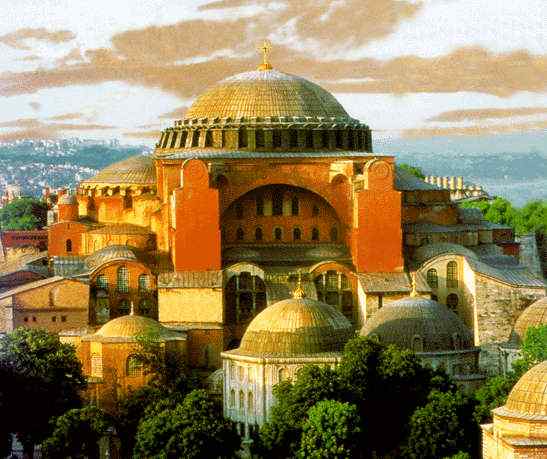 As sympathetic as I am toward opponents of the proposed Ground Zero mosque, I don’t think they realize how fortunate they are to be able to voice their opinions.

Eastern Christians have never had such luxury. The former cradle of Christianity is now filled with mosques. Many were originally our churches, and were taken as spoils of conquest. Consider Hagia Sophia, the Church of Holy Wisdom. Built in the seventh century, this magnificent temple was later visited by emissaries of the Russian Prince Vladimir, a pagan seeking a new faith. “We knew not whether we were in heaven or on earth,” the delegates reported, adding, “we know only that God dwells there among men.” Hagia Sophia was the Patriarch of Constantinople’s cathedral for a thousand years, until 1453. Then, after generations of effort, the Turks sacked the capital, extinguishing Eastern Christendom’s temporal glory and throwing millions of Orthodox Christians into centuries of darkness.

When the Turkish Sultan Mehmet II battered down the doors of Hagia Sophia (where Orthodox clergy were celebrating a final Eucharist) and proclaimed the Islamic credo, “There is no God but Allah, and Muhammad is his messenger,” Hagia Sophia was transformed into a mosque. Icons that couldn’t be destroyed were plastered over. Crosses were torn down, replaced with the crescent moon.

Appointing a new Patriarch, the Sultan consigned him to a ruined church out of sight. Over ensuing generations, the patriarchate was progressively dispossessed of its churches until today it huddles on the verge of extinction within a walled compound in Istanbul’s red light district.

This is an abiding theme of Orthodoxy’s encounter with Islam: defeat followed by dispossession, prominent churches becoming prominent mosques.

I’ve never been to Constantinople, but I’ve seen a similar story in Serbia. On a tour of her spiritual treasures, I journeyed to Serbia’s oldest temple — the seventh-century St. Peter’s Church. It wasn’t converted into a mosque, but a forest of minarets now surrounds it.

When the Turks conquered this land, many Orthodox families became Muslim to avoid the “tribute in blood.” This was the policy that each infidel family must surrender their eldest son to be converted to Islam and enrolled in the Janissaries — the Sultan’s personal bodyguard.

To keep their children, the population of Serbia’s ancient capital became overwhelmingly Muslim. Their ancestors worshipped Christ in St. Peter’s Church, but they now heed the call of the muezzin, blasted from loudspeakers strapped around every minaret.

When I spoke with some young, nominally Orthodox Serbs about this jarring juxtaposition, and suggested an effort to re-evangelize these lost sheep, they thought I was nuts. “You cannot convert a Muslim,” they said, “They’ll kill you. All we can do is stop them from building mosques. They should at least keep them out of sight.”

Which brings us back to Ground Zero. Efforts to block this mosque will fail. Not only will they prove unconstitutional, they’ll give Muslims an excuse to claim persecution, and our liberal intelligentsia more ammunition to shoot at our cultural heritage.

Counterintuitive though it seems, perhaps this mosque is precisely what’s needed to make us examine our priorities. In the wake of 9/11, we were told to “go shopping” to demonstrate our resilience, as if our future could be assured through better consumerism. In another age, we might have taken refuge in churches rather than department stores. Perhaps what frightens us about Islam is that it inspires a level of devotion in its followers that we no longer want to be confronted with in our complacent age.

We subconsciously interpret this mosque as a symbol of our own spiritual anemia, and fear the challenge it presents.

The real question is not what we’re against, but what, if anything, we’re for. The tragedy is not that Muslims want to worship their god, but that we’ve become a stranger to ours.

A crowded mosque is nowhere nearly as disturbing a symbol as is an empty church.