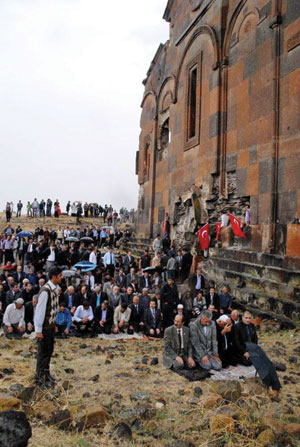 Hundreds of Turkish nationalists held Friday prayers at the ruins of an ancient Armenian cathedral, a move widely seen as a response to a landmark service held by Armenians last month in the same region.

Devlet Bahceli, the leader of the Nationalist Movement Party, or MHP, which organized the event in the eastern province of Kars, prayed in the front row of a crowd assembled inside the decaying 11th-century cathedral at Ani. The uninhabited archaeological site at the Armenian border was once the capital of a medieval Armenian kingdom.

Bahceli traveled to Ani in a convoy of several hundred supporters carrying Turkish flags and chanting “Allahu Akhbar” ([the Mohammedan] god is great).

The MHP said it was following the example of Selçuk ruler Alp Arslan, who removed the cathedral’s cross and prayed there following his capture of Ani in 1064. Because of this, the building is also called the “conquest mosque” by Turks.

The prayers at the site were made possible by authorization from the Culture Ministry, which also allowed the landmark Sept. 19 ceremony at the Surp Haç Church on Akdamar Island in the eastern province of Van.