Justice for genocide should have no expiry date

Justice for genocide should have no expiry date 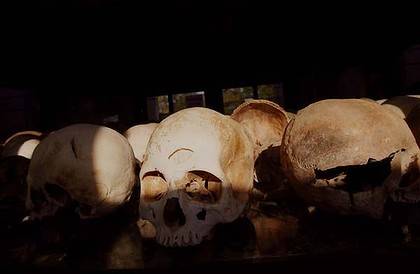 After World War II, the Germans gave us their new term for reparation payments to be made to Holocaust survivors — wiedergutmachung. At first, the English translation, making good again, sounded profound and exotic — until I realised that dead husbands, wives, parents, children and the half-alive survivors can’t be restored in the way the term suggests.

So what kind of justice is there for victims of genocide? In the long road towards some moral standard, one that includes the victims as part of the atrocity, an admission of responsibility by the perpetrator is a start, if not the start. The Germans readily admitted their role in killing 30 million people, including 6 million Jews, 3.5 million Poles, 8.2 Russian civilians, 5.7 million Russian prisoners of war, 5.9 million Ukrainians and 500,000 Gypsies. The next milestone is criminal trial of both the architects and the mechanics of mass murder in the pursuit of both punishment and a sense of retribution. Most people know a little something about the Nuremberg Trials of the 22 leading Nazis; few know that since then, more than 110,000 domestic trials have taken place in both Germany and Austria, albeit with low conviction rates. They continue, without an expiry date, as this is written.

But justice, of any kind, appears to exist only for «worthy» victims: very few prosecutions were for crimes against Gypsies (Romany people) for example. And it took just over a century for Germany to admit that it committed genocide against the native Nama and Herero peoples of what was once German South-West Africa (now Namibia). The crime was admitted in 2006, but with the rider that no reparations would be paid.

Admission of responsibility, trial, apology, restitution, reparations, reconciliation (of sorts) enable a pathway to that dearly beloved cliche of our time — «moving on». (Moving on is just fine, provided one knows what it is one is moving on from.) Restitution can involve giving back the giveable and restoring the restorable (like the thousands of Nazi-looted art pieces). Reparations means money for civil wrongs, however tokenistic, when physical restitution isn’t possible. The Germans have paid reparations money to Israel and to individuals, but the sum for each surviving slave labourer has averaged about $10,000. Romany people got nothing, not even a «token nothing». Their requests to the German government were deemed «unreasonable» and «slanderous» and in 1980 the Mayor of Darmstadt refused their participation in a ceremony commemorating the liberation of the Bergen-Belsen camp because it «insulted the memory of the Holocaust».

A decade ago, Roy Brooks edited an acutely titled volume, When Sorry Isn’t Enough. A singular omission was an Australian entry among the dozens of cases of apology and reparations for the victims of human injustice from around the world.

The Australian path has been lamentable. In 1992, prime minister Paul Keating’s Redfern speech about our treatment of indigenous Australians admitted the murders, dispossessions, the alcohol, diseases, the removal of children, the smashing of traditional life and their exclusion from society and its benefits. This was one kind of balm for the victim people. The Howardites saw this moral inculpation as a slide towards costly economic reparations, refusing to admit or to apologise for just that specific reason. The Ruddites apologised in 2008, with some reluctant and even truculent bipartisan support — but everyone was happy enough that the rider to the apology was that there will be no reparations. And so only Tasmanian Aborigines, who received a state apology in 1997, now have a state-initiated $5 million fund to disburse to the surviving stolen generations.

The ultimate negation is, of course, the Turkish denial of its genocidal campaigns against Armenians, Pontian Greeks and Christian Assyrians between 1915 and 1922. There is no admission, no accountability, no responsibility, no apology, no restitution, no reparation and no justice. There is only a paranoid denialism and the counter-claim that more Turks than Armenians died in a «civil war»: Turks were simply and only defending themselves against a traitorous and fifth-columnist minority who were aiding their enemies. Turkey is totally dedicated, at home and abroad, to having every hint or mention of an Armenian genocide contradicted, countered, explained, justified, mitigated, rationalised, relativised, removed or trivialised. The entire apparatus of the Turkish state is tuned to denial, with officers appointed abroad for that purpose.

In September this year, Turkey allowed Armenians to conduct a religious service in a former major church at Akhtamar on an island in Lake Van, one they turned into a museum. In what was intended as a public relations exercise, the Turks banned the erection of a cross on the dome for this momentary revisiting of some grim history. And for as long as Turkey denies that anyone died at their hands, and refuses to release any death records, descendants of the dead can’t claim the millions in insurance policies taken out by parents and grandparents with American and French companies.

Rwanda, Burundi, Bangladesh, Cambodia, Bosnia-Herzegovina and Indonesia have acknowledged, in their way, that «something happened» in their domains this past century. For the perpetrators, admission, even apology, is usually about a regret, however fleeting, passing or superficial, that they were once the sort of people, or the sort of nation, that they now wish they had not been at those points in time. But Turkey will neither concede such blots on their escutcheon nor admit their homicidal treatment of Christians over a very long time. Their victims have died twice: physically in the killing fields and then obliterated from the history books.

Colin Tatz is a visiting fellow at the Australian National University and a director of the Australian Institute for Holocaust and Genocide Studies. He was part of a panel yesterday, Genocide: Does justice have an expiry date, at the Jewish Museum of Australia in Melbourne.