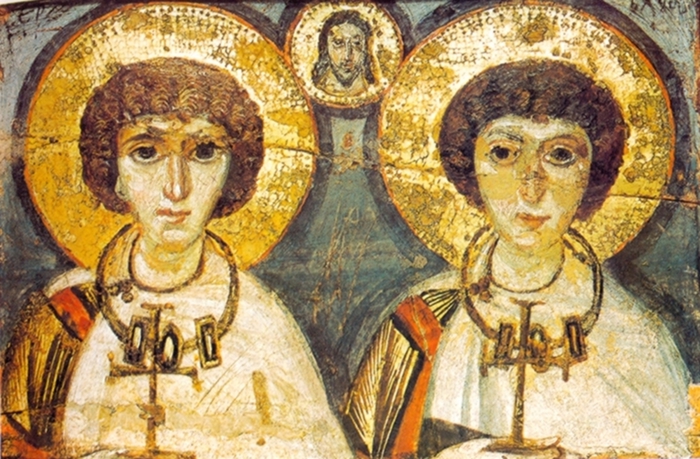 The term Byzantium is rashly given to the Christianized eastern part of the Roman Empire, which had Constantinople as its administrative and cultural center and which controlled significant regions of Europe, Asia and Northern Africa from 330 to 1453. At its acme, it extended from the Euphrates to Spain and from the Nile to the Danube. The various peoples that inhabited these lands had a common characteristic: they were influenced, more or less, by Greek civilization, which was mainly conveyed through language.

Until the time of the Emperor Heracleios (610-641), Latin was used, though not extensively, in legislation and the practice of the law, in the army and in administration. However, Greek had long ago been designated the language of the local courts, as the medium for notary deeds as well as for legislation (Νεαραί). In the early centuries of Byzantium there was a type of administrative bilingualism, namely a parallel use of Greek and Latin. Thus, although Heracleios designated Greek as the formal language of the state, court rituals, legislation, the military administration and the economy (names used for coins, taxes and institutions) all retained Latin terminology.

The acceptance of Christianity as the official religion constituted the cornerstone of the social and moral-philosophical edifice of the Byzantine Empire. Until the 10th century at least, the term Greek did not signify national identity, but rather the adherence to paganism. The made-up term «ελληνοθρησκοχριστο-βλάσφημος» (“Helleno-religio-Christ-blaspheming”) sums up the spirit and mentality of an entire era. Byzantium had an innate antipathy to Hellenism, nevertheless it accepted “ελληνίζειν”, or the use of the Greek language by Christians. Gregory of Nazianzus rebutted the claim of Julian the Apostate (331-363), who considered the Greek language an organic part of ancient religion, and, thus, alien to Christianity.

It has been claimed that the rapid spread of Christianity owed much to the fact that St. Paul’s Epistles, the Gospels and the works of the early Apostolic Fathers were composed in Greek – and, even more so, in eminently approachable Greek. In the words of St. Paul, “εάν μη εύσημον λόγον δώτε, πώς γνωσθήσεται το λαλούμενον; έσεσθε γαρ εις αέρα λαλούντες» (Corinthians, Α 14.9). Greek was also the language used by the Great Fathers of the Church, the language used in the ecumenical synods, theological treatises and the canons of monastic life. Thus, it was in Greek that Greek paganism was rebutted and in Greek that the Church declared its distrust of everything Greek.

The principal characteristics of Byzantine spiritual life were the total submission to Christianity and the assiduous concentration on the knowledge of Greek. However, this knowledge of Greek bears the seed and stigma of discord. On one side is the evolved Koine, which continued to advance toward simplification and uniformity, and which easily assimilated all loan words. On the other lies the frigid, aristocratic, literary and scholarly language, the Atticizing language that is supported by the Archaistic tradition of education. With time, this gap increased, resulting in an official bilingualism. The “private Koine”, with its numerous local variations -and the Atticizing idiom, with its numerous embellishments and levels- created a linguistic Babel, which discouraged even the most indefatigable scholars from studying the Byzantine language.

For that reason, Byzantine scholars supported the doctrines of Christianity, but cast in the language of Attic orators and Plato. Ordinary people, especially those of the countryside, expressed themselves in the vernacular Koine, which developed far from any scholastic influence. Thus, it is no surprise that the bulk of Byzantine texts that survived belongs to the scholarly tradition, whereas the samples of spoken language, especially of the first centuries, are so few. The paucity of sources makes the study of the development of the language more difficult. Scholars only note the existence of that «popular idiom» (according to George Tornikis, 12th century B.C.) or the «lité» language (the term appears in the Life of Saint Peter of Atroa, which was written by his pupil, the monk Savvas, in the 9th century A.D.).

The highly artificial and pretentious language, which is mainly written, and the lively and effortlessly colloquial, coexist in Byzantium, almost ignoring each other’s existence. This phenomenon is mainly due to the lack of essential contact between the popular strata (especially the populations of the countryside and the remote border regions, such as Cappadocia, the Pontos and Southern Italy), with the decision-making centers, where all the spiritual leaders and government officials were located. Nevertheless, two basic factors of Byzantine life, namely the Church and the State, were, thanks to their mission, in close, everyday contact with their citizens. Those two institutions formed the link between the ordinary people and the ruling class, that relatively small group which possessed wealth, knowledge and influence. It is revealing that the texts stemming from those two institutions tend to become, despite their anchyloses, more accessible to the wider social strata. For this reason, the hagiological and hagiographical texts (Lives, deeds and miracles of the Saints, and services of local Saints) are composed in simple language, very close to local diction. On the contrary, nearly all profound theological treatises, sermons of the bishops, speeches delivered in court or the Epiphany adopted an archaizing language. In any case, the Byzantine period was dominated by the literature of religion and communication, which is always composed in an archaistic language.

The language of state administration was also adapted to the circumstances. The tax manuals, land deeds and cadastral records, the scholia to current legislation (such as Πείρα by Eustathios of Rome and Τιπούκειτος by M. Krites of Patzis), notary documents and formal imperial decrees, including golden bulls, were composed in a simplified language. Thus, the administration adopted the μέση or middle language, although its functionaries came from the ruling class and were by and large graduates of the University of Constantinople (sic). We must stress here that the Law School of that University, particularly following the reforms of Constantine the 9th, the Monomach (1042-1055), was the hotbed par excellence of Byzantine bureaucracy. This tradition encouraged Constantine the 6th, the Porphyrogenitus (905-959), who used to dine with the University students and attempted by himself to codify the rules of administrative organization in a simple and accessible form.

Thus, the administration, both church and state, had one major concern – to be comprehensible. This is the reason why Leo the 3rd Isavros (717-741) called for the revision of the laws known as Εκλογή Νόμων. The result was a style of linguistic expression that might be characterized as either a simplified scholastic style or a refined popular language – essentially a mixed one. The most characteristic examples of this language were the Τακτικά by Leo 6th The Wise (886-912), which were reissued for the military, and the treatises of Constantine 6th, Porphyrogenitus, De administrando imperio, Περί θεμάτων, as well as his orations to the army in the East.

The texts handed down to us from private individuals (such as wills) reflect the education of their composers or even the standardized expressions of the notary, which was influenced by the language of the time as well as by the area. Probably we can support the idea of a Byzantine Koine, which was basically a mixed language. This language was adapted to frozen bureaucratic expression and reflects the educational level of its author, but it is not estranged from the average citizen. This mixed language of the administration has its roots in the bureaucracy of Ptolemaic Egypt but also forms an important achievement of Byzantine administration and still awaits serious study.

Very few texts allow us to form a clear picture of simple everyday language – the «λιτή». Our sources are mainly fragments of dialogues, stock expressions, such as the reactions of people in the Hippodrome, proverbs and the sayings of great men, inscriptions (the early Bulgarian historical inscriptions of Plisca), books of dream interpretation, practical medicine, spells, wishes, curses and numerous chronicles. To them one may add military chronicles, sermons (cf. Sermons of the Old One on the Holy Icons, 8th century) and Portolans. However, the main source for popular language is popular poetry, which includes the poems of Ptohoprodromos, the games (cat fights), the acritic circle with laments for the lost lands and the sophronistic musings on death.

At the time of the Comnenes, novels, especially with themes of romance, became very popular. Although this genre was clearly influenced by the western tradition (the chivalric novels composed in verse), its roots go back to the Hellenistic and Roman periods. The language was mixed, with scholarly origins as well as a strong influence from the everyday language.

By far the greatest portion of Byzantine literature belongs to the scholarly tradition. Authors did not limit themselves to the reading of great prototypes, but also turned to reference books created by the Atticists: lexical, encyclopedias, anthologies etc. The Byzantines were appalled by the Classical spirit, but they were attracted to Classical literature. Thus, we owe the preservation of Classical literature largely to the Byzantine intelligentsia. Despite the outcry of the fanatical clergy against the ancient world, the scribes in the monasteries worked hard to enrich the libraries of the Palace, the Patriarchate, the bishoprics and others with classical texts.

Epistle-writing was the most characteristic example of archaistic literature. This genre, despite its mannerisms and hermetic style, remained the most reliable source for the dissemination of ideas in Byzantium. The persistent mimesis of classical prototypes did not always indicate the lack of original thought, but formed an element of each renaissance.

The humanistic movements in Byzantium were characterized by a turn towards ancient literature and education, and, as a result, linguistic archaism. Following the fall of Constantinople to the Latins (1204), the scholarly literary tradition continued on the periphery, in the Empire of Nicaea. This Movement was led by the historian George Acropolites (1217), the intellectual Emperor Theodore 2nd Lascaris (1254-1258), Nikiphoros Vlemmydes (1197-1272) and George Kyprios, later known as Gregory the 2nd, Patriarch of Constantinople (1283-1289).

The Paleologian Renaissance was the swan song of the Byzantine spirit. Religious strife as well as the danger from the East revived spiritual activity and inspired the creation of works of art that enriched the archaistic tradition, with only a few exceptions. This was the time when Thessaloniki and Mt. Athos claimed the spiritual and intellectual primacy from Constantinople. However, the intellectuals of the time, secular, as in the case of Theodore Metochites, clergymen, and Emperors, such as Manuel B Paleologos (1391-1425) found themselves trapped in a frozen linguistic archaism that did not do justice to the originality of their thought.

The Koine that was bequeathed to Byzantium was a language that showed a sharp tendency towards simplification and normalization. Thus, it was able to form another binding element between the peoples of the Empire, alongside religion. However, the national and social heterogeneity of Byzantium precluded the formation of a common style of expression. This inevitable development was also spurred by the archaism of the spiritual leaders, who despised the language of the people and considered it appropriate only for spiritually and intellectually underdeveloped human beings. This was illustrated by the fact that the epistles of John Apocaucos (1150/60-1232/5), which were composed for women, were written in a much simpler language than that of other works by the same author. Nevertheless, the final blow was delivered by the Frankish occupation. With the estrangement of the conquered areas from the metropolis, the relatively homogeneous Koine began to differentiate into dialects and idioms. With the exception of the dialect of Tsakonia, which derives from the ancient Greek Neo-Laconian dialect, all other modern Greek dialects derive from the Koine.