The Protection of the Most Holy Theotokos

The Protection of the Most Holy Theotokos 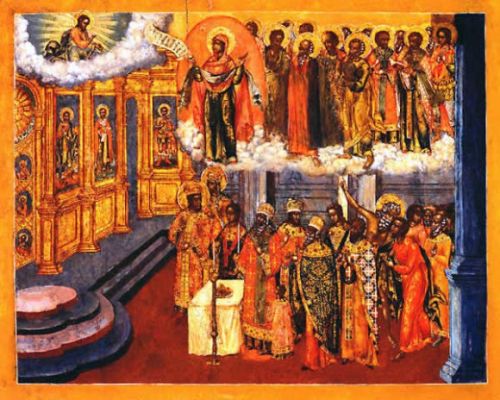 This feast of the Protection of the Theotokos is neither one of the Twelve Great Feasts of the Church nor is it a commemoration of any events in the earthly lives of our Lord or His Mother. So why does the Orthodox Church here in twenty-first-century North America keep this feast?

From the fifth to the fifteenth centuries, Constantinople presided over a glorious civilization. On scores of occasions over the course of those centuries, however, Constantinople came under grave threats. More than once, the Byzantine Empire along with its capital teetered on the verge of collapse. One of the most perilously dramatic moments in the history of the city took place in the 860 s.

The city, as often happened, fell under barbarian attack. The massive gates of the city were closed. The port was sealed off. The people manned the defenses and prayed. The attackers pre-Christian Russians reputed for their great brutality descended with a fleet that threatened to overwhelm the defenses of Constantinople. The first assaults on the city went badly for the defenders. During one of the lulls in the fighting, however, the people of the city were able to gather together for prayer inside the Church of the Virgin at Blachernae where the veil of the Virgin Mary was kept and venerated.

While a service was being sung in the church, a holy fool, the Blessed Andrew, saw the Theotokos in a vision. As she was carrying her veil, she stretched it out over the city and over all the people defending it. Beneath her protection, Blessed Andrew and others were shown, the people of the city could take refuge. As part of the veil that the Theotokos was carrying was dipped in the waters of the Bosporus, an incredible storm began to brew. The attacking Russians, allowed to see the Theotokos, were accordingly disturbed by both her appearance and the dramatic change in the weather. Depending on the account one reads, the Russians were either scared off or overwhelmed by the storm. Regardless, the people of Constantinople believed that the Lord, through the prayers of His Mother, had preserved their city from certain destruction. The Orthodox faithful preserved in their memory this specific intervention of the Theotokos in the affairs of God s people; thus the feast entered into the liturgical life of the Church.

Today, Orthodox Christians still remember this event. The Russians, particularly, have a deep love for this feast. A surprisingly large number of churches throughout Russia, in fact, bear the name Protection (Pokrov) of the Theotokos. The great irony of the Feast of the Protection is that those who most faithfully keep this feast are the biological descendants of those pre-Christian Russians who were scattered at the gates of Constantinople! (In the ninth century, of course, the Russians were still pagans and constituted, most likely, the Byzantine Empire’s greatest foes. It was not until 988 that the Slavs of Rus were permitted to hear the Gospel and be baptized.)

What might the Feast of the Protection mean to us today here in America? First, we are reminded that the prayers of the Theotokos avail much. She bore Jesus. She was His Mother. She tended His scrapes. He suckled at her breasts. Thus, her proximity to Him is a comfort and a support to us. When we cry out to her, “Most Holy Theotokos, save us!” we proclaim that she who remained at the foot of the Cross can support us as we journey down the Way of the Cross.

This feast also reminds us that, like our Orthodox fore-bearers, we are to remember and cherish the good things that have been done for us. Our Divine Liturgy especially the rich prayers of the Anaphora exhorts us to remember:  remembering this saving commandment and all those things which have been done for us  We recall all the things He has done and then we thank Him. We thank Him for the intercessions of His Mother, remembering what she has done. We thank Him for the testimony of His saints those glorified and those known only to Him and remember their deeds.

On this feast, let us be encouraged that the Lord, through the prayers of His Mother, is quick to help not only the Church, but also the people immediately around us. Asking for her intercessions as from our own mothers, let us also take stock of all the good things that the Lord has already done for us.