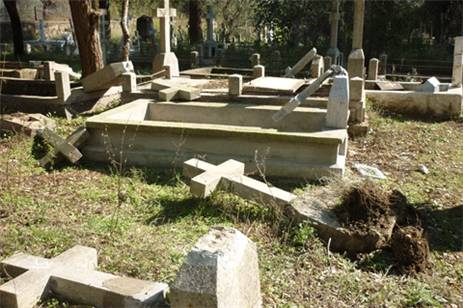 Several grave stones in a Greek Orthodox cemetery in the Aegean island of Gökçeada were vandalized on the night of Oct. 28, according to a press release sent to Today’s Zaman by the Foreign Ministry.

The release added that the incident was made public upon a criminal complaint filed at a prosecutor’s office by the Gökçeada Municipality. An immediate investigation was launched into the incident. Efforts are ongoing to catch the perpetrators of the attack.

“Necessary measures have been taken to prevent the recurrence of such an event,” the release added. The attack is reminiscent of the Cage Plan, which was allegedly prepared by a group in the military.

The Cage plan was exposed during a police raid on the office of retired Maj. Levent Bektaş as part of a probe launched after the discovery of a large arms cache in İstanbul’s Poyrazköy district in April, within the framework of the investigation into Ergenekon, a clandestine organization accused of plotting to overthrow the government. The Cage Operation Action Plan sought to intimidate Turkey’s non-Muslims and assassinate prominent non-Muslim figures in order put domestic and international pressure on the Justice and Development Party (AK Party), which would in turn was supposed to lead to diminished public support for the party.