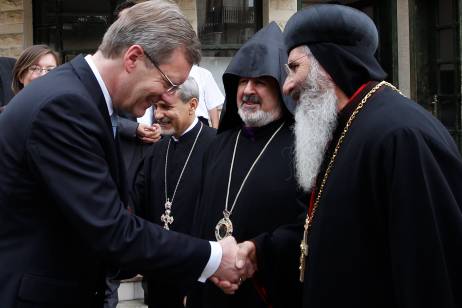 The small Christian minority in this predominantly Muslim country is hoping for an improvement to its legal and social situation as Turkey comes under increasing pressure to address their problems and after Abdullah Gul, Turkey’s head of state, said publicly that he is also the president of non-Muslims.

«We are citizens of Turkey,» Bishop Grigorios Melki Urek of the Syriac-Orthodox Church said at a religious ceremony in the city of Tarsus in southern Turkey last week. «Of course we want to improve existing laws, not only for the benefit of Christians, but for all of Turkey.»

Bishop Urek had travelled to Tarsus from his home in Adiyaman in north-eastern Turkey to participate in a church service attended by Christian Wulff, the German president. The ceremony was part of a week-long state visit to Turkey by Mr Wulff. Representatives of five different Christian denominations joined the president for the service in the St Paul church of Tarsus, named after Paul, a key figure in early Christianity who was born in Tarsus about 2,000 years ago.

With his visit to the site, Mr Wulff showed his support for demands to turn the church in Tarsus, which currently serves as a museum and can be used for religious services only with a special permission by authorities, into a permanent place of worship.

About 15,000 tourists from Italy, Germany, Poland and other European states visit Tarsus every year, according to local authorities. Three Italian nuns, the only Christians in the city, prepare the church for religious services once tour groups receive permission for them. Religious symbols such as crosses have to be removed from the building after every occasion.

Turkey is under pressure from the European Union (EU), which it wants to join, to improve the legal situation of the about 100,000 Christians in this nation of more than 70 million. Christian communities face problems in acquiring and administrating properties and a ban on the training of new clergy. Turkish nationalists regard Christians with suspicion because they see them as a threat to national unity. At least five Christians have been killed by nationalist extremists since 2006.

Another problem is that Turkey officially recognises only the Greek-Orthodox and the Armenian communities as Christian minorities. Other Christians, such as Catholics, Syriacs or Protestants, have no legal status as religious groups. But even recognised communities face difficulties that the EU says have to be addressed if Turkey wants to become a member.

Referring to the principle of religious freedom, Mr Wulff said in Tarsus that, «it is a human right for religious communities as well as for individuals». He said he hoped for improvements for Turkey’s Christians in the near future and listed difficulties with the Christians’ legal status, problems with running churches and the education of new priests as the areas where changes were most pressing.

In his meetings with Turkish leaders and in a speech before the Turkish parliament in Ankara, Mr Wulff reminded his listeners that Turkish Muslims enjoyed religious freedom in Germany and that Turkey should grant the same rights to its Christians.

«Without a doubt, Christianity belongs to Turkey,» Mr Wulff told parliament. Several weeks earlier, Mr Wulff was applauded in Turkey and severely criticised by right-wing politicians in Germany for declaring that Islam, the religion of most of the three million Turks and Turkish-born citizens in the country, belonged to Germany.

During a joint press conference with Mr Wulff in Ankara, Mr Gul, the Turkish president, was asked whether he supported the statement that Christianity had a place in Turkey.

«Of course we have non-Muslim citizens,» Mr Gul replied. «We have Christian citizens. We have Jewish citizens. I am also their president. They are our citizens as well.»

In Tarsus, Bishop Urek and others welcomed the messages of support and the visit by Mr Wulff. «This is very important for us,» the bishop said. «We are hoping for improvements,» said Spiro Teymur of the Greek-Orthodox Church.

Local Muslims said they supported calls to grant Christians more rights. «Everybody should be able to express his faith and respect the others,» said Durmus Binay, a cutler in the bazaar of Tarsus, not far from St Paul’s Church. He said he supported the idea of opening the church for religious services permanently. Necati Deveci, a clothes merchant, agreed. «Everybody is equal. We are all worshipping the same prophets anyway,» he said.

The government in Ankara has passed several reforms in recent years, among other things lifting a ban on building new churches. In addition Ankara has said it is trying to help the Christians further.

A few days before Mr Wulff travelled to Turkey, the government agreed to grant Turkish citizenship to 14 Greek-Orthodox bishops from Greece and the United States. The step was designed to save the Orthodox clergy from dying out. The church has been unable to train new priests and bishops in Turkey since the state closed down a seminary near Istanbul in 1971, leading to fears that Bartholomew I, the 70 year old Ecumenical Patriarch of Constantinople and spiritual head of 300 million Orthodox Christians worldwide, may be the last leader of the patriarchate, an institution founded 1,700 years ago. Turkish law says the patriarch has to be a Turkish citizen.

After his meetings in Ankara, Mr Wulff hinted that the Turkish government was working on a formula to re-open the seminary next year.

«We are going in the right direction,» he said about the government’s position.