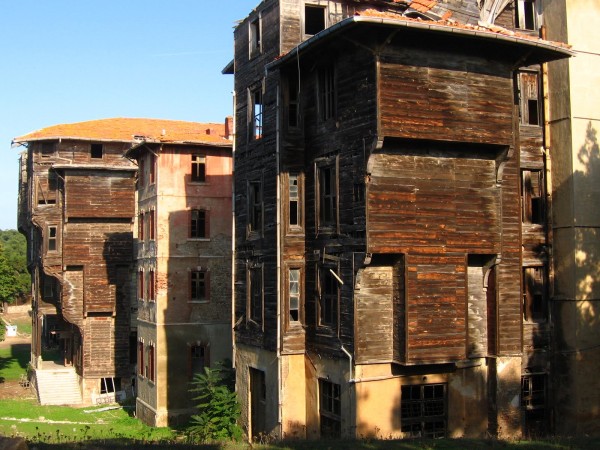 The title deed for the Büyükada Orphanage was delivered to Cem Sofuoğlu, an attorney representing the Greek Orthodox Patriarchate, on Monday, prompting the patriarchate’s attorneys to request the return of other buildings that belong to Turkey’s Greek minority foundations. Patriarch Bartholomew (inset)

As the return of the Büyükada Orphanage to the Greek Orthodox Patriarchate was completed this week, the patriarchate’s attorneys have begun a similar process for the return of other buildings that belong to foundations of Turkey’s Greek minority.

The title deed for the orphanage was delivered on Monday. Cem Sofuoğlu, an attorney representing the Greek Orthodox Patriarchate, received the title deed for the Orthodox orphanage for boys and then delivered it to Patriarch Bartholomew. The decision by the Foundations General Directorate to return the orphanage to the patriarchate marks the first time that the Turkish government has returned a seized property to a minority group.

The patriarchate once had 90 churches in İstanbul and on the islands of Gökçeada (Imbros) and Bozcaada (Tenedos), the deeds of which belong to the foundations of each church. The Foundations General Directorate arbitrarily assumed the management of 24 of these foundations, together with their property and claimed to have the right to rent or transfer these properties — churches, schools, etc. — to third parties.

The orphanage, one of the largest wooden buildings in the world, was bought by the patriarchate in 1902 and its management was handed over to the Büyükada Greek Orphanage Foundation in 1903. The orphanage housed Greek orphans from 1903 until 1964, when it was transferred to nearby Heybeliada. The building on Büyükada was left abandoned and eventually suffered further damage from a fire in 1980.

The ownership status of the Greek orphanage has been the subject of much debate between the Greek Orthodox Patriarchate and the Foundations General Directorate, a powerful state institution that has been dealing with the fate of 2,235 properties owned by 147 foundations run by minorities.

Meanwhile, one area in which both the patriarchate and the international community would like to see progress is on the issue of the Greek Orthodox seminary on Heybeliada, which remains closed. The Halki Seminary was closed in 1971 based on a law that put religious and military training under state control.

The Ministry of Education had recommended that the seminary be put under its authority or that of the Higher Education Board (YÖK); however, the patriarchate has rejected both suggestions.

The patriarchate has also encountered serious problem in terms of how it has been perceived by the Turkish Republic. It has been described as a “threat” in national security documents, which were only recently updated to eliminate hostile wording as the Turkish government takes positive steps regarding democratic and religious freedoms.

Ankara is now expecting the Greek government to take some steps as well, for example, increasing the number of Turkish teachers in Celal Bayar High School in Komotini (Gümülcine) and allowing Fethiye Mosque in Athens to be restored to its original use. Ankara also points out that Athens is the only European capital without a mosque for its 200,000 Muslims and that the Greek government should implement its long overdue project of building a mosque in the city.

– The Turkish government now recognises us officially, says Bartholomew I

– Büyükada orphanage in Istanbul to be transferred to Greek Patriarchate

– Foreign Ministry asks for re-registration of Orthodox orphanage to patriarchate

– Istanbul Greek School down to just One Student

– Ecumenical Patriarch Bartholomew Feels «Crucufied» : Leader of 300 Million Orthodox Christians Talks to 60 Minutes About the Hardships He And His Followers Face in Turkey

– The Persecution of Christians in Turkey

– Why Are There So Few Christians in Turkey?

– The Mechanism of Catastrophe: The Turkish Pogrom of September 6-7, 1955, and the Destruction of the Greek Community in Istanbul