For every Turkish DITIB mosque in Germany build one Christian church in Turkey!

For every Turkish DITIB mosque in Germany build one Christian church in Turkey! 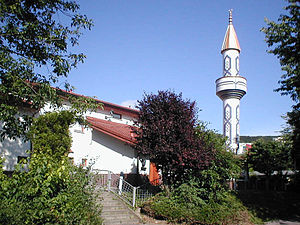 by the Society for Threatened Peoples

The Society for Threatened Peoples (GfbV) welcomes in the spirit of religious diversity and tolerance the construction of places of prayer for all faiths in our country. It is worth noting that the new mosque in Duisburg falls under the jurisdiction of the Islamist society DITIB, which with its 880 branches is an arm of the Turkish «Ministry of Religious Affairs» in Ankara. At the same time the Turkish administration persecutes and suppresses to the present day the Christian minorities.

«We call for the licence for one Christian church in Turkey for each of the many hundred DITIB mosques opened in Germany. As long as the DITIB propagates the anti-Kurdish and Kemalist ideology and takes no action for freedom of religion in Turkey it damages the reputation of Islam in Germany. Many European Moslems, among them Bosniaks, Sanjaks, Albanians and Roma have already turned their backs on the German DITIB mosques», said Tilman Zulch, General Secretary of the Society for Threatened Peoples. «Our human rights organisation draws attention to the fact that the Turkish state, which is still dominated by Kemalist ideology, is still suppressing and persecuting the indigenous Christians.»

Thanks to the policies of Kemal Ataturk and his Young Turk predecessors the proportion of Christians in the population has dropped inside the frontiers of today’s Turkey from 25% to 0.1%. From 1913 until 1922 there was genocide and from 1923 onwards ethnic cleansing took place (today played down as «population exchange») against Armenian, Aramaic Assyrian and Greek-Orthodox Christians, by pogroms and expulsion in the so-called «Istambul Kristallnacht» of 1955 and during the Cyprus crisis of 1974 and the discrimination and persecution of Christians since then.

The Catholic and Evangelical churches in Turkey have to the present day no legal status of their own, are therefore not independent public bodies having no legal capacity. Their religious services must for the most part be held in private houses. The building of new churches is as a rule not allowed except in tourist areas. The Orthodox Patriarch of more than 250 million Orthodox Christians throughout the world, who resides in Istanbul/Constantinople, is recognized in Turkey only as the head of about 3,000 Greek-Orthodox believers still remaining. Work and residence permits are generally not allowed for ministers of religion who have no Turkish citizenship. Although according to Para. 20 of the Lausanne Agreement non-Muslims have the right to hold property, religious minorities were until 2002 not allowed to acquire such properties. There have been countless cases of confiscation.

According to estimates of the Society for Threatened Peoples there are living in Turkey about 60,000 Apostolic, United or Evangelical Christians of Armenian nationality, some 3,000 Greek-Orthodox in Istanbul, 2,000 Syrian orthodox in Tur Abdin in the south-east of the country and about 3,000 in Greater Istanbul, 3,000 Syrian United and about 10,000 each of the Catholic and Evangelical Christians mainly of non-Turkish nationality.