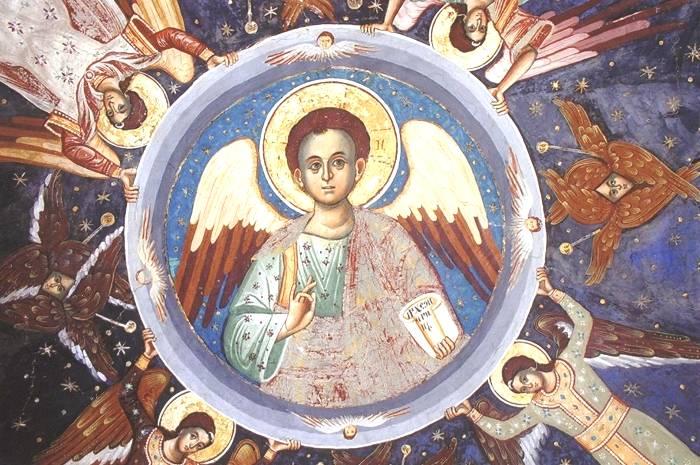 There is anguish when a woman is in labour, but all this is forgotten when the child is born, because a man has come into the world. Someone has come into the world to live, someone has entered into the realm of transitory life in order to grow into life eternal, and the birth of a child is always perceived as the beginning of life and as the beginning of eternity, once more incarnate, once more made real, visible, tangible, become part of human joy and human simplicity.

And yet, when we think of the nativity of Christ, the birth on earth of the Son of God, we see it in a quite different way. One of the ancient miniatures representing the birth of the Lord, shows us, apart from the habitual features of a cave, of the Mother Virgin, of Joseph, of the familiar animals, the manger standing by, deposited on an altar of sacrifice. And the child is lying on it as probably Isaac laid on the altar which Abraham had built in order to bring him as a blood offering to the Lord. Every one of us is born through temporary life into eternal life; the Eternal One, He who is life itself, is born into the world in order to enter into the realm of death. Eternal, Immortal God enters into the realm of man, not only the created world, but to enter the fallen world where death is the end of our earthly pilgrimage.

When we look at this image of the new-born child, lying on an altar of stones, ready for a sacrifice, brought as an offering, we can well ask ourselves, «Who is he who sacrifices this child?» – and we have an answer: it is the Father who gives us His Son that through His death we may live. We see here incarnate, clearly expressed, divine Love, and the measure of this love divine. The Only-Begotten Son is given unto death, delivered unto death for our sakes. Saint Paul ponders on the event, and he exclaims, «Hardly would anyone die for a friend, and Christ died for us while we still were enemies of God.»

God called us into existence, it was a one-sided act, not of His own powerful will, but of His immeasurable love. He called us into existence, that we may share with Him not only existence, but life, become partakers of all that He is; we are called, in the words of Saint Peter, to become partakers of divine nature; we are called to be brethren and sisters of Christ, sons and daughters of the Living God. He created us in an act of love and in this act of love, from the first, He gave Himself as an offering to us. And this offering is always a sacrifice. In order to make this offering meaningful, He gave us freedom, the freedom to accept love and to reject love, to love Him in response to His love, or discard His love and, through our deeds, through all our attitude to Him and to life, to proclaim to Him that His love is of no avail to us, that we do not want it, that it is in vain that he has loved us first, it is in vain that He had loved us so much as to give His Only Begotten Son for us.

God gives us the freedom, and we ask very often, «Why?!» – why have we not been made in such a way that, compelled by a blessed necessity, we would be unable to go wrong, that we should be made in such a way that we always and in all things would respond to the best. But is it not simply because where there is no freedom of love and rejection of love, there is no love? If we gravitated towards one another without any choice, it would be a law of nature, it would not be an act of free gift of oneself and of acceptance of the other. This freedom means love, at least the possibility of love, as it means also the possibility for us to reject God. But God in His freedom does not reject us. He remains faithful to the last, perfectly generous, heroically faithful.

And when the freedom of man is misused, He uses His freedom to come, and to reach out towards us at the very depth of ourselves, at the extreme distance which we reach when we die to love. He enters this very realm which is the realm where there is no love, where there is only dividedness, brokenness and separation, both from God and from one another and within ourselves, the inner brokenness and conflict between mind and heart, between conscience and action: Christ is born into the realm of death we have made through the misuse of freedom, because we have forgotten that freedom culminates, is fulfilled in that love which gives itself perfectly, which is forgetfulness of self, which is the laying down of one’s life for the other.

Let us then look at this crib not as we do when we are small children, seeing only an image of a child’s birth, miraculous, wonderful; let us look at it with an earnest and adult gaze, and see that this crib is an altar of sacrifice, that this cave where He was born is an image of that cave in which He will be deposited, a young man, killed for God’s sake after the agony of the Garden and the agony of the Cross, and let us ask ourselves, ‘Are we, each of us, a response to love revealed in such a way, revealed to such degree? «Will we find in ourselves a response, or shall we only say, «It was His choice, I have chosen against Him. He has chosen life for me, I have chosen death for Him».

This is the question which, and we now the day of Christmas sets before us have days and months of liturgical unfolding of the year, to grow through it towards a definitive and final answer when we will see love sacrificed on Calvary. We have got this liturgical year to follow step by step, in this year we will discover how the saints of God have responded, and at every step the question will stand before us: “And what about you, what about thee personally, what about us in our togetherness, what is our answer to love?” Amen