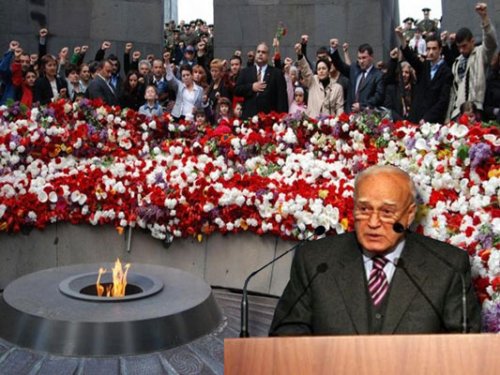 Greece and Armenia were “butchered” by Turkey in their past, the Greek president told his Armenian counterpart yesterday as he bemoaned a costly arms race with Ankara that helped create Greece’s vast debts.

“We were butchered by the same barbarian,” President Karolos Papoulias told his counterpart Serzh Sdargsyan who began a three-day visit.

He added that “many things have changed” since the early 20th century when the killings of Armenians and Black Sea Greeks occurred, and criticised a decades-old arms buildup that has cost Athens billions of euros.

“If we did not have the economic burden of arms balance we would not need the International Monetary Fund,” 81-year-old Papoulias said.

“We give the most money in Nato for armament, this is unfair for a people that is peaceful,” he added.

Athens nearly went bankrupt last year and had to be rescued by the European Union and the IMF when concerns over its massive budget deficits and a state debt of nearly 300bn euros ($400bn) dried up new loans.

Greece says thousands of ethnic Greeks living on the southern shores of the Black Sea for centuries were massacred in Turkey during strife that accompanied the fall of the Ottoman Empire and the creation of the modern Turkish state.

Armenia charges that up to 1.5mn of its kin were victims of genocide during World War I under the Ottoman Empire.

Ankara rejects the “genocide” charge, countering that 300,000 to 500,000 Armenians and at least as many Turks died in civil strife when Armenians rose up against their Ottoman rulers and sided with invading Russian forces.

– “We were butchered by the same barbarian”
http://ditord.com/2011/01/19/president_sargsyan_greece_cyprus/

– Karolos Papoulias: both Armenians and Greeks suffered at the hands of Turkey
http://sports.phantis.com/news/karolos-papoulias-both-armenians-and-greeks-suffered-hands-turkey