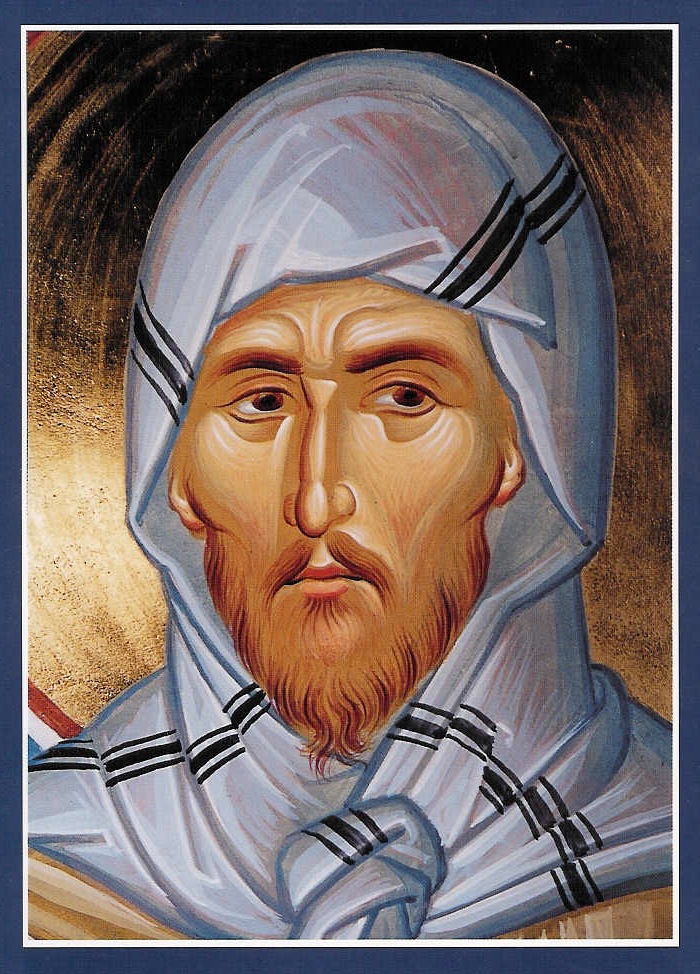 He is often called «The Harp of the Holy Spirit» for the sublimity of his writings. He was born in Nisibis of Mesopotamia about the year 306. He embraced the Christian faith while young and for this was driven from his home by his father, a pagan priest. He came under the care of St James of Nisibis (January 13), who was one of the bishops at the Council of Nicaea. He took up a strictly ascetical life, renouncing all possessions and denying himself all comforts. It is said that his eyes constantly flowed with tears: tears of compunction for his own sins, or tears of joy as he contemplated the wonders of God’s grace.

He was baptized at the age of twenty and withdrew to the desert, then settled in Edessa. Once, as he was walking to the city, a harlot approached him. Pretending to accept her proposition, he took her to the city’s public square and suggested that they lie together there, in plain view. Horrified, the woman rebuked him, saying ‘Have you no shame?’ The Saint answered, ‘Poor woman, you are afraid of being watched by other people; buy why are you not afraid of being seen by God, who sees everything and, on the last day, will judge all our actions and most secret thoughts?’ The woman repented and, with the Saint’s help, embarked upon a new life.

The Saint returned to the desert for a time, then to Nisibis to aid the Persian Christians, persecuted because they were seen as allies of the Romans. When Nisibis finally fell under Persian rule, St Ephraim and his spiritual father St James both settled in Edessa. At that time Edessa was troubled by the gnostic heretic Bardaisan, one of whose devices was to compose attractive hymns, which became popular and enticed many away from the truth. Taking up Bardaisan’s own weapons, St Ephraim composed a number of hymns, beautiful in word and melody, which poetically set forth the true Faith.

Hearing of the sanctity of St Basil the Great, St Ephraim traveled to Cappadocia to meet him. It is recorded that at their first meeting, St Basil greeted him: ‘Art thou the Ephraim who hath beautifully bended his neck and taken upon himself the yoke of the saving Word?’; to which St Ephraim replied, ‘I am Ephraim who hinder myself from traveling the way to heaven.’ After discoursing with the Syrian Saint for some time, St Basil cried out ‘O, if only I had thy sins!’ Basil then ordained St Ephraim to the diaconate. He would have ordained him a priest but St Ephraim, feeling unworthy, refused to be ordained, then and for the rest of his life.

The Saint returned to a life of solitude; but when a famine broke out in Edessa in 372, he came forth to rebuke the wealthy for failing to share their wealth with the poor. Some replied that they knew no one whom they could trust with their goods, so St Ephraim persuaded them to give their alms to him for distribution to the poor. A true deacon, he cared for the sick with his own hands. The following year, he reposed in peace.

St Ephraim was the first to use hymnody and song to express the teaching of the Church, and so might be called the Church’s first hymnographer. His works were probably an inspiration to St Romanos the Melodist, also a Syrian. He is said to have written more than three million lines of verse in Syriac, in addition to many homilies and treatises. Only a fraction of his work has been translated.

A beautiful selection of St Ephraim’s writings can be found in A Spiritual Psalter, a collection edited by St Theophan the Recluse, available in English.

The Prayer of St. Ephraim

O Lord and Master of my life, take from me the spirit of sloth, despair, lust of power, and idle talk.

But give rather the spirit of chastity, humility, patience, and love to Thy servant.

Yea, O Lord and King, grant me to see my own transgressions, and not to judge my brother, for blessed art Thou, unto ages of ages. Amen.

By a flood of tears you made the desert fertile,

and your longing for God brought forth fruits in abundance.

By the radiance of miracles you illumined the whole universe!

Our Father Ephraim, pray to Christ God to save our souls!

Ever anticipating the hour of Judgment,

Through your deeds you were a teacher by example;

therefore, universal Father, you rouse the slothful to repentance.