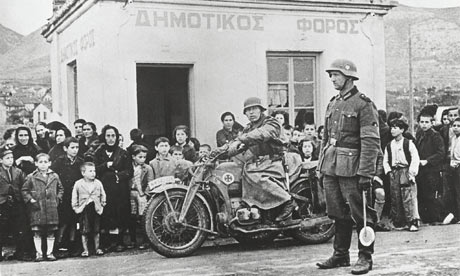 Greek civilians look on as the Germany army makes its way to Thessaloniki in April 1941. Photograph: Getty

A Nazi massacre remembered by Greeks as one of the worst atrocities of the second world war is threatening to plunge relations between Athens and Berlin to a new low amid rising criticism of Germany‘s failure to pay compensation.

The diplomatic dispute erupted last month after the Greek prime minister, George Papandreou, pledged his government would support the compensation claims of survivors and relatives of the massacre in the village of Distomo in June 1944, which left 218 people dead.

No previous administration has dared touch the case for fear of tensions with Germany. “This is about history. This is not anti-German,” the Socialist leader told the Observer. “It is about something that happened over 60 years ago, of honouring the memory of Greek citizens who were sacrificed for their country.”

At a time when Athens is fighting off bankruptcy with austerity measures – demanded by international creditors after the biggest bailout in history – Papandreou’s move is popular.

Under Nazi occupation from April 1941, more than 300,000 Greeks starved to death, 130,000 were executed in reprisals, and most of the Jewish community was sent to the gas chambers.

The tragedy at Distomo, near Delphi, is ingrained in the national consciousness. Children are taught that on 10 June 1944 some 218 men, women and children were slaughtered by a Waffen-SS unit in reprisal for an ambush on German troops outside the village. It occurred on the same day as the SS massacre at Oradour-sur-Glane in France.

Bodies were found dangling from trees by the road to the village when a Red Cross team visited days later. The veteran leftwinger Manolis Glezos, who in the first defiance against the Nazis tore down the swastika at the Acropolis in May 1941, said: “Quite rightly, and very belatedly, they are asking for €165m (£140m) in compensation.” The victims’ remains are now housed in an ossuary at the site. Even Papandreou’s critics have hailed his response – with the Greek state formally supporting a claim for compensation at the International Court of Justice – as statesmanlike.

At a time when Athens is so reliant on German largesse, the move has left many bewildered. Berlin is the biggest contributor to the €110bn EU and IMF-sponsored rescue package propping up the Greek economy. Resolution of the debt woes will depend greatly on German flexibility in granting extra time and financial aid to repay the loans. “I don’t have any understanding of the Greek decision,” the German foreign minister, Guido Westerwelle, said after Athens said it would back the reparation claim. “We are emphatically sticking to our position, and are confident that our legal opinion will prevail in court.”

Germany has long argued that it settled the issue with a bilateral agreement in March 1960 that gave the Greek state the equivalent of €59m in damages for loss of life, looting and “enforced” loans, including gold seized from the central bank. But the villagers have always claimed they were never compensated. Campaigners say that under the deal they were left to believe they could file individual claims at a later date. They took the battle to a Greek district court, which backed their claims in 1997, then to the supreme court, which ordered that German assets in Greece be seized (an act no Greek justice minister has been willing to carry out). Relatives of the victims then joined Italian plaintiffs also seeking damages. Last year, after an Italian tribunal upheld the Greek court’s ruling, Berlin retorted by taking the case to the international court.

Visiting Athens last week, Germany’s former foreign minister Joschka Fischer defended chancellor Angela Merkel (“which I never thought I would do”) before an audience of academics, diplomats and thinkers who found it hard to contain their frustration with Berlin.

Papandreou insists that, while dealing with the painful legacy of a historical event is one thing, meeting Berlin on matters of the economy is quite another. “We have excellent relations with Germany,” he said. “They are our friends.”