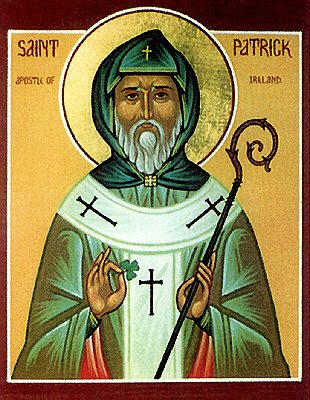 The great Apostle and Enlightener of Ireland, St. Patrick, was born to a noble Roman family of Gaul or Britain in the year 387. At the age of 16 he was carried off by Irish marauders and sold as a slave to an Irish chieftain, who put him in charge of his sheep. Six years later, after the prompting of an angel, the saint fled to Gaul where he placed himself under the spiritual direction of St. Germanus of Auxerre. For 18 years he prayed and struggled and studied and was often granted a vision of Irish children calling out to him: O holy youth, come back to Erin, and walk once more amongst us.”

Celestine I, the Bishop of Rome, commissioned St. Patrick to bring the people of Ireland into Christ’s one, true fold, and so during the summer of 433 he and his companions arrived in Ireland. They were immediately persecuted by the druids and other pagans, but the saint’s meekness and wonderworking, as well as his God-inspired ability to preach the Gospel, resulted in the conversion of many thousands. In particular, St. Patrick had to do spiritual battle with the arch-druid, Lochru, who, by the power of demons and through many incantations, tried to maintain his influence on the Irish. On one occasion Lochru, like Simon Magus, was able to levitate himself high into the air in a display of sorcery; but the moment St. Patrick knelt in prayer, Lochru fell to his death. This was the beginning of the end for paganism on that island. The Orthodox Faith was victorious on that Easter Sunday when the saint explained the doctrine of the Holy Trinity using a shamrock with its single stem and three leaves.

After receiving Holy Anointing, St. Patrick departed to the Lord on March 17, 493. As he lay in state for several days, a heavenly light shone around his body.