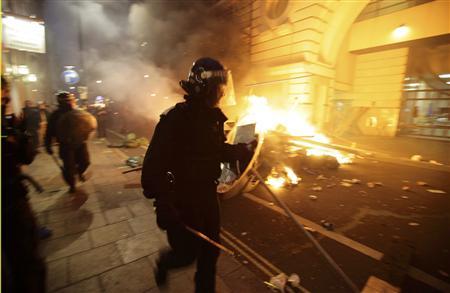 Black-clad, masked youths battled riot police and attacked banks and luxury stores in central London on Saturday, overshadowing a protest by more than a quarter of a million Britons against government spending cuts.

Police said they had arrested more than 200 people after anarchist groups splintered from the main union-led protest march and fought running skirmishes with riot police across the West End shopping and theatre district.

They threw flares and paint bombs and smashed their way into branches of HSBC and Santander banks. Banks are blamed by many Britons for a financial crisis that helped prompt the government to implement the deepest spending cuts in a generation.

Hooded figures climbed on to the roof of luxury food store Fortnum & Mason while other protesters attacked the exclusive Ritz hotel and started fires at several locations.

Late in the evening, 200-300 protesters occupied Trafalgar Square where they tried to damage an electronic clock counting down to the 2012 London Olympic Games before helmeted riot police moved in to disperse them amid a hail of bottles.

The clashes deflected attention from a peaceful rally to protest against public spending cuts, tax rises and pension reforms introduced by the Conservative-led coalition.

Union leaders and police said over 250,000 people joined the biggest demonstration in the capital since protests against war in Iraq in 2003.

The coalition, in power since last May, is pushing ahead with a tough debt reduction programme to virtually eliminate a budget deficit, running at about 10 percent of GDP, by 2015.

Prime Minister David Cameron’s coalition says it is cleaning up a mess left by the previous Labour government and that failure to act would expose Britain to market turmoil.

Police were pelted with paint and what they said were light bulbs filled with ammonia in scenes which mirrored violence late last year over higher student tuition fees.

London police commander Bob Broadhurst drew a distinction between the rally attended by health workers, teachers and families and the actions of a violent hardcore of around 500.

“It’s really just criminality. They’ve attacked buildings, broken windows, thrown paint at them and not been afraid to attack police officers trying to protect those buildings,” he told Reuters.

Many European countries have seen mass protests in recent months as governments slash public spending to try to help their economies to recover from the global financial crisis.

Unions and the opposition Labour Party say the government is bringing misery to millions of Britons with unemployment at its highest level since 1994. The spending cuts are expected to result in more than 300,000 job losses in the public sector.

Labour leader Ed Miliband told a rally n Hyde Park that the government was taking Britain back to what he said were the divisive politics of the 1980s when Conservative Margaret Thatcher was prime minister.

“There is a need for difficult choices, and some cuts,” Miliband said. “But, this government is going too far and too fast and destroying the fabric of our communities.”