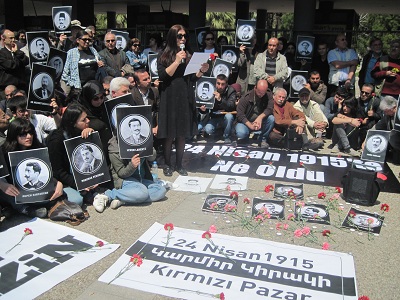 (AINA) — Just few years ago only a handful of people in Istanbul rallied publicly on April 24 to remember thegenocide perpetrated during the Ottoman reign against Armenians, Assyrians and Greeks. This year’s commemorations took place in five other cities, Ankara, Bodrum, Izmir, Bursa, and Diyarbakir. At Izmir, Assyrian victims were commemorated, too. These protests are highly courageous considering the machinery of denial still at work in official Turkey. An increasing number of Turkish intellectuals refuse to accept the denial policy of their government.

One of the initiatives, “Say Stop to Racism and Nationalism!” gathered in Istanbul, Diyarbakir, Bodrum and Izmir. The slogan of the actions was “This pain belongs to all of us”.

In Istanbul the branch of Turkey’s Human Rights Association (IHD) organized a protest to commemorate the beginning of the genocide of 1915, in front of the Ibrahim Pasha Palace, which is now hosting the Museum of Islamic Art. The IHD slogan was “Genocide is a crime against humanity”.

Reading a press statement, lawyer Eren Keskin, a member of the IHD’s executive board, said:

This is the place where prominent members of the Armenian community were taken from their home and gathered on April 24, 1915, before being sent to inner parts of Anatolia and eventually, death,” she said.
For state authorities and the General Staff, those people were Armenian gang members; yet, they were intellectuals representing the heart and mind of the society. They were poets, writers, MPs, scientists, doctors…

Their detention were carefully planned and silently executed. They were brought to Ibrahim Pasha Palace with fire department’s vehicles to not arouse interest. Adam Andonian, who managed to survive the debacle, recalled the events in detail. Among the 220 arrested, 70 were sent to Ayas and 150 to Çankiri. 58 of the former and 81 of the latter were murdered. Furthermore, the Armenian presence in Anatolia was brutally ended by the hands of the ruling Committee of Union and Progress (ittihat ve terakki). During this period, other non-Muslim Anatolian people of Anatolia [i.e. Greeks, Assyrians, Yezidi etc.] shared the same faith [fate]. 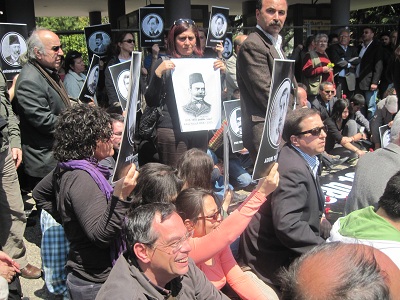 The Izmir Assyrian Platform was an organizer of the Izmir rally. In a statement issued by Zeynep Tozduman on behalf of the Assyrian Platform, she writes: “Basmane neighborhood was once a lovely green place of beauty and densely inhabited by the Armenian people in 1915″. Prior 1915, Greek, Armenian and Turk people lived peacefully together here and conducted business…These days, as a result of single race standardization and of Pan Islamism, no Greeks and Armenians live in the district of Basname anymore. Izmir is facing its history after 97 years! The 24th of April is for the first time commemorated in Izmir. 220 Armenian intellectuals, and likely Assyrians among them as well, are mourned.”

“The Union and Progress committee of 1915 is still active in today’s Turkey– in form of armies of imams!”, she adds.

In his annual statement on April 24th, US President Barack Obama called the killings nearly a century ago a “horrific” slaughter, but once again avoided to refer to them as “genocide” and failed to mention other Christian population groups — Assyrians and Greeks — who were also victims. Mr. Obama said:

We solemnly remember the horrific events that took place ninety-six years ago, resulting in one of the worst atrocities of the 20th century. In 1915, 1.5 million Armenians were massacred or marched to their death in the final days of the Ottoman Empire.I have consistently stated my own view of what occurred in 1915, and my view of that history has not changed. A full, frank, and just acknowledgement of the facts is in all our interests….As we commemorate the Meds Yeghern [Armenian: Great Massacre] and pay tribute to the memories of those who perished, we also recommit ourselves to ensuring that devastating…

As expected, even this statement triggered an official protest from Turkey. Turkish Foreign Minister Davutoglu criticized Obama, stating: “President Obama’s statement issued on April 23, 2011, takes a one-sided approach, reflecting Armenian views, regarding the dispute between Turks and Armenians on the painful part of their common history. This statement distorts the historical facts. Therefore, we find it very problematic and deeply regret it.”

© 2011, Assyrian International News Agency.  All Rights Reserved. Terms of Use.

– Before The Silence : Archival News Reports Of The Christian Holocaust That Begs To Be Remembered

– The Genocide of Ottoman Greeks, 1914-1923 by the Rutgers Center for the Study of Genocide and Human Rights
http://cghr.rutgers.edu/projects/greek_genocide.html– Before the Silence : The Greek Genocide in contemporary press reports
http://www.umd.umich.edu/dept/armenian/bts/