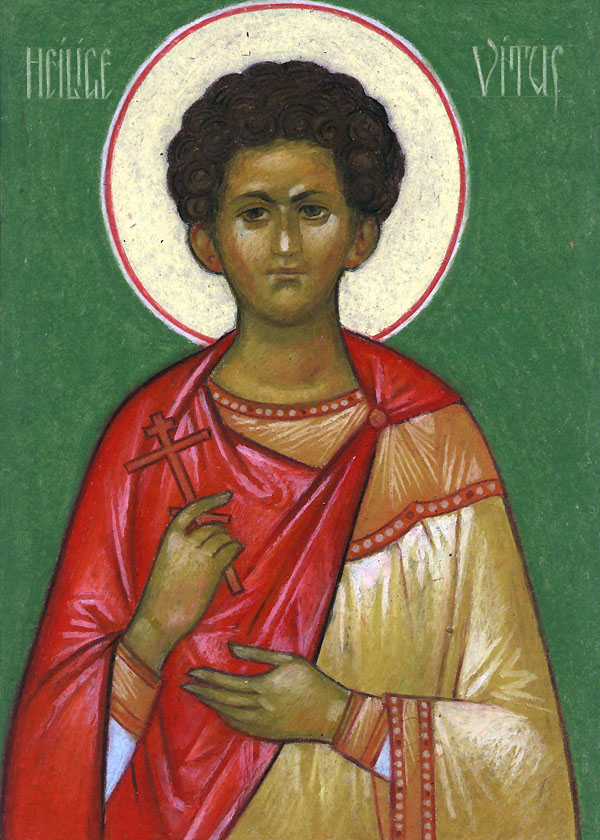 The Holy Martyrs Vitus, Modestus, and Crescentia suffered for Christ during the reign of Emperor Diocletian (284-305).

St Vitus was the son of an illustrious Sicilian dignitary, the pagan Gelas. Gelas tried to turn his son from Christianity, but failed. Paternal love then turned to hatred, and he decided to kill Vitus.

In order to save the boy, his tutor St Modestus and his governess St Crescentia, who were Christians, secretly took him from his parental home. They saw a boat at the river, and an angel entered the boat with them. They reached the Italian district of Lucanium, where the saints lived quietly, hiding from those who would persecute them. The holy youth continued to heal the sick and convert pagans to Christianity. His fame soon spread throughout the region.

Sts Vitus and Modestus went to present themselves before Diocletian, and were thrown into prison. Then the Lord Jesus Christ appeared to the prisoners, strengthening them for their contest. He helped them, and the fetters fell from their hands.

Ascribing the miracle to magic, Diocletian ordered that St Vitus be thrown into a cauldron of boiling oil. The saint stood in it as if in cool water, and remained unharmed. Then a fierce lion was set loose. The young man made the Sign of the Cross, and the beast laid at his feet and began to lick them. They tied the holy martyrs to pillars and began to scrape them with iron claws.

St Crescentia came out of the crowd of spectators, confessed herself a Christian and reproached the emperor for his cruelty. He also sentenced her to torture.

St Vitus called out to God, «O God, save us by Thy power and deliver us.» Then an earthquake struck, and many pagans perished beneath the collapsed buildings. Diocletian fled to his chambers in fear. An angel released the martyrs from the pillars and took them to Lucanium.

St Vitus prayed that God would accept their souls in peace and not deprive those who kept their memory of His benefaction. A Voice came from Heaven, «Thy prayer is heard.» Then the saints joyfully surrendered their souls to God.

The holy martyrs Vitus, Modestus and Crescentia suffered for Christ in the year 303. These saints are also commemorated on June 15.

The relics of Saint Vitus were transferred to Prague. The Holy Prince Vyacheslav (Wenceslaus) of the Czechs (September 28) built a church in honor of St Vitus, in which he was afterwards buried.