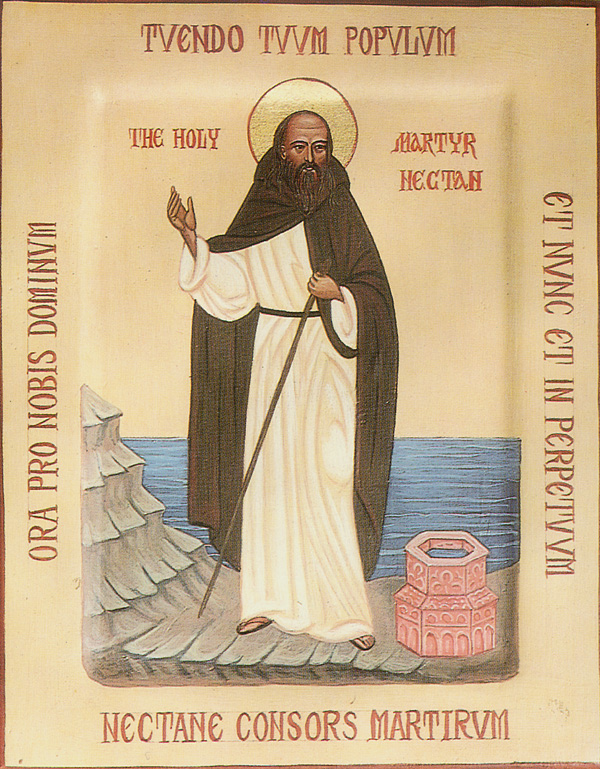 St Nectan was born in Wales and lived in the sixth century, but we know few details about his life. He was the oldest of the twenty-four children of St Brychan of Brecknock (April 6). While he was still living in Wales, God inspired him to imitate the example of St Anthony (January 17) and other ascetics, and to embrace the monastic life.

Seeking greater solitude, St Nectan and his companions left Wales, intending to settle wherever their boat happened to land. Divine providence brought them to the northern coast of Devonshire at Hartland, where they lived for several years in a dense forest. The saint’s family would visit him there on the last day of the year. Later, he relocated to a remote valley with a spring.

Once, St Nectan found a stray pig and returned it to its owner. In gratitude, the swineherd gave St Nectan two cows. The saint accepted the gift, but the cows were soon stolen by two robbers. St Nectan found the thieves who took the animals, and tried to preach to them about Christ. They became angry and cut off his head. Then the saint picked up his head and carried it for half a mile, laying it down near the spring by his cell. Seeing this, the man who killed St Nectan went out of his mind, but the other thief buried him. From that time, miracles began to take place at St Nectan’s tomb.

In 937 St Nectan appeared on the eve of the Battle of Brunanburgh to a young man from Hartland who was in a tent near King Athelstan’s pavilion. Suddenly, he felt himself afflicted with the plague which was then destroying the English army. The young man wept and called upon God and St Nectan to help him. His cries were so loud that he woke the king and others around him.

St Nectan came to the young man just after midnight and touched the afflicted area of his body, healing him. In the morning, he was brought before the king and admitted that it was he who had disturbed Athelstan’s sleep. The king asked gently why he had been crying out during the night.

The young man explained that he felt himself stricken with the plague, and was afraid that he would die. Therefore, he entreated God and St Nectan to help him, and his prayer was answered.

Athelstan asked for more information about the life and martyrdom of St Nectan, which the young man provided. He also urged the king to turn to St Nectan with faith, promising that he would be victorious in battle if he did so.

The king promised to honor God and St Nectan, and so his faith was rewarded. Not only did he win the battle, but the plague disappeared and his soldiers recovered. The first time that King Athelstan visited Hartland in Devonshire, he donated property to the saint’s church. For the rest of his life, the king placed great confidence in the intercession of St Nectan.

St Nectan is the patron of Hartland, Devonshire. The fullest surviving Life dates from the twelfth century (See Vol. 5 of THE SAINTS OF CORNWALL by G. H. Doble for an English translation).

There is an Orthodox house chapel (Russian diocese of Sourozh) dedicated to St Simeon and St Anna at Combe Martin, N. Devon where St Nectan is venerated.