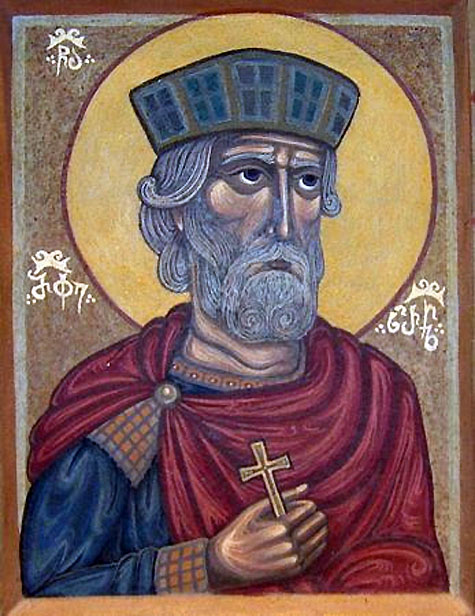 The Holy Martyr Archil II, King of Georgia belonged to the dynasty of the Chosroidoi, and he was a direct descendant of the holy emperor St Mirian (+ 342).

During the reign of Archil II, Georgia was subjected to a devastating invasion by Murvana-Kru («the Wild»), so called by the Georgian people for his inexorable cruelty. The position of the Georgian people was desperate, and the emperor Archil II, together with his brother Myro, the ruler of Western Georgia, tearfully implored the intercession of the Most Holy Theotokos, and She showed forth Her mercy. Read more…

At a battle by the Rivers Abasha and Tskhenis-Tskhali the Georgian forces miraculously gained the victory over the significantly superior forces of Murvana-Kru.

After this victory the emperor Archil II was occupied with the restoration of the Georgian kingdom. He rebuilt the city of Nukhpatis, rebuilt ruined churches in Mtskheta and furthered the acceptance of Christianity by many of the mountain tribes. But soon Georgia suffered a new Arab invasion with the sudden appearance of Dzhidzhum-Asim (Jijum-Asim). Having paid a tribute to the Arabs, the emperor did not expect this invasion. In order to deliver the land from new devastation and avert the intrusion of Islam upon it, he deemed it beneficial to go himself to Dzhizhum-Asim, and subject formerly independent Georgia to the Arabs, and ask for peace. Placing all his hope on the mercy of God and ready to offer up his soul for his holy Faith and for his nation, St Archil went to the camp of the Arabs. Dzhidzhum-Asim received him hospitably and promised his suzerainty, but insisted on acceptance of Mohammedanism. As the «Georgian Chronicle» relates, the holy emperor Archil calmly said, «It will not be, that I should forsake Christ, the True God, Who for our salvation took upon Himself human flesh. I know, if I obey you, then I shall die a spiritual death and shall suffer eternally. If for my firmness you put me to death, I shall then rise as did my Lord, and I shall go to Him».

Hearing these words, Dzhidzhum-Asim gave orders to seize the confessor and take him off to prison. But neither tortures nor promises could make the eighty-year-old emperor Archil apostasize.

On March 20, 744 the holy emperor Archil was beheaded. The body of the martyr was secretly taken by Georgian Christians to the locale Ertso and buried in Kakhetia, in the Notkor church built by the holy emperor himself.