St. Alban the Protomartyr of Britain

St. Alban the Protomartyr of Britain 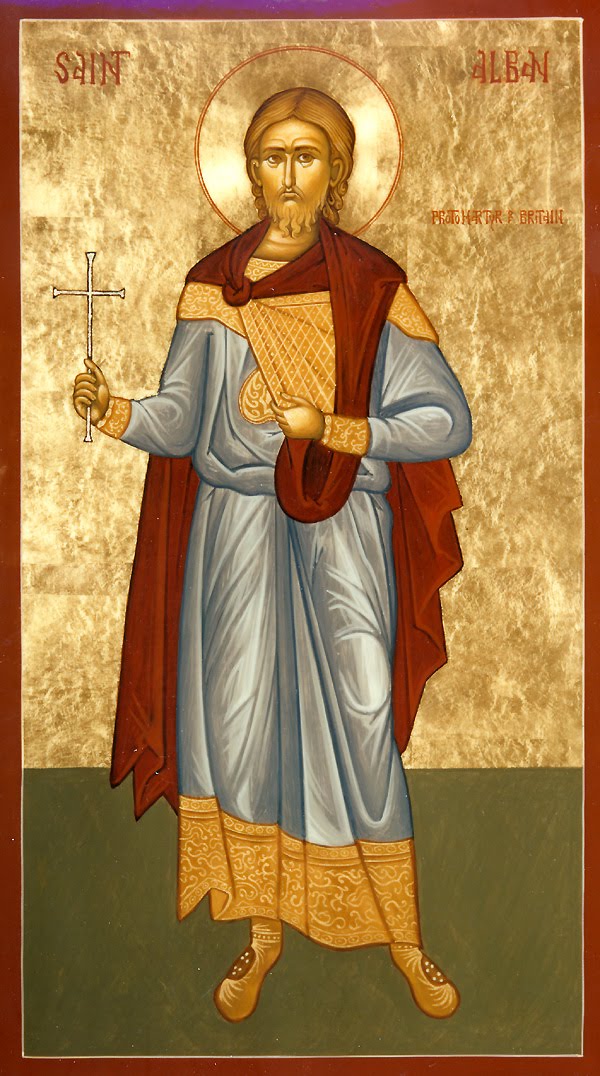 “Saint Alban (or Albanus), the protomartyr of Britain, was a Roman citizen who lived at Verulamium (modern St Albans), a few miles northwest of London, during a time of persecution. Nothing is known about his family or his occupation.

The chief magistrate of the city had orders to arrest all Christian clergy. One of them, a priest named Amphibalus, fled to Alban’s home in order to hide from the soldiers who wished to kill him. Alban was impressed by the priest’s constant prayer and vigil, and so he questioned Amphibalus about his beliefs. As a result, Alban came to believe in Christ and asked to be baptized.

Eventually, Amphibalus was forced to move on, and Alban changed clothes with him so that he could get away. The soldiers heard there was a priest hiding in Alban’s house, so they came to search it. Seeing Alban dressed in the priest’s clothes, they arrested him and brought him before the judge.

The magistrate was offering sacrifice to idols when St Alban appeared before him. After questioning him, he discovered how Alban and the priest had switched clothes. Furious because Alban had allowed a fugitive to escape, the magistrate threatened him with death unless he returned to paganism and revealed where Amphibalus had gone. St Alban replied, “I am also a Christian, and I worship the true God.”

After having the saint beaten and tortured, the magistrate threatened him with execution. St Alban rejoiced and glorified God. The magistrate ordered the soldiers to take St Alban to the Holmhurst Hill to be beheaded. When they came to the river Ver, they saw that the bridge was crowded with people who had come to witness Alban’s martyrdom. Since they could not proceed because of the multitude of people, St Alban p rayed and made the Sign of the Cross over the river. At once, the waters parted so that they were able to cross over to the other side.

The executioner was so astonished by the miracle that he threw down his sword and refused to behead the saint. He was arrested, and another man was found to behead them both. There is a tradition that St Alban became thirsty while climbing the hill and asked for water. A small spring gushed forth near the top of the hill, and he was able to drink from it. Pilgrims used to come and drink from St Alban’s well, but it is now dry.

The date of St Alban’s martyrdom is uncertain, but it is believed that it took place during the reign of Decius (ca. 251) or Valerian (ca. 257). The eighteenth century Turin manuscript (which may be based on a fifth century source) suggests that St Alban may have been executed as early as 209, when the emperor Septimus Severus and his two sons were in Britain. The name of the executioner who was converted has not been preserved. The priest Amphibalus was ultimately caught and put to death at a place called Redbourn, four miles from Verulamium.

When people began to cry out against the magistrate, he put an end to the persecution. In later years a cathedral was built on the site of the martyrdom, and the relics of St Alban, the priest Amphibalus, and perhaps even the executioner were enshrined within. St Bede (May 27) tells us that miracles frequently took place at St Alban’s tomb. When the Danes invaded England in 860, the relics were removed for safekeeping, then later returned.

A new chapel and shrine were built for the relics in the early fourteenth century. Two hundred years later, during the dissolution of the monasteries under Henry VIII, the marble shrine was destroyed. Much later, the fragments of the s hrine were reassembled on its former site. What happened to the relics is uncertain, but it is probable that they were either destroyed or buried in an unmarked spot.

Although St Alban is sometimes depicted in military garb, there is no evidence that he was a soldier. After all, he was living in a private home when he was arrested, and not in a barracks. There is a medieval painting in the south aisle beside the Choir in the Abbey which depicts St Alban with red hair. A medieval seal, now in the Durham Cathedral Chapter Library, shows him with a thick beard. He is stocky, with a high, round and balding forehead, and a cloak covers his left side and right shoulder.” 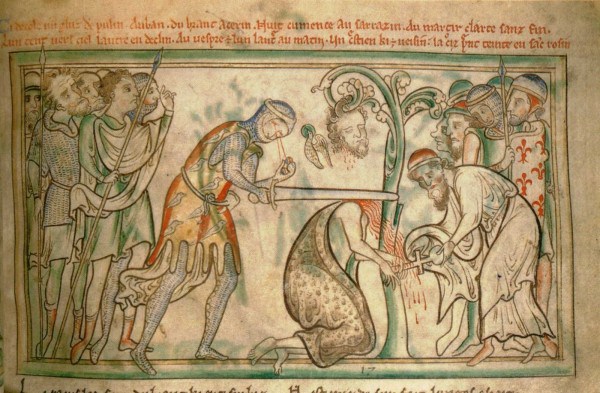 Relics of the Saint (Wikipedia)

“In June 2002 a scapula (shoulder blade), believed to be a relic of St Alban, was presented to St Albans Cathedral and placed inside the saint’s restored 13th century shrine. The bone was given by the Church of St. Pantaleon in Cologne, Germany. St Pantaleon’s, like St Albans Cathedral a former Benedictine abbey church that had a shrine dedicated to St Alban, has possessed remains believed to be those of St Alban since the 10th century. It is entirely possible that further relics were acquired by the church in the 16th century at the time of the Dissolution of the Monasteries in England, when many such relics were smuggled abroad to prevent their destruction. St Albans Abbey was dissolved in 1539.

The largest relic of St Alban in England is the thigh of the protomartyr preserved at St Michael’s Benedictine Abbey, Farnborough, Hampshire, which was removed from the St Pantaleon’s reliquary in the 1950s.”
(http://en.wikipedia.org/wiki/Saint_Alban) 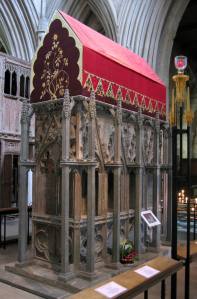 Shrine of St. Alban in his cathedral (St. Albans, England)
On “Lord, I have cried …”, 6 stichera: in Tone I: Spec. Mel.: “O most lauded martyrs …”
Arise, ye Christian peoples of Albion, leap for joy and join chorus, lifting your voices in sacred hymnody, and let us praise Alban the most laudable, who in accordance with his name was washed whiter than snow by the blood of his martyrdom; for, confessing Christ before the ungodly tyrant, he received a heavenly crown from his Master on high.
O Verulamium, once armed with pagan might, beyond thy ruins rose a new and Christian city, in the place where the holy Alban suffered, and where the shrine of his precious relics was established, to which the faithful have recourse, even in our times; for the grace divine which emboldened him to lay down his life for his Lord doth constantly shine forth upon us who venerate his glorious martyrdom.
O heathen worshipers of false deities, who in your madness venerate the elemental forces of nature as divine, ye are confounded and put to shame by the courageous witness of Alban most wise, who, brought before the pitiless tyrant, steadfastly refused to offer sacrifice to inanimate things, bravely proclaiming with the Psalmist that the gods of the pagans are demons. Wherefore, having witnessed to Christ on earth, he hath inherited His kingdom in the heavens.

St. Alban the Protomartyr of Britain
Troparion, in Tone III
With faith, piety and devotion let us hasten to the sacred shrine of the wondrous martyr Alban, the first in Britain to shed his blood for Christ the Lord, for Whom he willingly laid down his life; and let us pray that through his supplications our souls may find mercy and salvation.
Kontakion, in Tone II: Spec. Mel.: “Seeking the highest …”
Imbued with courage and bravery from on high, the glorious martyr Alban stood undaunted before the tyrant and boldly confessed Christ as the only God of all; and he utterly refused to offer sacrifice to false deities. Wherefore, having laid down his life for the Lord, he maketh earnest entreaty in behalf of our souls.
Ikos
Heeding well the words of the Saviour to His disciples, thou didst not fear him who could slay thy body, for he was unable to kill thy soul. For this cause, what was taught thee in the darkness by the Christian priest, whose life thou didst save, thou didst proclaim in the light; and what thine ear took in of his pure teaching, thou didst declare openly before the tribunal. Wherefore, having laid down thy life for the Lord, thou makest earnest entreaty in behalf of our souls.
For the full service of St. Alban in English, see:http://orthodoxengland.org.uk/servalb.htm.
Through the prayers of our Holy Fathers, Lord Jesus Christ our God, have mercy on us and save
Source: http://full-of-grace-and-truth.blogspot.com/2010/06/st-alban-protomartyr-of-britain.html
(http://ocafs.oca.org/FeastSaintsViewer.asp?SID=4&ID=1&FSID=101785)
(http://oodegr.com/english/biographies/arxaioi/Protomartyr_Alban.htm)
(http://ocafs.oca.org/FeastSaintsViewer.asp?SID=4&ID=1&FSID=101785)
(http://upload.wikimedia.org.jpg)
(http://upload.wikimedia.org/wikipedia/commons/a/a9/Shrine-of-st-alban.jpg)
(http://www.allmercifulsavior.com/icons/Icons-Alban.htm)