Saint Leo the Great on the Apostles Fast and its Significance

Saint Leo the Great on the Apostles Fast and its Significance 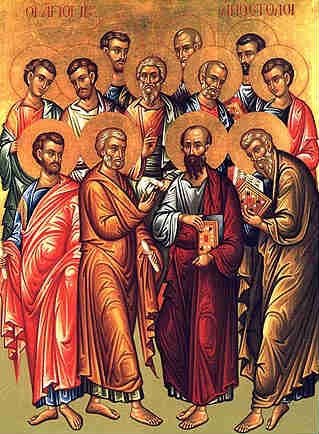 I. Since the Apostles’ Day Till Now Self-Restraint is the Best Defence Against the Devil’s Assaults.

Today’s festival, dearly-beloved, hallowed by the descent of the Holy Spirit, is followed, as you know by a solemn fast, which being a salutary institution for the healing of soul and body, we must keep with devout observance. For when the Apostles had been filled with the promised power, and the Spirit of Truth had entered their hearts,

we doubt not that among the other mysteries of heavenly doctrine this discipline of spiritual self-restraint was first thought of at the prompting of the Paraclete in order that minds sanctified by fasting might be fitter for the chrism to be bestowed on them. The disciples of Christ had the protection of the Almighty aid, and the chiefs of the infant Church were guarded by the whole Godhead of the Father and the Son through the presence of the Holy Spirit. But against the threatened attacks of persecutors, against the terrifying shouts of the ungodly, they could not fight with bodily strength or pampered flesh, since that which delights the outer does most harm to the inner man, and the more one’s fleshly substance is kept in subjection, the more purified is the reasoning soul.

II. The Templer is Foiled in Attacks Upon Those Who Have Learnt These Tactics.

And so those teachers, who have instructed all the Church’s sons by their examples and their traditions, began the rudiments of the Christian warfare with holy fasts, that, having to fight against spiritual wickednesses, they might take the armour of abstinence, wherewith to slay the incentives to vice. For invisible foes and incorporeal enemies will have no strength against us, if we be not entangled in any lusts of the flesh. The desire to hurt us is indeed ever active in the tempter, but he will be disarmed and powerless, if he find no vantage around within us from which to attack us. But who, encompassed with this frail flesh, and placed in this body of death, even one who has made much decided progress, can be so sure of his safety now, as to believe himself free from the peril of all allurements? Although Divine Grace gives daily victory to His saints, yet He does not remove the occasion for fighting, because this very fact is part of our Protector’s Mercy, Who has always designed that something should remain for our ever-changing nature to win, lest it should boast itself on the ending of the battle.

III. And So This Fast Comes Very Opportunely After the Feast of Whitsuntide.

Therefore, after the days of holy gladness, which we have devoted to the honour of the Lord rising from the dead and then ascending into heaven, and after receiving the gift of the Holy Spirit, a fast is ordained as a wholesome and needful practice, so that, if perchance through neglect or disorder even amid the joys of the festival any undue licence has broken out, it may be corrected by the remedy of strict abstinence, which must be the more scrupulously carried out in order that what was on this day Divinely bestowed on the Church may abide in us. For being made the Temple of the Holy Spirit, and watered with a greater supply than ever of the Divine Stream, we ought not to be conquered by any lusts nor held in possession by any vices in order that the habitation of Divine power may be stained with no pollution.

IV. And by Proper Use of It We Shall Win God’s Favour.

And this assuredly it is possible for all to obtain, God helping and guiding us, if by the purification of fasting and by merciful liberality, we take pains to be set free from the filth of sins, and to be rich in the fruits of love. For whatever is spent in feeling the poor, in healing the sick, in ransoming prisoners, or in any other deeds of piety, is not lessened but increased, nor will that ever be lost in the sight of God which the loving-kindness of the faithful has expended, seeing that whatever a man gives in relief, he lays up for his own reward. For «blessed are the merciful, since God shall have mercy on them;» nor wilt shortcomings be remembered, where the presence of true religion has been attested. On Wednesday and Friday, therefore, let us fast, and on Saturday let us keep vigil in the presence of the most blessed Apostle Peter, by whose prayers we surely trust to be set free both from spiritual foes and bodily enemies; through our Lord Jesus Christ, who with the Father and the Holy Ghost, lives and reigns for ever and ever. Amen.