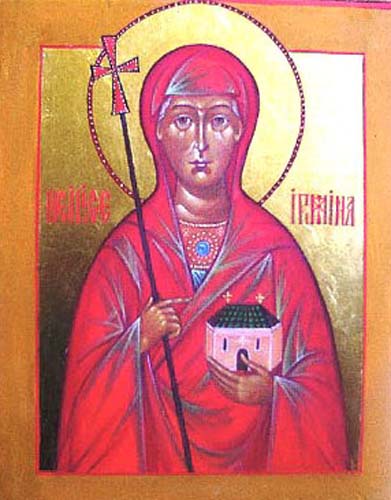 By tradition it is known that the princess Saint Irmina, daughter of Dagobert II, was to marry Count Herman. All the preparations had been made when an officer of the court, who was in love with Irmina, persuaded Herman to a cliff where he threw himself and the betrothed over. After this Irmina asked that she be allowed to become a nun. Dagobert restored a convent at Trier for his daughter. read more…

Irmina was a devotee of St. Willibrord, and provided the manor where the monastery Echternach was founded in AD 698. The gift came from St. Willibrord’s miraculous staying of an epidemic striking the nunnery at Trier. This unfortunately is the extent of knowledge about the saint, besides her death in AD 710. 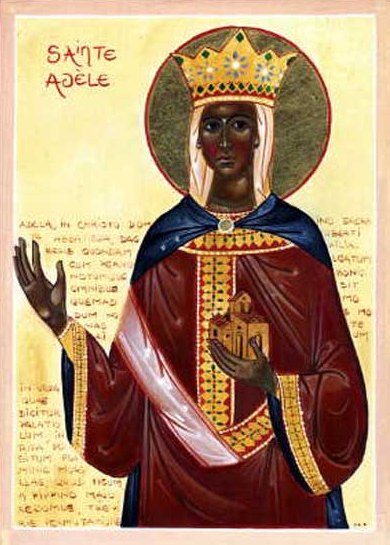 Saint Adela, sister of Irmina and daughter of Dagobert II, became a nun after the death of her husband Alberic. She is probably the same as Adula who in 691-2 was known to be raising her son, the future father of St. Gregory of Utrecht. She founded a monastery at Pfalzel, near Trier, and governed it as Abbess for many years.

Adela seems to be a disciple of St. Boniface, as she is the recipient of a letter in Boniface’s possession from Abbess Aelffled to Adela. She died in AD 734.

To honor the martyrs and duty celebrate their festivals, we must learn their spirit, and study to imitate them according to the circumstances of our state. We must, like them, resist evil unto blood, must subdue our passions, suffer afflictions with patience, and bear with others without murmuring or complaining. Many practice voluntary austerities ties cheerfully, only because they are of their own choice. But true patience requires, in the first place, that we bear all afflictions and contradictions from whatever quarter they come; and in this consists true

virtue. Though we pray for heaven, our prayers will not avail, unless we make use of the means which God sends to bring us thither. The cross is the ladder by which we must ascend.