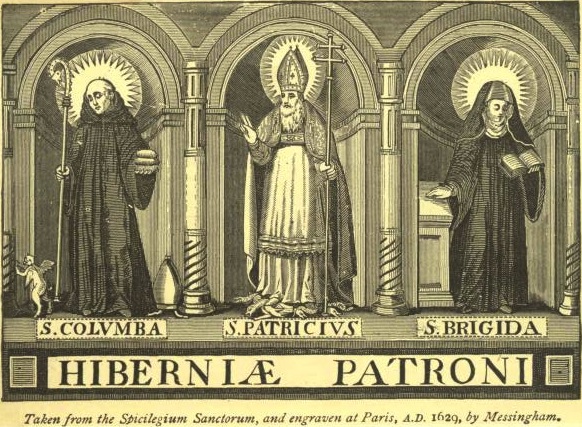 But Patrick, having now become a monk, forgetting all things that were past, applied to the future, and, as if little accounting his former conversation, hastened to the height of perfection. For by incredible abstinence, by his lengthened fasts, and by the exercise of his other virtues, he afflicted himself, and continually bore in his heart and on his body the mortification of that cross which his habit displayed. But the most high Pastor, who intended to raise him to the head of the holy Church, that he might learn to think humbly of himself, to walk with the lowly, and to bear with the weak, permitting him to feel his own inferiority; so that the more deeply he was fixed on the foundation of true humility, the more firmly he might stand in the height of perfection. For a desire of eating meat came upon him, until, being ensnared and carried away by his desire, he obtained swine’s flesh, and concealed it in a certain vessel, thinking rightly that he might thus satisfy his appetite privily, which should he openly do he would become to his brethren a stone of offence and a stumbling-block of reproach. And he had not long quitted the place when, lo! one stood before him having eyes before and eyes behind, whom when Patrick beheld, having his eyes so wonderfully, even so monstrously, placed, he marvelled who he was, and what meant his eyes fixed before and fixed behind, did earnestly ask; and he answered, I am the servant of God. With the eyes fixed in my forehead I behold the things that are open to view, and with the eyes that are fixed in the hinder part of my head I behold a monk hiding flesh-meat in a vessel, that he may satisfy his appetite privily. This he said, and immediately disappeared. But Patrick, striking his breast with many strokes, cast himself to the earth, and watered it with such a shower of tears as if he had been guilty of all crimes; and while he thus lay on the ground, mourning and weeping, the angel Victor, so often before mentioned, appeared to him in his wonted form, saying, Arise, let thine heart be comforted; for the Lord hath put away thine offence, and henceforward avoid backsliding.

Then Saint Patrick, rising from the earth, utterly renounced and abjured the eating of flesh-meat, even through the rest of his life; and he humbly besought the Lord that He would manifest unto him His pardon by some evident sign. Then the angel bade Patrick to bring forth the hidden meats, and put them into water; and he did as the angel bade; and the fleshmeats, being plunged into the water and taken thereout, immediately became fishes. This miracle did Saint Patrick often relate to his disciples, that they might restrain the desire of their appetites. But many of the Irish, wrongfully understanding this miracle, are wont, on Saint Patrick’s Day, which always falls in the time of Lent, to plunge flesh-meats into water, when plunged in to take out, when taken out to dress, when dressed to eat, and call them fishes of Saint Patrick. But hereby every religious man will learn to restrain his appetite, and not to eat meat at forbidden seasons, little regarding what ignorant and foolish men are wont to do.

The Life and Acts of Saint Patrick by Jocelin, Chapter XXIII, Of the Flesh-meat changed into Fishes.