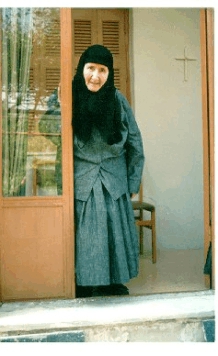 Once when I was there where I was, some foreign missionary came and said to me, “You may be a good woman, but you’re not a good Christian.”

“Because you have been here so long and you only go about speaking English. What local languages have you learned?»

I said to him, “I haven’t managed to learn any of the local languages, because I travel a great deal from place to place. As soon as I learn one dialect, they start speaking another. I’ve only learned ‘Good morning’ and ‘Good evening.’ Nothing else.”

“Bah, you’re no Christian. How can you evangelize? All the Catholics and Protestants learn all the local dialects in order to . . .”

Then I said, “Lord, give me an answer for him.” I asked it with all my heart, and then I said, “Ah. I forgot to tell you. I know five languages.”

“Really? What are these five?»

“The first is the smile; the second is tears. The third is to touch. The fourth is prayer, and the fifth is love. With these five languages I go all around the world.”

Then he stopped and said, “Just a minute. Say that again so…