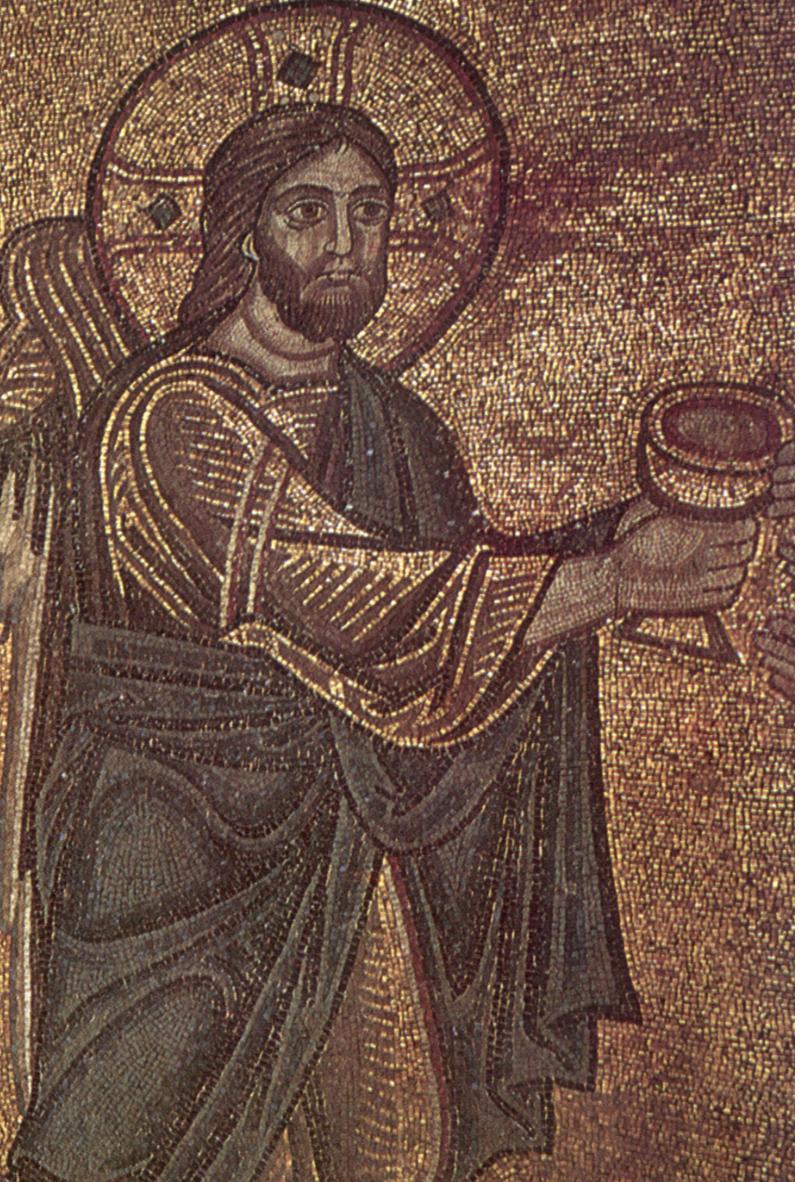 A priest, Fr Theodoros, was called to give the Holy Communion to two people who were near death. One was a rich man, hardened and stingy and the other was a virtuous widow, who managed to bring up eight children in circumstances of acute poverty and hard work, in all honesty and prudence!!

Fr Theodoros was accompanied by deacon, Fr Lavrentios. The sexton was leading the way, followed by Fr Lavrentios and Fr Theodoros, who were walking side by side. The priest was without his cap, carrying the Holy Grail, and was having the Aera on his shoulders, as it was the custom those days. They first visited the place of the rich man. He did not even want to hear about taking the Holy Communion! He was only shouting:

The priest tried as much as possible to talk sense to him but he would have none of this; he did not want to take the Holy Communion.

Then the deacon asked the priest:

«Father, could you give me the Holy Grail so that I can go and offer Holy Communion to Mrs. Maria while you can talk it over with the sick man until I return? If you manage to convince him, he can take the Holy Communion afterwards.»

«Yes, my child, go with my blessing.»

The sexton was leading the way with the oil lamp and the deacon was following, carrying the Holy Grail. When they entered the humble, little house, they saw her children, grandchildren, and other relatives around the deathbed, all of them weeping for they were about to lose this wonderful mother, granny and relative.

When the deacon moved inside, he stood still! What was that he was seeing? Something untold! This saintly little woman was not just circled by people but also by Angels and Archangels, who were swarming inside the room. They were rushing around her; who to be the first to touch, who to console, who to wipe the sweat from the brow of this most blessed woman!

And it wasn’t just this! Exactly by the head of the bed, was the Holy Mother of God, who was holding a godly tissue and was wiping the sweat from her feverish forehead. The woman was whispering “Hail nymphe anymphefte”.

And- lo! and behold!-all the angels fell face down and worshiped the Holy Grail which was filled with the Holy Body and Blood of our Lord! All the angelic powers!! The Holy Mother, in some incomprehensible way, kissed the Holy Grail and let the deacon towards the dying woman.

After she took the Holy Communion, the angels took the soul of this blessed woman, handed it over to the hands of the Holy Mother and all of them ascended to Heaven. The whole room shone and smelled beautifully, while the deacon, full of wonder and delight, left and returned to the house of the rich man.

He went inside and shuddered! He saw hundreds of demons around the deathbed of this stingy man, who were brandishing horrible tridents and were jabbing at his body in various places: At the knees, the feet, the hands, the palms, the tummy, the throat, the eyes, the head… They were poking at all the body parts with which he had sinned. This pitiful, rich man was screaming! The deacon handed over the Holy Grail to the hands of the priest and passed out from fright…

The priest was still trying in vain to convince the rich man to prepare himself for the end. He would have none of this! Finally, he died without taking the Holy Communion and without confession.