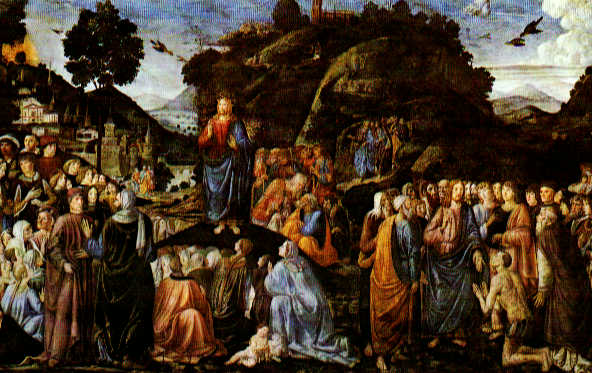 Worlds swarm around You, like bees around a cherry tree in blossom. One world pushes the other aside; one contests the patrimony of the other; one looks upon the other as an intruder in his home. All claim a greater right to You than You Yourself do.

From the effusion of Your fullness swarms are nourished, O inexhaustible Sweetness. All overeat, and all go away hungry.

Of all the swarms the human swarm leaves the most hungry. Not because You did not have food for men, O Master, but because they fail to recognize their nourishment, and so they contend with caterpillars for the same foliage.

Before all creatures, and before all time and sorrow. You, O Lord, formed man in Your heart. You conceived of man first, even though You manifested him last in the rosaries of creation-even as a gardener thinks about the blooming of a rose all the time he is digging and planting the dry rose stems -even as a builder experiences the joy of the domes while planning a church, even though he builds them last.

You gave birth to man in Your heart, before You began creating.

Help my mortal tongue to name this man, this radiance of Your glory, this song of Your blessedness. Should I call him the Ultimate Man? For just as He was contained in Your heart, so also was all the manifested world, including man and the heralds of man, contained in His mind.

And no one knows the Father except the Son, nor does anyone know the Son except the Father.1 You were like nirvana,” O Lord, until the Son was conceived within You, You were without number or name.

How shall I magnify You in the midst of a swarm of hungry caterpillars, which one wind blows onto the blossoming cherry tree and another blows off, and whose entire lifetime is spent between two winds?

O Lord, my dream day and night, help me to magnify You, so that nothing may become great in my heart except You.

Let all creatures magnify You, O Lord, lest they make themselves great instead of You.

Truly, You are exceedingly great, O Lord, would that all our hymns could make You greater!

Even when all the swarms of insects are blown off the blossoming cherry tree, the cherry tree remains the same in its majesty and vernal beauty.