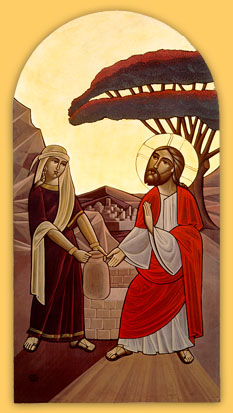 Modern Coptic icon of Christ with the Samaritan woman.

My dear, let it be the code and rule of our lives the saying of the Lord: «Do not judge».

Apparently a light commandment. Light, because if we examine it with some attention, we shall see that it is easy to avoid judging, to protect our soul and mouth from it. Besides judging is not something priorly rooted from birth and kneaded with our soul. It is something external, especially when judging is not born out of animosity or hatred but from superficiality and negligence and from the usual tendency to always talk about the others.
In fact, judging is not only a light but also a heavy sin, unfortunately extensively spread. We meet it everywhere. It consists of a much polluted atmosphere which we continually breathe. It is a common phenomenon that one can say it has become the norm for man. «Nothing is more pleasant to man, than to judge the actions of others» says Gregory the Theologian. Exactly because of this extensive spread of judging, makes this sin hard to fight and makes the divine commandment «do not judge» heavy.
No one can dispute this sad condition but also no right thinking person can seriously claim that he is justified in judging, since others judge. Woe to us if we used as criterion and rule of our ethical life the disorderly life of others. Our conscience herself, no matter how much she has been overshadowed by the prevailing confused and disordered condition of our society, will protest and condemn the judging. She will scream that the rule of our life must be not the voice and habits of the world but her voice, which in the final analysis is the voice of God. That is why every person finds the commandment of God «do not judge», correct and just, even if he is swept away in «judging».

«Do not judge!» Truly, why should we judge another? Why should we become involved with what others say or do? Who made us examiners, inspectors and judges of the behaviour of others? No one! Besides don’t we sin? On the contrary, the word of God many times and emphatically forbids this judging, this censuring of others. «Do not judge» commands the Lord. For only He has the right of judgment. He is the law maker and the judge. In His presence we are all accountable, all the people whether judging or judged. Therefore, the tendency and habit to judge and condemn the others is usurping and removing the authority and rights of the Lord. It is impiety against the just Judge Himself.
That is why the brother of the Lord James writes on the one who judges: «Do not speak evil against one another, my brothers. He who says evil against his brother or makes himself his brother’s judge, says evil against the law and is judging the law; and in judging the law you become not a doer of the law but a judge. There is one Judge and Law-giver, even He who is able to save or to destroy; but who are you to be your neighbour’s judge?» (James 4:11-12). And for you, yourself, God has enacted to respect and to love your neighbour. However, when you judge your brother, you trample and ignore the law of God, you condemn with your action and make void the law of God. You are no more the defender but the abolisher of the law and you present yourself, you a sinful person, with impudent pretence to judge others and usurp rights of others. This way with your judging you perpetrate a sin, perhaps graver than that which your brother committed.
And the Apostle Paul adds: «You are therefore without excuse, oh man, whoever you are that judges, for when you are judging another you are judging yourself, for you who judges do the same things» (Rom 2:1). We are all responsible in front of the Lord. To Him we will have to give account of our actions. Whenever you judge and condemn the other, what argument would you bring in front of the Lord and how would you dare ask for mercy and leniency? And just because you know how God angers against the sinners-and judging is sin- for this you will be found unforgiven at that great day of the Second Coming. Also consider that the person you judge, could repent, or has repented and could find mercy in front of God, be saved and glorified, while you could remain with the heavy guilt of condemnation. So while you condemn the other, you condemn yourself.
Heavy they appear these God inspired predications of the Holy Bible. Serious are the condemnations against judging. And just think they are not few. In many other instances the Holy Bible condemns with just strictness the judging because it considers it an impiety against God and lack of love for one’s neighbour. That is what Saint Chrysostom had in mind when he said: «Brothers, let us not be bitter judges and accusers of others that we may not be found seriously responsible against God. Let us not forget that we too have committed serious sins which need greater forgiveness. Let us therefore, be lenient towards the others no matter how badly they have sinned, that we may be assured of the mercy and leniency of God».