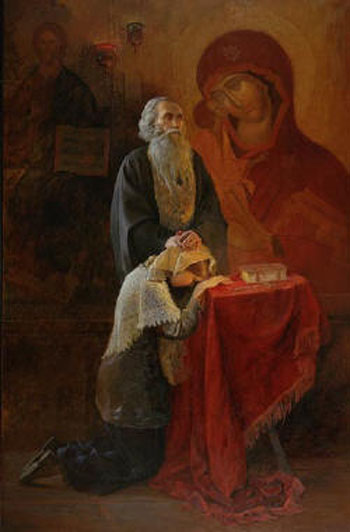 Perhaps the most misunderstood sacrament of the Christian Church is confession (or repentance). How did it originate? What role does a priest play? Is there a special procedure for confession? The Holy Scriptures hold answers to these questions.

God’s Word promises “If we confess our sins, He is faithful and just to forgive us and cleanse us from all unrighteousness” (1 John 1:9). The faithful are to bring their sins to God in repentance and receive cleansing and forgiveness.

The early Christians would stand and confess their sins to God in the presence of the whole congregation. Jesus encouraged His followers to walk in the light together, to confront problems corporately, to “tell it to the church” (Matt. 18:17). Thus James writes, “Confess your trespasses to one another” (James 5:16). But as time went on and the Church grew in numbers, strangers came to visit and public confession became more difficult. Out of mercy, priests began to witness confessions of sin privately on behalf of the Church.

Jesus, giving His disciples the authority to forgive sin, said, “If you forgive the sins of any, they are forgiven them; if you retain the sins of any, they are retained” (John 20:23; c.f. Matt. 16:19, 18:17-19). From the beginning, Christians understood that the grace of ordination endowed the shepherd of the flock with the discernment and compassion to speak the words of remission, on behalf of Christ, regarding the sins of those who confess and turn from sin. For God has promised the removing of sin from us “as far as the east is from the west” (Ps. 103:12). St. John Chrysostom says, “The priests decree below, God confirms above, and the Master agrees with the opinion of His slaves”.

“You did not choose Me,” Jesus told the Twelve, “but I chose you and appointed [ordained] you.” (John 15:16). To these same disciples Jesus promised, “It is not you who speak but the Holy Spirit” (Mark 13:11). Whom God calls, He equips. Paul writes to Timothy, “Stir up the gift of God which is in you through the laying on of my hands” (2 Tim. 1:6). It is the grace of the Holy Spirit which enables the priest to serve God and the people. Priests are only the visible instrument of God’s mercy at the performance of the Mystery, which is performed invisibly through them by God Himself. It is God (the Holy Triune) who forgives our sins.

Thus the Church has encouraged her faithful: If you know you have committed a specific sin, do not hide it but confess it before coming to the Holy Eucharist. St. Paul wrote, “Let a man examine himself, and so let him eat of the bread and drink of the cup” (1 Cor. 11:28), and “If we would judge ourselves, we would not be judged” (1 Cor. 11:31).

King David learned a lesson regarding his sin which is recorded for our benefit. For about a year, he had hidden his sins of adultery with Bathsheda and the murder of her husband (2 Sam. 11:1-12:13).Then, confronted by Nathan the prophet, David repented from his heart and confessed his sin in a psalm which is used for general confession to this day (Ps. 51). The joy of salvation was restored to him.

People ask, “Can’t I confess to God privately?” Certainly, though there is no clear biblical basis for it. Even general confession occurs in the Church. In His mercy, God provides the sacrament of confession (more properly called the sacrament of repentance) to give us deliverance from sin and from what psychologists call denial. It is easy to pray in isolation, yet never come clean. It is far more effective to confess aloud to God before a priest, and benefit from his guidance and help.

It is essential to remember that the remission of sins in the Sacrament is an act of mercy. It is given for our spiritual profit, “for edification, and not for destruction” (2 Cor. 10:8).

Thus we come before the holy icon of Christ, to whom we confess, and are guided by the priest, our spiritual father, in a cleansing inventory of our lives. When we tell God all, naming our sins and failures, we hear those glorious words of freedom which announces Christ’s promise of forgiveness of all our sins. We resolve to “go and sin no more” (John 8:11).

A Preparation for Confession

God does not desire the death of a sinner, but rather that he turn away from his sins and live. In the Holy Sacrament of Penance we have the means whereby we may obtain forgiveness of our sins, and be restored to the favour of God, our heavenly Father.

In order that you may make a good confession it is necessary for you to prepare yourself carefully. Ask God to give you Grace to make a thorough examination of your conscience, courage to make a sincere and complete confession, and strength to amend your way of life in the days to come.

Begin your examination with the time of your last Confession; try to recall whether you omitted anything through carelessness or lapse of memory, or from fear of embarrassment. Examine yourself with the assistance of the form of self-examination according to the Ten Commandments of God which follows.

It is most necessary that you be truly sorry for the sins which you have committed, and that you firmly purpose amendment of your manner of living.

Self examination based on the Ten Commandments

Have I believed in God the Father, the Son, and the Holy Spirit? Have I failed to trust in God and His mercy? Have I complained against God in adversity? Have I been thankful for God’s blessings? Have I doubted the Christian faith and the teachings of the Church? Have I tried to serve God and keep His Commandments? Have I given way to superstition? Have I frequented the religious meetings of heretics and schismatics? Have I neglected my duties to God through fear of ridicule or persecution? Have I failed to pray to God faithfully’? Have I put myself before God?

Have I made an idol of any person or thing? Have I given to anyone or anything the worship that is due to God alone? Have I set before myself the Holy life of Jesus and tried to imitate Him? Have I read the Holy Scriptures regularly? Have I been irreverent during Church Services, let my attention wander, or been insincere? Have I neglected to receive Holy Communion regularly or without due preparation?

Have I profaned the Holy name of God in any way? Have I cursed anyone or anything, or sworn a false oath? Have I failed to give proper reverence to holy persons and things? Have I had due respect for the clergy of the Church or hindered them in performing God’s work? Have I broken any solemn vow or promise? Have I entered into any unlawful contract or made an unlawful promise?

Have I stayed away from Church on Sundays or prevented others from going? Have I done unnecessary work on Sundays? Have I spent the day in unwholesome fashion or profaned it by improper conduct? If I could not go to Church because of illness or other grave cause, have I prayed at home? Have I caused anyone else to profane the Lord’s Day? Have I kept the Fasts and Festivals prescribed by the Church?

Have I respected my parents and been obedient to them? Have I been guilty of deception, or caused them pain by my words or actions? Have I neglected them or failed to help them? Have I done my duty towards my family? Have I been wanting in love or kindness towards my husband (or wife), or harmed him (or her) in any way ? Have I set my children a good example and tried to bring them up properly? Have I corrected their faults with patience and not with anger? Have I over-indulged or spoiled them? Have I neglected my God-children and failed in my obligations towards them. Have I worked for my employers honestly and diligently? Have I treated fairly all those who have worked for me? Have I honoured God as my Heavenly Father by treating others as my brothers, and have I honoured the Church as my spiritual Mother by honouring and practicing my religion in accordance with her teachings?

Have I caused the injury or death of any one, or wished that I were dead? Have I done anything to shorten my own life or that of someone else by injuring health, or through evil and intemperate living? Have I given way to anger, or harmed others with words or actions? Have I defamed others who needed help, or failed to stand up for those unjustly treated? Have I been cruel to anyone? Have I mistreated animals or destroyed any life unnecessarily? Have I failed to forgive anyone or harboured evil thoughts against them?

Have I given way to impure thoughts, words, or deeds? Have I committed any unworthy actions alone or with others? Have I degraded myself in any way, or forgotten human dignity? Have I read immoral books or magazines, or delighted in obscenity of any kind? Have I associated with bad companions or frequented unsavoury places? Have I eaten or drunk or smoked too much? Have I been lazy, idle, or wasted my time? Have I led others to commit sinful acts? Have I been unfaithful to any trust confided in me?

Have I stolen anything or wished to do so? Have I kept anything that did not belong to me? Have I tried honestly to find owners of lost articles I have found? Have I cheated anyone? Have I paid my debts? Have I lived within my income, and not wastefully and extravagantly? Have I given to charitable causes in proportion to my means? Have I been honest and upright?

Have I told lies, or added to or subtracted from the truth? Have I made careless statements or spoken evil of anyone? Have I told any secrets entrusted to me, or betrayed anyone? Have I gossiped about anyone or harmed their reputation? Have I concealed the truth, assisted in carrying out a lie, or pretended to commit a sin of which I was not guilty? Have I tried to see the good in others rather than their shortcomings?

Have I envied anything good that has come to others? Have I been jealous of another’s good fortune? Have I wished for anything that was another’s? Have I damaged or destroyed the property of others? Have I wished for things God has not given me, or been discontented with my lot? Have I been stingy? Have I held back anything due another? Have I hoped for the downfall of anyone so that I might gain by it? Have I failed to be gracious and generous to anyone. Have I expected God to give me that which I would refuse one of my fellow men?

Sayings from the Holy Fathers

“When the first order of angels fell from the angelic glory and became demons, the other nine orders humbled themselves and worshipped the All-Holy Trinity, and remained in their place and rejoice forever. We, too, my brethren, must reflect what an evil thing pride is – that it cast down the devil from angelic glory and he will always burn in Hell – and that humility kept the angels in Heaven, and they rejoice perpetually in the glory of the Holy Trinity. Let us then, my brethren, avoid pride, because it is the first daughter of the devil, it is a path that leads to Hell; and let us have humility, because it is angelic, and is a path that leads to Paradise”.